A 70-year-old man presented with progressive decline in his functional status, cachexia and resting shortness of breath. He had long-standing history of heart failure due to non-ischemic dilated cardiomyopathy with an ejection fraction of 15% treated with cardiac resynchronization and guideline-directed medical therapy. He had history of ventricular tachycardia, non obstructive coronary artery disease, chronic kidney disease stage III, atrial fibrillation and left atrial appendage closure. On admission, his blood pressure was 74/40 mmHg, heart rate of 70 bpm and with adequate oxygen saturation. Physical examination revealed a cachectic man with anasarca, distended jugular veins and cold extremities compatible with hypoperfusion. He was admitted to the cardiac intensive care unit and inotrope support with dobutamine and IV diuretics were initiated. He was inotrope dependent and was discharged home with dobutamine infusion at 5mcg/kg/min. A week later he presents to the emergency room with worsening heart failure and ventricular tachycardia. This time, his white cell count was elevated and eosinophilia was noted. During this admission, he developed fevers, elevated liver enzymes and creatinine. A thorough infectious workup was done and revealed no bacterial, viral or parasitic infection.

What would you do next?

The correct answer is: C. Discontinue dobutamine and change to another inotrope.

The highlight of this case is to identify the features of eosinophilic myocarditis (EM) and to discontinue the culprit agent. The worsening of heart failure symptoms associated with new onset eosinophilia and fevers raised the clinical suspicion of drug-induced eosinophilia (Figure 1). Endomyocardial biopsy is a valuable tool to confirm the diagnosis, and should be the best next step after discontinuation of the offending drug. In this patient, the biopsy showed moderate interstitial infiltrate of eosinophils (Figure 2). The eosinophilia and liver enzymes returned to baseline after discontinuation of dobutamine, and the patient underwent a Left Ventricular Assist Device (LVAD) with milrinone as the inotrope of choice in the perioperative period. A biopsy of the apical core during LVAD implantation showed no evidence of myocarditis. Steroids have been shown to be an effective approach to treat eosinophilic myocarditis but usually this therapy is reserved if there is no response to discontinuation of dobutamine. Steroids should be carefully used prior to major surgery as they increase the risk of infections and delay wound healing.

Eosinophilic myocarditis (EM) is a rare but potentially life-threatening complication of drug therapy. Although the exact incidence is unknown, its prevalence in heart transplant recipients has been reported from 2.7%1,2 to 7%3,4. Eosinophilic infiltration of the myocardium is occasionally observed as an incidental histopatologic finding in explanted hearts (reported in up to 23%)5

Patients with advanced heart failure are generally treated with multiple medications, which have been associated with EM; therefore its presence is elevated in heart transplant candidates. These medications include furosemide, angiotensin-converting-enzyme inhibitors, spironolactone, antibiotics, beta-blockers, digoxin and inotropes4. In the past decade, dobutamine has emerged as a common cause1,2,6, although is not clear whether the causative agent is the drug itself or its preservative sodium bisulfate6-10. Signs and symptoms of EM are non-specific and difficult to evaluate due to the underlying reduced heart function. It may manifest as tachycardia, worsening of heart failure, ventricular arrhythmias (potentially due to fibrinoid necrosis)4,7 with or without fever and rash. Clinical suspicion is crucial for further workup and prompt diagnosis7,8.

Peripheral eosinophilia is an important clue for the diagnosis of EM, as it is seen in 80 to 90% cases 1,2,4. However, cases with no or negligible eosinophilia have also been described after a short period of exposure to dobutamine (less than 30 dyays)9. Peripheral eosinophilia has a broad differential and needs to be appropriately worked up to exclude allergic, immunologic, infectious, parasitic and neoplastic conditions. When eosinophilic infiltration of the myocardium is seen, other etiologies of myocarditis such as Chagas or Churg-Strauss, hypereosynophilic syndromes like Davie's endomyocardial fibrosis, Loeffler's endocarditis8 and Drug Reaction with Eosinophilia Systemic Symptoms (DRESS) should be considered.

Endomyocardial biopsy is the gold standard for the diagnosis; however, its sensitivity is close to 50% as the infiltrates are often focal8,9. The presence of peripheral blood eosinophilia on admission or the new appearance of eosinophilia during hospitalization should prompt the consideration to repeat a biopsy if initial testing does not lead to a diagnosis8. The diagnosis can also be made by stopping and reintroducing dobutamine and evaluating clinically and with serial white cell counts (Koch's postulates to establish a causative relationship)7.

EM usually resolves by discontinuation of drug and this should be the first step when EM is clinically suspected, followed by changing to another inotrope (possibly one that does not contain sodium bisulfite). When dobutamine induced EM is diagnosed, this agent should be avoided in the LVAD and heart transplant postoperative period, as it is possible that the drug can potentially lead to de novo heart failure or can contribute to it. Newer evidence has shown that there is no persistence of EM in transplanted hearts4, although there might be an increased frequency of late acute cellular rejection2. More so, the overall survival after heart transplant is not influenced by the prior EM and patients should not be removed from list as the post-transplant prognosis is favorable1,2. We recommend the use steroids only when there is no response to withdrawal of dobutamine and a biopsy shows EM.

Figure 1: Eosinophilic response during dobutamine administration. Dobutmine was started at a rate of 5mcg/kg/min (red asterisk), then increased to 8.5mcg/kg/min (green asterisk) and discontinued (red arrow). 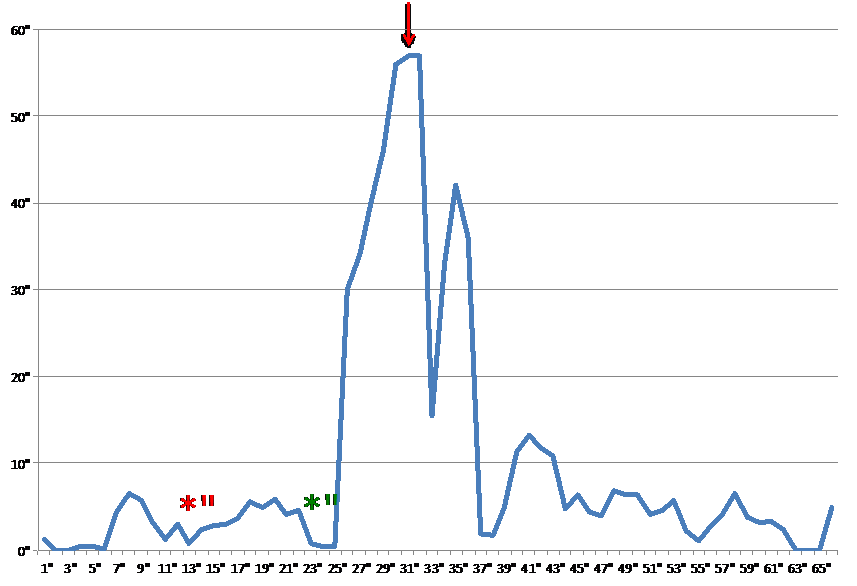 YOU ARE HERE: Home > Education and Meetings > Fever and Hypereosinophilia