Heard High and Low: What Is It?

A 63-year-old white male presented with altered mental status after falling off a couch. Initially, he was found in hemorrhagic shock as a result of splenic laceration and acute upper gastrointestinal bleed. He was fluid resuscitated and stabilized. Past medical history was significant for end-stage renal disease on hemodialysis, alcoholic cirrhosis, hyperlipidemia, and hypertension. Hospitalization was complicated by Enterococcus faecalis sepsis, and appropriate antibiotics were started. A concern for endocarditis has been raised. An echocardiogram was performed, as shown below. 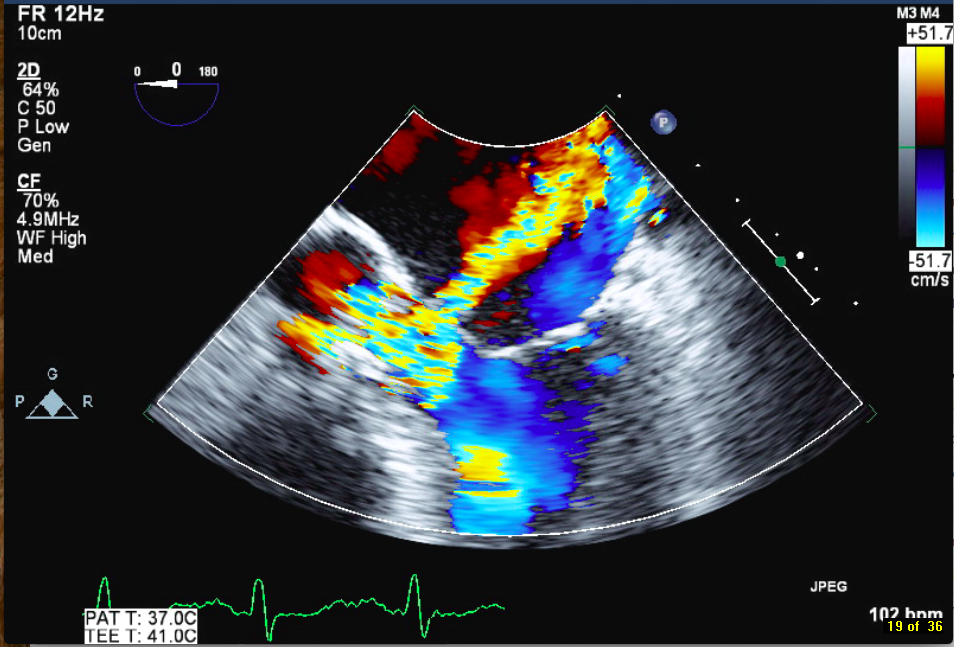 What is the most likely diagnosis?

A transesophageal echocardiogram with 2D imaging and color flow Doppler shows moderate-to-severe mitral regurgitation with perforation of the A1/A2 segment of the anterior leaflet of the mitral valve. It also shows an aortic valve vegetation and severe aortic regurgitation, suggesting endocarditis.

The case illustrates progressive native valve endocarditis secondary to Enterococcus species, which affected both the aortic and mitral valves. Enterococcus faecalis is the third main cause of IE worldwide, and it is gaining relevance, especially among healthcare encounters. Left-sided native valve IE accounts for fewer than 6.2 cases per 100,000 person-years in the developed world.1,5 Valve perforation following IE can lead to severe valve destruction, severe valve incompetence, intractable heart failure, and subsequent high hospital mortality. Although its frequency is not well recognized, it was reported in earlier autopsy studies2 and subsequent echocardiography reports3 with incidence in less than 35% in the latter. Perforation of the mitral valve is more common than perforation of the aortic valve and is correlated with hemodialysis, severe valvular insufficiency, and significant morbidity and mortality.4,5 Because physical examination in this condition may be misleading, echocardiography serves as the cornerstone for early diagnosis and early definitive surgery because antibiotics are very unlikely to yield any improvement in valvular regurgitation resulting from a significant perforation.

YOU ARE HERE: Home > Education and Meetings > Heard High and Low: What Is It?