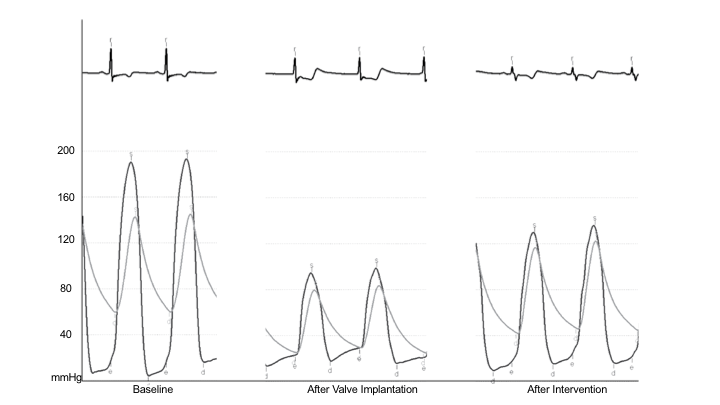 What was the cause of the patient's hemodynamic decompensation, and what acute intervention was performed?

Although telemetry showed ST-segment depression, ascending angiography confirmed patent flow in the ungrafted right coronary artery as well as diagonal vein graft, making it less likely that coronary ischemia (answer C) was the cause for hypotension. The patient was known to have a patent left internal mammary artery to left anterior descending that was unlikely to have been affected during TAVR from a transfemoral approach. Unchanged heart borders on fluoroscopy and LV-aortic pressure waveforms without significant respiratory variation (pulsus paradoxus) make pericardial tamponade (answer D) a less-likely etiology for hypotension. A transthoracic echocardiogram performed following prosthetic balloon post-dilatation did not show pericardial effusion. Telemetry immediately following valve deployment shows a junctional rhythm without bradycardia (answer E). A junctional rhythm is associated with loss of the contribution of atrial systole to LV diastolic filling, but it is unlikely to explain the changes in the LV-aortic pressure waveforms noted as well as the aortic root angiography findings.

YOU ARE HERE: Home > Education and Meetings > Hemodynamic Assessment of Cardiogenic Shock During TAVR