Editor's Note: This Patient Case Quiz is based on a presentation from the 2017 Care of the Athletic Heart Meeting. Details and registration information for 2018 will be posted on ACC's Meetings page as they become available.

A 17-year-old black male high school elite athlete (basketball player) was referred for cardiology evaluation for left ventricular hypertrophy on electrocardiogram (ECG) and history of sudden death of his father. His father was hospitalized following a massive heart attack in his 30s. Although the family was told he "had the heart of a 75-year-old man," an autopsy was not performed. The paternal grandmother also had a cardiac history significant for two heart surgeries, the first being in her early 30s and the second in her 60s for a "blocked valve."

A complete 2-D echocardiogram performed at an outside hospital was reportedly normal and he was referred to the cardiomyopathy clinic given his father's history and him being an athlete. He reported being asymptomatic, very active with good exercise capacity playing basketball for many years, and regularly working out in the gym. A couple of times he felt quite tired during practice and had to sit for a few minutes with spontaneous resolution of symptoms. He reported consuming about 50-60 oz of fluids per day. 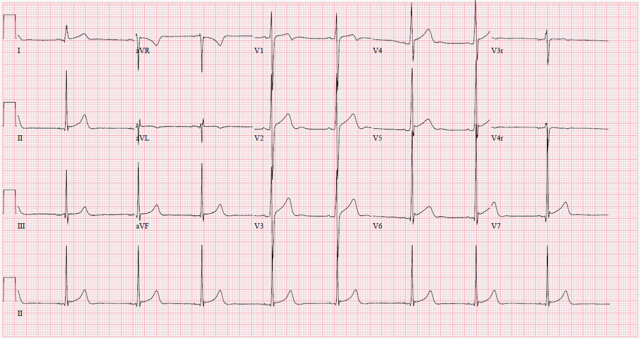 Video 1A and 1B. Echocardiogram showing prominent trabeculations in the left ventricle (LV). The non-compacted to compacted ratio in end-systole ranges from 1.9-2.2 concerning for LV non-compaction. The LV is mildly dilated with mildly depressed systolic function (measured ejection fraction of 48% by Simpson's biplane method).

Which of the following is the next best step?

In such scenario, pursuing additional testing is necessary to differentiate physiologic changes in athletes from true LVNC.

The initial recommendation to the athlete, following evaluation by the cardiomyopathy team, was to start enalapril and restrict from competitive sports. The athlete and family were not satisfied and sought a second opinion without starting any medication. In the meantime, the mother signed a waiver with the school and he continued to play competitively. Upon further evaluation in clinic, as the athlete and family requested, additional testing was pursued. A treadmill stress test was performed using the Bruce protocol. The patient achieved 85% of his maximal age-predicted heart rate and endurance was at the 90th percentile for age (17 minutes, 20.3 METS), peak MVO2 was 56.4 ml/kg/min (114% predicted), anerobic threshold reached at 78% of his MVO2, and oxygen pulse was at 132% predicted.

On cardiac magnetic resonance imaging (CMRI) (Figure 2, Video 2), the LV appeared mild to moderately dilated with an end-diastolic volume of 123 cc/m2. The LV function was borderline depressed with EF of 50%. The LV appeared significantly trabeculated along the entirety of the free wall. The diastolic non-compacted to compacted ratio ranged from 2.1-2.6. The right ventricle (RV) was mild to moderately dilated with a right ventricular end-diastolic volume of 130 cc/m2. The RV function was low normal to mildly depressed with an EF of 47%. Prominent trabeculations were also seen along the RV free wall at all ventricular levels (Figure 2, Video 2). Pharmacologic stress was performed using regadenoson and, after achieving appropriate increment in heart rate, there was normal myocardial perfusion at peak stress (Video 3) with no regional wall motion abnormalities. Also, there was no evidence of delayed myocardial enhancement. A stress echocardiogram was performed 4 months after the prior echocardiogram, which showed normal biventricular systolic function at rest with EF of 63% and no wall motion abnormalities. At peak stress, hyperdynamic systolic function with EF of 79% was seen with no regional wall motion abnormalities (Video 4). 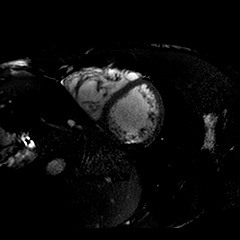 Video 2. Cardiac MRI, showing mild to moderately dilated left ventricle (LV) with an end-diastolic volume of 123 cc/m2. The LV function is mildly depressed with ejection fraction of 50%. The LV is significantly trabeculated along the entirety of the free wall. The non-compacted to compacted ratio ranged from 2.1-2.6. The right ventricle (RV) is mild to moderately dilated with a RV end-diastolic volume of 130 cc/m2. The RV function is low normal to mildly depressed with an EF of 47%. There are prominent trabeculations along the RV free wall at all ventricular levels.

Additional testing in this setting provided additional data to further the discussion with the athlete and his family. The CMR data did show (and reported) current criteria for LVNC, though such criteria are disputable, especially in the black race where ventricular hypertrabeculation is not uncommonly observed. Additionally, there was the presence of mild dilation and mild systolic dysfunction with no myocardial perfusion and/or wall motion abnormalities, and absence of delayed myocardial enhancement. Given that many athletes of black race have increased LV hypertrabeculations that are consistent with the conventional criteria for LVNC,1 this athlete fit the "grey zone" between physiologic adaptation in a highly trained athlete and true LVNC. With a shared decision-making approach, the athlete and family decided to continue with competitive sports participation upon discussion of the results of studies performed and the current available data with continued annual follow up. The patient was advised to optimize hydration, especially during practice, and to ascertain that automated external defibrillator (AED) is available at all times as part of an emergency action plan.

Cardiac adaptation, namely ventricular hypertrophy, in athletes has been extensively studied. Isotonic exercise/endurance training can increase preload causing increase in LV end-diastolic dimension and wall thickness, and generally leads to eccentric remodeling.2-4 On the contrary, isometric exercise/strength training increases afterload and leads to concentric LV remodeling.2,3 Endurance training can also lead to RV dilation, but does not occur with strength training.3 It is speculated that the combination of increased preload and afterload that occur with a variety of exercises and other low risk conditions may contribute to the finding of increased trabeculations in athletes.1,5 Indeed, in the study by Gati et al.,1 18% of elite athletes demonstrated increased LV trabeculations and almost 10% of athletes fulfilled established echocardiographic LVNC criteria in studies by Jenni and Chin.6,7 Of those fulfilling LVNC criteria, a small proportion of athletes (10, 0.9%) demonstrated reduced LV systolic function (EF<50%) and marked repolarization changes in addition to the echocardiographic criteria for LVNC.1 These patients did not have any adverse events in 4 years of follow up with unrestrictive exercise/sports participation.1

The new international recommendations for ECG interpretation in athletes considers isolated ECG criteria for left ventricular hypertrophy as non-specific.8 However, black athletes who demonstrate inferolateral T wave inversions in two or more contiguous leads or non-black athletes with T wave inversions in anterior leads should be considered abnormal findings and need further work-up.8 Given the non-specific morphologic diagnostic criteria for LVNC, these will require further refinements especially in the athletic population. We believe future athletic algorithms may ultimately include, in addition to imaging LVNC criteria, the combination of pathologic T wave inversion on the ECG, systolic dysfunction that does not improve with stress, significant increase in LV end diastolic dimension, and/or LV diastolic dysfunction.

Athletes can exhibit substantial changes as part of ventricular adaptation to exercise which can overlap the non-specific diagnostic criteria of LVNC. Advanced imaging and functional assessment during provocative stress are helpful tools to evaluate these athletes that fall into the so called "grey zone." Shared decision-making is an integral part of the evaluation and empowers athletes and families to make informed decisions on return-to-play.

YOU ARE HERE: Home > Education and Meetings > Left Ventricular Hypertrabeculations in an Athlete: Diagnostic Conundrum