An 82-year-old male patient presented for elective computerized tomography (CT) guided biopsy of a mediastinal mass. He reported dyspnea on exertion for the past 2 months. He had a past medical history of coronary artery disease status post coronary artery bypass graft surgery (left internal mammary artery to left anterior descending [LAD] artery, saphenous vein graft [SVG] to first obtuse marginal, and SVG to posterior descending artery [PDA]) in 2010. He underwent cardiac catheterization 1 year ago for unstable angina that showed occluded vein graft to the PDA, and other grafts were widely patent. The native coronary artery was stented. The patient has a history of paroxysmal atrial fibrillation on anticoagulation and hypertension. He has been compliant with his medications. His vitals were stable, and his examination was unremarkable. His chest roentgenogram showed a mass in the right cardiophrenic angle. A CT of the chest with intravenous contrast to evaluate the mass showed a right side anterior mediastinal mass measuring 5.8 x 6.3 x 5.4 cm. The attenuation within the lesion was solid. There was no evidence of mediastinal lymphadenopathy.

The patient presented to the interventional suite for biopsy. The biopsy needle was inserted in the right chest wall and directed to the mass. Frank blood was aspirated. An aortogram was performed; see Images 1 and 2 that follow. 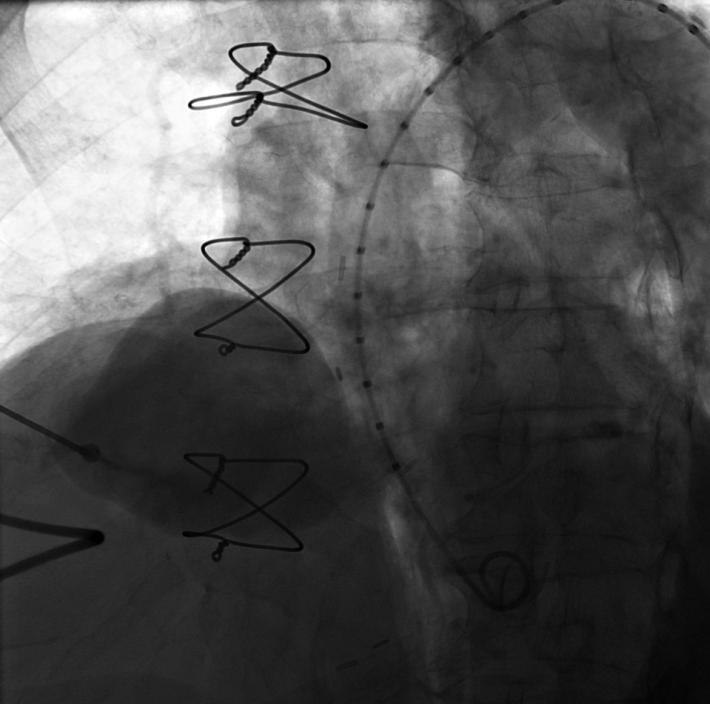 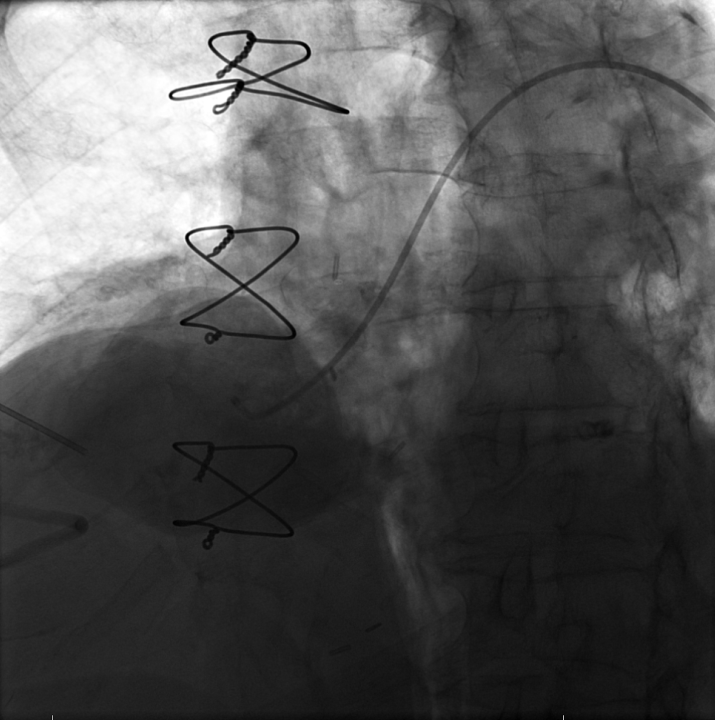 What is the patient's diagnosis?

A 10 mm vascular plug was used to close the neck of the pseudoaneurysm via the percutaneous approach. Contrast injection through the biopsy needle confirmed a good seal at the level of the neck without any communication with the aorta. Subsequently, 300 units of thrombin were injected into the sac via the biopsy needle. The patient tolerated the procedure well and was advised to follow with an arterial phase contrast CT of the chest in 4-6 weeks before resuming anticoagulation.

The SVG pseudoaneurysm was first reported in 1975. In one series, the incidence was reported to 0.07%, but it is likely underreported because the majority of cases are clinically silent.1 Etiologies differ based upon time of presentation or diagnosis. Early vein graft pseudoaneurysms (fewer than 12 months) are secondary to graft infection, intrinsic wall weakness, and factors related to harvesting and grafting of the saphenous vein. Late aneurysms (more than 12 months) are due to atherosclerotic degeneration and endothelial dysfunction.2,3

Clinical presentation can vary from incidental finding on imaging in asymptomatic patients to chest pain and rarely shock, syncope, or hemoptysis. Pseudoaneurysms are highly prevalent in the graft to the RCA followed by LAD.2 Contrast CT scan is the initial test of choice. Coronary angiography is both diagnostic and therapeutic in patients for whom the percutaneous approach is used to treat the aneurysm. Treatment is guided by presence of symptoms, patency of the graft, percentage of myocardium at risk, and operative risk. Percutaneous closure with a transcatheter atrial septal defect occlusion device, covered stent, or coil embolisation is best suited in patients with occluded graft and suitable anatomy. Surgery with ligation/resection of a pseudoaneurysm is reserved for patients who are not candidates for percutaneous closure.4

YOU ARE HERE: Home > Education and Meetings > Mediastinal Mass