During the patient's physical exam, his vital signs were a heart rate of 80 bpm, irregularly irregular pulse, respiratory rate of 22 breaths per minutes, and blood pressure of 140/90 mm Hg, SaO2 = 88%. He had a short, thick neck (neck circumference = 18 inches), his breath sounds were diminished, and his heart sounds were distant. He had no evidence of jugular venous distention or lower extremity edema.

An electrocardiogram showed AF with ventricular response ranging about 59-83 bpm and borderline R wave progression (Figure 1). Low voltage was present diffusely, which is a nonspecific finding that might be seen with obesity. 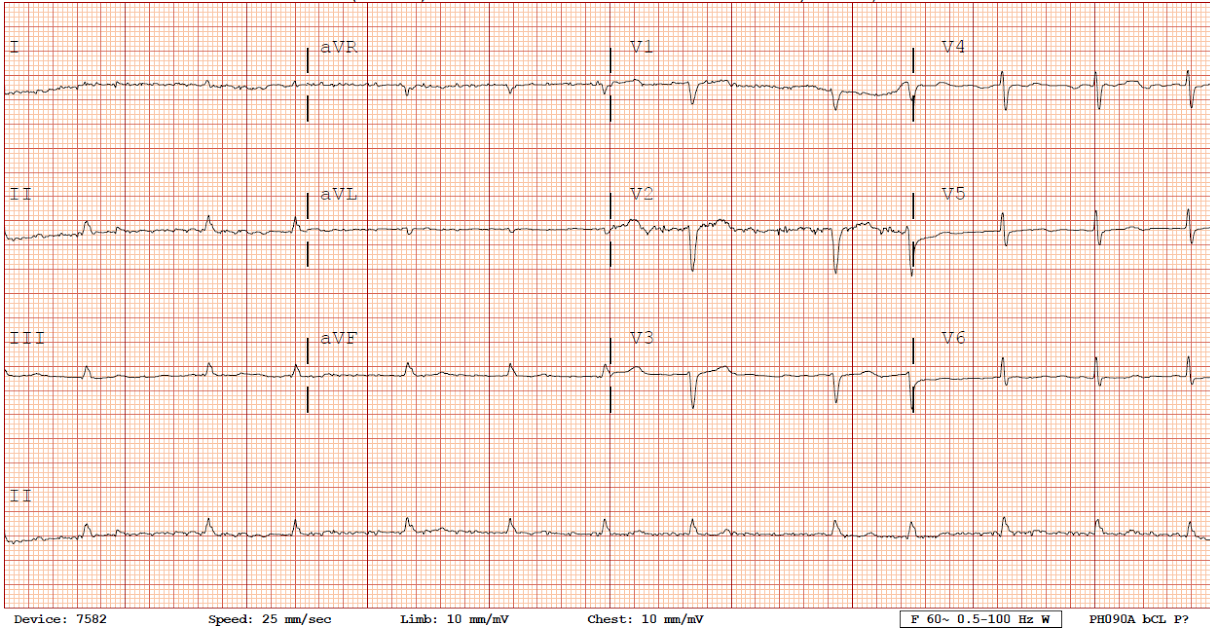 In the echocardiogram, the left ventricular ejection fraction appeared to be 50-55%. The left ventricle appeared to be normal in size, but the right ventricle was severely dilated. The right and left atrium were also severely dilated. Right ventricular systolic pressure was moderately elevated (45.4mm Hg), and there was severe tricuspid regurgitation (Figure 2). 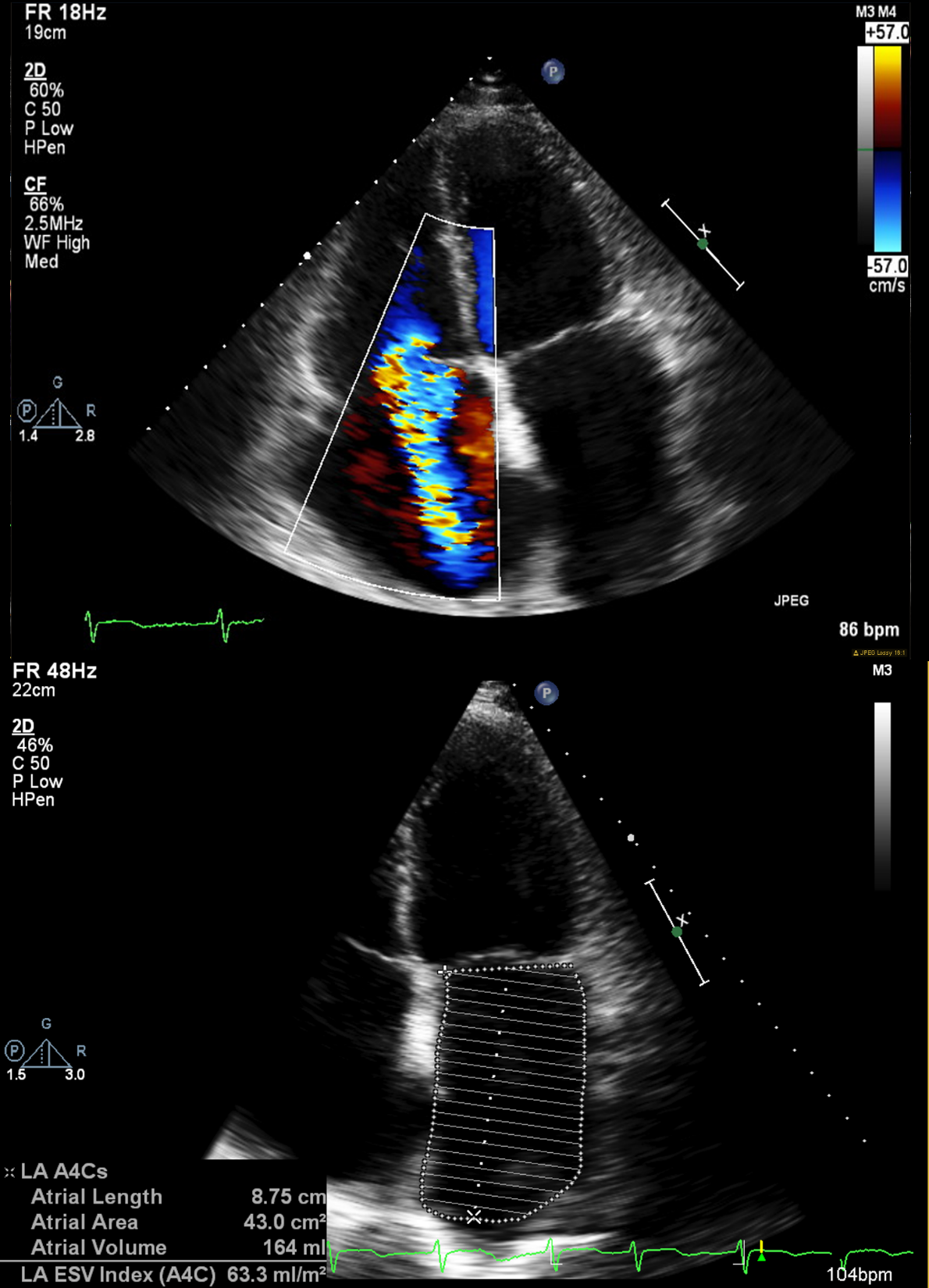 Which of the following is the best course to prevent recurrence of AF?

The correct answer is: B. Discuss re-ablation and evaluate for obstructive sleep apnea (OSA).

The recurrence of AF after catheter ablation is an important limitation in the treatment of AF. Early recurrence following catheter ablation is common and is a strong predictor of later recurrence. Hypertension, hyperlipidemia, diabetes mellitus, duration and type of AF, male gender, and increasing age are associated with AF recurrence.1 Several studies report a strong relationship between OSA and recurrent AF after ablation.2-4 The patient's age, neck circumference, and obesity along with presence of AF and hypertension increase the likelihood of OSA. Therefore, screening for OSA is worthwhile. Overnight polysomnography is the gold standard of diagnosing OSA.5 HST is an alternative diagnostic test to in-laboratory polysomnography for OSA patients. HST should should be reserved for patients with a high suspicion for OSA and not be performed in patients with co-existing cardiopulmonary disease because of the lack of evidence-based data.6

The patient's nocturnal polysomnography showed severe sleep apnea with an Apnea-Hypopnea Index value of 30 episodes per hour with several hypopneic episodes. OSA induces hypoxia and hypercapnia, oxidative stress, endothelial dysfunction, and inflammation and causes hyperactivity of cardiac autonomic nervous system and atrial remodeling. These factors increase the likelihood of new-onset and recurrent AF after catheter ablation in OSA patients.7 In the meta-analysis of 6 studies, patients with OSA were found to have a 25% greater risk of AF recurrence after catheter ablation than those without OSA (risk ratio 1.25; 95% confidence interval [CI], 1.08-1.45; p = 0.003). OSA that is diagnosed using polysomnography is a strong predictor of AF recurrence (risk ratio 1.40; 95% CI, 1.16-1.68; p = 0.0004).8 CPAP is a gold standard for OSA therapy. It is associated with low blood pressure, decreased atrial size, and better control of Alzheimer's disease in OSA patients. AF patients with OSA respond poorly to medical treatment as well as to ablation and cardioversion without appropriate CPAP therapy.7 Fein and colleagues reported higher recurrence of AF following ablation in CPAP nonusers (hazard ratio 2.4, p < 0.02). Daily CPAP therapy for at least 3 months resulted in higher AF-free survival rate (71.9% vs. 36.7%, p = 0.01).2 Patel et al. reported similar results for a median 32 months follow-up period (68% AF-free survival rate in CPAP users vs. 79% in nonusers, p = 0.003).3 It is important to note that although many observational studies support the use of CPAP therapy to prevent AF recurrence in OSA patients, no randomized clinical trials have been published to support that approach with evidence.

The use of antiarrhythmic drugs for 6 weeks after ablation is associated with decreased early recurrence of AF but not with AF recurrence at 6 months.9 However, amiodarone is not very suitable for young individuals due to its frequent side effects. Pokushalov et al. compared the efficacy of pharmacological therapy versus re-ablation in patients after failing initial therapy with ablation. AF recurrence was higher in patients treated with antiarrhythmic therapy instead of second ablation (79% vs. 25%, respectively; p < 0.01). The rate of progression to persistent AF was also higher in the medically treated group (23% vs. 4%, respectively; p < 0.01).10

Patients with overlap syndrome (coexistence of both OSA and COPD) have higher morbidity and mortality. CPAP therapy is associated with improved survival rate in these patients. In a study by Marin et al., patients with overlap syndrome who were not treated with CPAP had higher mortality (relative risk 1.79; 95% CI, 1.16-2.77) and COPD exacerbation rate (relative risk 1.70; 95% CI, 1.21-2.38) than COPD-only patients. In contrast, there was no increased risk for either outcome in overlap patients treated with CPAP.11 Severe nocturnal hypoxia in overlap patients contributes to development of cor pulmonale, and overlap patients with cor pulmonale have poor prognosis. Oxygen therapy alone is not recommended as the primary treatment of OSA. Gottlieb et al. evaluated the effect of CPAP and nocturnal oxygen therapy on markers of cardiovascular risk in patients with OSA. There was no significant difference in the 24-hour mean arterial pressure between the control group and the group receiving oxygen. In contrast, 24-hour mean arterial pressure at 12 weeks was lower in the group receiving CPAP than in the control group (–2.4 mm Hg; 95% CI, –4.7 to –0.1; p = 0.04) or the group receiving supplemental oxygen (–2.8 mm Hg; 95% CI, –5.1 to –0.5; p = 0.02).12 In overlap syndrome, supplemental oxygen may provoke hypercapnia and prolong duration of nocturnal apnea.13 Oxygen administration leads to an early initial decrease in minute ventilation with an elevation of PCO2. Oxygen also induces a rightward shift of the CO2 dissociation curve, resulting in increase of PCO2. Therefore, answer A is incorrect.

YOU ARE HERE: Home > Education and Meetings > Recurrent AF After Ablation