51-year-old female with no past medical history presents with sharp substernal chest pain of 3 days' duration associated with tachycardia and dyspnea on exertion. The pain was pleuritic and worse in the supine position with partial relief with sitting upright. Of note, she was started on prednisone taper (40mg, 10mg taper per week) for lower extremity peripheral sensory neuropathy 2 weeks prior to presentation. Electrocardiogram at presentation was notable for subtle PR segment depression, as shown in Figure 1. She was diagnosed with acute pericarditis and an echocardiogram was performed which reveals a normal left ventricular ejection fraction and a small circumferential pericardial effusion as shown in Figure 2. 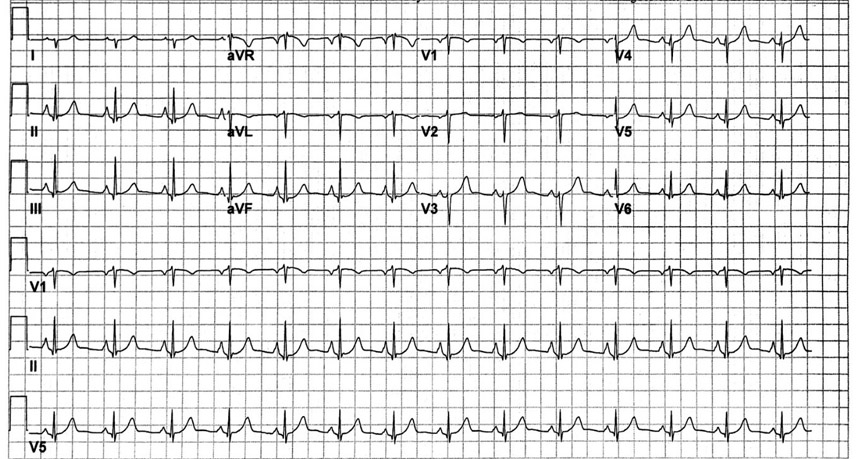 In addition to the prednisone taper, she was treated with aspirin 875mg three times per day and colchicine 0.6mg twice daily for 6 weeks with resolution of all symptoms. 3 months after discontinuation of all medications, she develops a recurrence of symptoms with pleuritic chest pain and fatigue. Dual anti-inflammatory therapy is resumed and continued for the next 8 months because of recurrent symptomatic flares with attempted weaning. Due to her persistent symptoms, she can no longer work as a primary care physician and is subsequently started on prednisone 50mg once daily. After 1 month of therapy, she has improvement in her symptoms and underwent cardiac magnetic resonance imaging which shows minimal pericardial inflammation, as seen in Figure 3. However, the patient does not tolerate tapering of the prednisone to less than 10mg/day. She is subsequently started on azathioprine 50mg twice daily as a steroid sparing agent but is still not able to be tapered to less than 10mg/day of prednisone due to recurrence of chest pain and dyspnea symptoms. Laboratory studies are obtained periodically during flares of symptoms which show normal erythrocyte sedimentation rate (ESR) and c-reactive protein (CRP). Azathioprine is discontinued and patient is referred to you for further management. 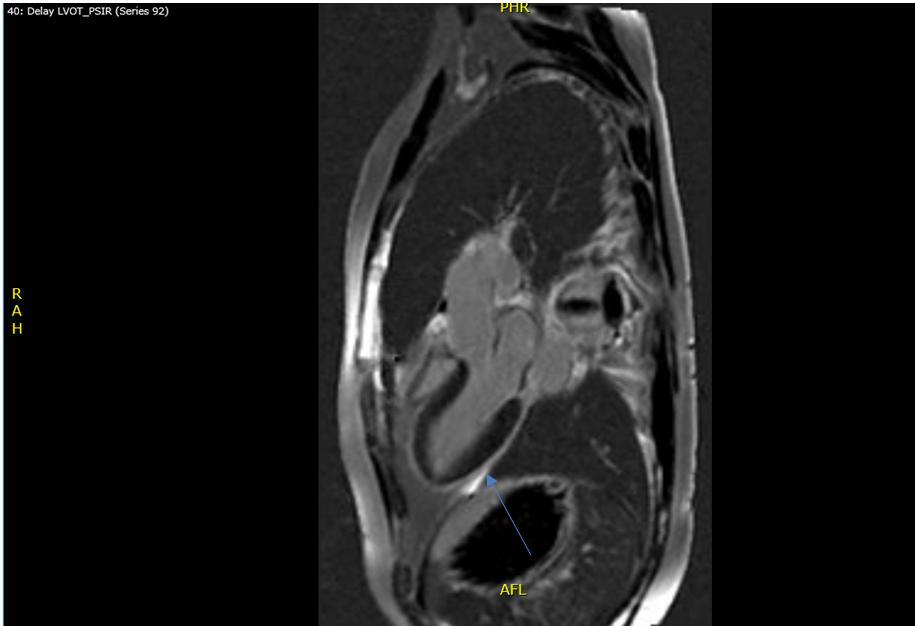 Which of the following is the best next step in the management of this patient?

The correct answer is: B. Start anakinra 100mg subcutaneously daily.

Recurrent pericarditis is an under recognized, highly morbid complication of acute pericarditis with an incidence reported between 15-50%.1 Defined as a recurrence of symptoms after a six week symptom free period, recurrent pericarditis is thought to be an autoimmune disease, though at present, the pathophysiology underlying this condition is poorly understood. Presenting symptoms typically are similar to the initial acute presentation and include pleuritic chest pain which is exacerbated in the supine position, though some patients present with chronic fatigue in addition to chest pain, similar to other chronic inflammatory diseases. Electrocardiographic findings include diffuse ST segment elevation and PR segment depression though the electrocardiogram can often be normal as well.

The European Society of Cardiology published guidelines in 2015 outlining the management of acute and recurrent pericarditis based on currently available published data.2 First line treatment of recurrent pericarditis is aspirin and colchicine dual therapy. Colchicine has been shown to reduce the incidence of recurrent pericarditis when added to aspirin/non-steroidal therapy.3,4,5 Low to medium dose corticosteroids are recommended for management of refractory recurrent pericarditis despite NSAID/aspirin plus colchicine therapy with high dose corticosteroids being associated with increased risk of chronicity and recurrences.6 If corticosteroids are used, tapering should be performed in small increments with the entire taper often taking months to complete. In the event of a flare during steroid tapering, every effort should be made to not aggressively increase the steroid dose as this tends to favor chronicity. Thus, option A is not desirable in this clinical scenario.

Patients who are unable to entirely taper off corticosteroids are considered corticosteroid dependent and the use of steroid sparing agents such as azathioprine or other immunomodulators such as an IL-1 receptor antagonist, anakinra, can be considered. Azathioprine has been shown to reduce risk of recurrence in steroid dependent recurrent pericarditis with relative risk of 0.34 (P<0.0001).7 For patients who are on azathioprine but still unable to tolerate steroid weaning, the guidelines do not specify further treatment algorithms. In this clinical vignette, the patient continues to have quality of life limiting symptoms while on azathioprine, steroids aspirin, and colchicine, thus continuing current therapy (option C) is not appropriate.

IL-1 receptor antagonist, anakinra, has emerged as a potential treatment for this group of patients. Anakinra was first shown to be effective in treating recurrent steroid dependent pericarditis in the pediatric population in 2009 with numerous small studies showing rapid improvement in symptoms and normalization of inflammatory markers.9 Similar results have been reported in adult patients in numerous small studies with symptomatic improvement reported within 2-5 days of initiation of treatment and successful weaning of steroids in the majority of patients.10 The only randomized trial to date evaluating the efficacy of anakinra is a double-blinded, placebo controlled withdrawal trial by Brucato et al. which randomized 21 patients with steroid dependent recurrent pericarditis to anakinra therapy versus placebo for 6 months after a 2 month run in period.11 Remarkably, no patients in the anakinra arm had recurrences over 6 months but all patients in the placebo group had a recurrence over the same time period. The findings from this study not only highlight the efficacy of anakinra therapy but also shed light on the high rate of symptomatic recurrence upon drug discontinuation. To date, no studies have been performed to evaluate the optimal tapering regimen or duration of therapy for anakinra in this patient population. Importantly, anakinra appears to be safe in this patient population with injection site skin reactions being the most commonly reported side effect though practitioners must keep in mind the increased risk of infection that has been reported in patients treated with anakinra for other autoimmune or rheumatologic conditions.12 Thus, initiation of anakinra in this patient would be the appropriate next step with the goal of obtaining symptom relief and successfully tapering of the steroid therapy.

YOU ARE HERE: Home > Education and Meetings > Recurrent Pericarditis: When Steroids Just Don't Cut It