Review of symptoms was positive for nonadherence to his anti-epiletic medications, progressive numbness and tingling in bilateral hands, erectile dysfunction, abdominal distension, decreased appetite, orthopnea, and lower extremity and facial edema. He noted that his mother had a similar complex of symptoms in advanced age.

On physical exam, he was tachycardic with mild respiratory distress with a temperature of 97.6 degrees Fahrenheit, heart rate of 87 bpm, blood pressure of 150/86 mm Hg, respiratory rate of 35 breaths per minute, and oxygen saturation of 100% on 2 L/min nasal cannula. His exam was significant for mild periorbital darkening, slight scalloping of the tongue, jugular venous distension of 14 cm H2O with Kussmaul's sign, a slightly laterally displaced point of maximal impulse with a regular rate and rhythm, a loud pulmonary component of the second heart sound, bibasilar pulmonary rales, a distended abdomen with a fluid wave and hepatomegaly, and 1+ lower extremity edema to his knees with bilateral biceps rupture. Laboratory data revealed normal renal and hepatic function with mild normocytic anemia and an elevated troponin T level of 0.08 ng/mL. His electrocardiogram showed normal sinus rhythm with nonspecific intraventricular conduction delay, left atrial abnormality, evidence of prior inferior and anteroseptal myocardial infarctions (MIs) and low voltage in the limb leads. Chest radiograph demonstrated cardiomegaly and decreased lung volumes. 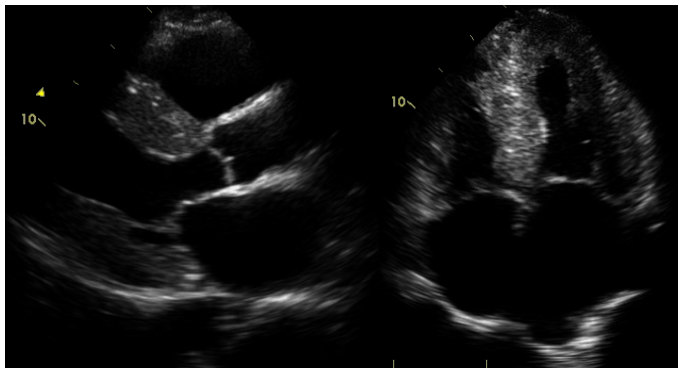 Serum immunofixation and serum and urine protein electrophoresis were negative. Kappa light chain level was mildly elevated at 20.9 mg/L. A fat pad biopsy was negative for amyloid deposition. He was treated with intravenous furosemide, labetalol, and lisinopril. His course was complicated by paroxysms of atrial fibrillation, for which he was initiated on anticoagulants.

A technetium-99m pyrophosphate single-photon emission computed tomography (SPECT) with computed tomography for attenuation correction was performed following intravenous administration of 20.8 m Ci of technetium-99m pyrophosphate at rest with imaging immediately and 60 minutes after administration. Cardiac and whole body images were obtained. These images demonstrated qualitatively uniform mild left and right ventricular uptake that was greater to the uptake in the ribs and sternum without evidence of extracardiac uptake aside from degenerative changes of bilateral, shoulders, and the right great toe (Figure 3). Cardiac uptake was also demonstrated in short axis images (Figure 4). These findings were all consistent with the diagnosis of TTR cardiac amyloidosis. 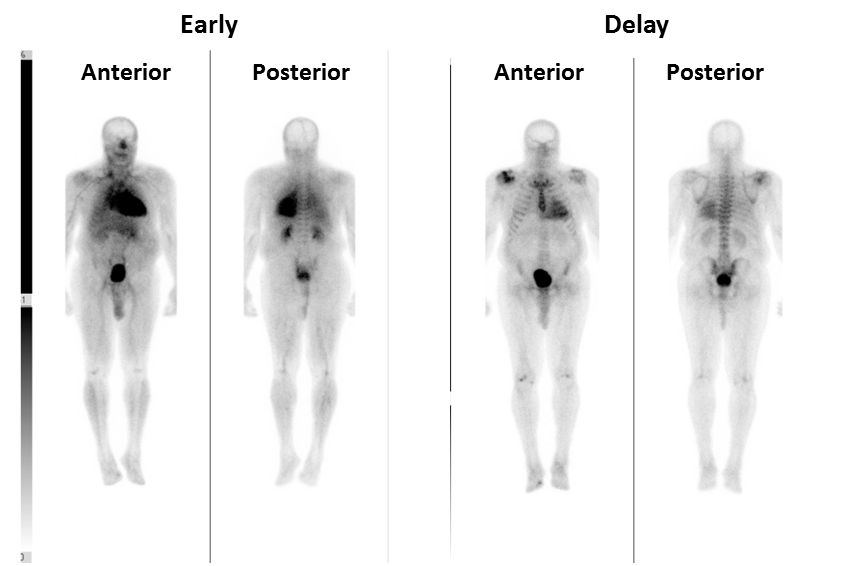 He was discharged on a beta-blocker, diuretics, and an angiotensin-converting enzyme inhibitor but continued to experience dyspnea on exertion.

In order to confirm the diagnosis and facilitate enrollment in a clinical trial, a right heart catheterization and endomyocardial biopsy were pursued with findings of elevated right atrial pressure of 14 mm Hg, elevated right ventricular pressures of 57/17 mm Hg, elevated pulmonary artery pressure of 56/17, and normal pulmonary capillary wedge pressure of 15 mm Hg. Six biopsy specimens were obtained from the right ventricle. Pathology was negative for active inflammation and MI but demonstrated amorphous, palely eosinophilic, extracellular material with positive Congo red and sulfated Alcian blue stains (Figure 5). Subsequent genetic assessment was positive for the isoleucine 122 variant of TTR amyloidosis, and the patient was thereafter enrolled in the trial. Since enrollment, he has remained clinically stable with symptoms of New York Heart Association Class II congestive heart failure. 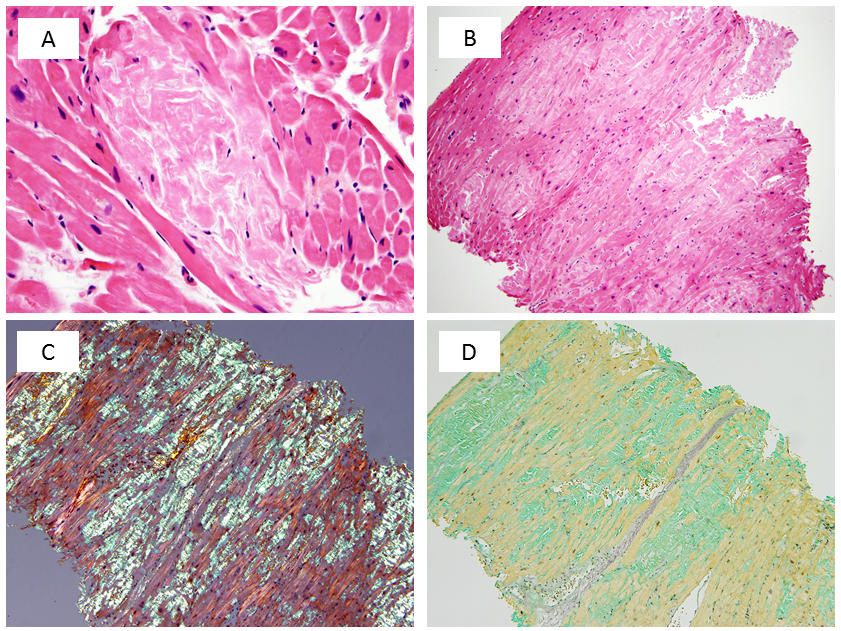 Which of the following statements is correct about the role of bone scintigraphy in patients with suspected cardiac amyloidosis?

The correct answer is: A. Intense (equal or greater than bone) myocardial uptake of bone-seeking radiotracers in the absence of light chain gammopathy in blood/urine is a marker of TTR amyloidosis.

It has been shown that intense bone tracer uptake on SPECT imaging is consistent with TTR amyloid cardiomyopathy due to wild-type or hereditary disease.1,2 Tracer intensity is correlated with disease severity.1 Although light chain amyloid is rarely associated with mild or moderately positive bone scintigraphy,3,4 the absence of a light chain gammopathy in a patient with amyloid cardiomyopathy is diagnostic for TTR or TTR-related amyloidosis.5

In a study that excluded patients with light chain amyloid, Quarta et al. showed significantly increased bone tracer uptake in TTR amyloidosis in comparison to older adults with other causes of LVH. These findings were confirmed with endomyocardial biopsy and genetic testing. Ultimately, tracer uptake equal to or greater than bone was 100% sensitive and specific for TTR amyloidosis in the study population of 67 patients.2 A specificity of 88% for TTR amyloidosis with the bone tracer 99m Tc-3,3-diphosphono-1,2-propanodicarboxylicacid has been reported,6 and a specificity of 100% was reported in a study using technetium-99m pyrophosphate to compare TTR and light chain amyloid cardiomyopathy.3

Glaudemans et al. demonstrated that bone scintigraphy demonstrated diffuse myocardial uptake of tracer in all included patients with known TTR cardiac amyloidosis, regardless of whether they met echocardiographic criteria for the diagnosis.7 Patients with early pathology are known to infrequently have echocardiographic evidence of amyloid cardiomyopathy.6 Another study demonstrated that a number of patients with early TTR amyloidosis had low-level myocardial bone tracer uptake on SPECT imaging and abnormal T1 signaling on magnetic resonance but had no evidence of late gadolinium enhancement.8 MRI has limited specificity due to the wide range of patterns that may be present in amyloid cardiomyopathy.9 These results indicate that bone scintigraphy has a significant role beyond echocardiography and MRI in the early diagnosis of TTR cardiac amyloidosis.

Technetium-99m pyrophosphate is one of several bone tracers with an affinity for calcium-containing compounds. It has been hypothesized that the affinity for amyloidosis is related to an increased concentration of myocardial calcium in patients with TTR and TTR-related amyloidosis.10,11 As a consequence, any process that increases myocardial calcium, including coronary atherosclerosis and prior MI, could lead to increased cardiac uptake of these tracers. As previously noted, low to moderate uptake in amyloidosis related to light chain deposition has been observed.3,4

YOU ARE HERE: Home > Education and Meetings > Technetium-99m Pyrophosphate SPECT for TTR Amyloid