A 72-year-old Caucasian woman with past medical history relevant for anthracycline-induced cardiomyopathy was closely being followed in the cardiology clinic since undergoing orthotropic heart transplant 25 years ago. Her post-transplant course was complicated by chronic kidney disease (due to long-term calcineurin inhibitor use) and atrial arrhythmias, including typical atrial flutter. As a result of injury to the tricuspid valve apparatus during previous right ventricular endomyocardial biopsies, the patient developed symptomatic, severe tricuspid regurgitation and underwent surgical tricuspid valve replacement approximately 12 years ago with a 33-mm Medtronic Hancock II bioprosthesis. Over the last six months, the patient developed severe lower extremity edema, which was not responding to increasing doses of oral diuretics.

The patient was seen and evaluated in the cardiology clinic with physical exam as below.

The patient was diagnosed with symptomatic, severe tricuspid regurgitation and initially referred to surgery for valve replacement, which would represent her third open-heart surgery. The cardiothoracic surgeon raised obvious concern for a hostile chest and believed that another surgery would be risk prohibitive. Therefore, deployment of a transcatheter heart valve in the preexisting tricuspid valve bioprosthesis was proposed as an alternative. In the interim, the patient underwent right ventricular lead extraction and removal of her single-lead pacemaker, given she no longer was pacer dependent and the possibility of pacemaker lead-induced tricuspid stenosis existed.

Due to continued symptoms of right-sided heart failure and severe tricuspid stenosis following right ventricular lead extraction, percutaneous placement of an Edwards SAPIEN XT transcatheter heart valve (Edwards Lifesciences, CA) in the tricuspid position became necessary. After obtaining informed consent from the patient for this "off-label" use of the transcatheter heart valve, the patient successfully underwent implantation of a 29-mm Edwards SAPIEN XT valve within the pre-existing tricuspid valve bioprosthesis via transfemoral venous access, under general anesthesia, and with transesophageal echocardiography-guidance. She was discharged to a rehabilitation facility two weeks later with much improved peripheral edema and stable renal function, after a brief period of anuria due to contrast-induced nephropathy. 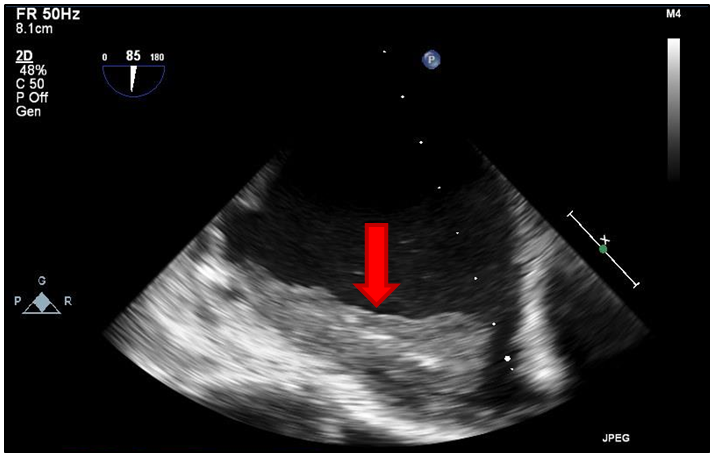 Transesophageal echocardiography during transcatheter heart valve placement demonstrates organized thrombus in the right atrium (indicated by the red arrow). Right atrial thrombus was known to be present prior to the procedure (which necessitated anticoagulation therapy), but was not considered an absolute contraindication to proceeding with the valve-in-valve procedure. 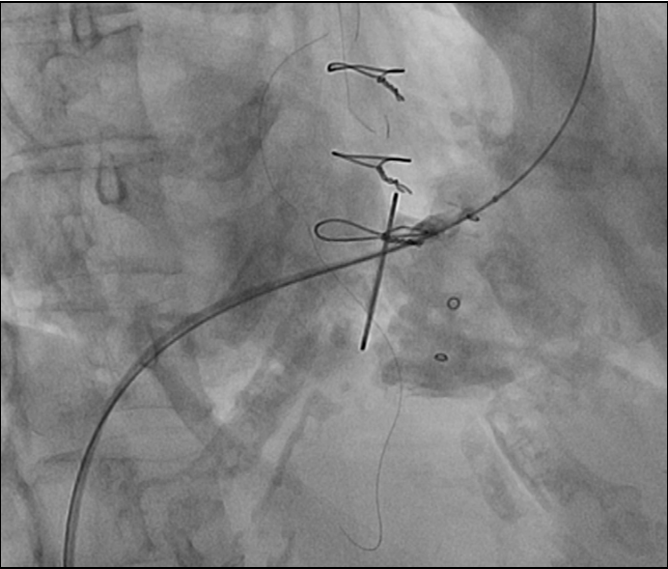 Right ventricular angiogram demonstrating at least moderate tricuspid regurgitation (in addition to the patient's known severe tricuspid stenosis). A Multi-Track angiography catheter is positioned distal of the tricuspid bioprosthesis over a 0.035-inch curved Lunderquist wire with tip (not seen) in a segmental branch of the right pulmonary artery. 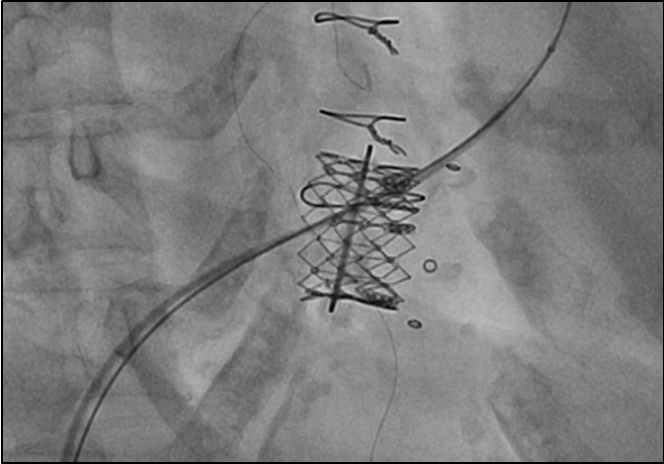 Successful deployment of a 29-mm Edwards SAPIEN XT transcatheter heart valve inside a 33-mm Medtronic Hancock II bioprosthesis in the tricuspid position. Catheter pullback from the right ventricle into the right atrium and across the newly deployed valve demonstrated a diastolic gradient <2 mmHg.

Transcatheter heart valve implantation as part of a valve-in-valve procedure is a viable alternative to surgical valve replacement for bioprosthetic valve dysfunction. In this case, there was careful consideration about the next best step in management after the diagnosis of right heart failure due to severe tricuspid stenosis was established. A re-operative valve replacement would represent a third-open heart surgery for this patient and be exceedingly high risk. Therefore, a percutaneous approach was chosen.

When considering a percutaneous approach as part of a valve-in-valve intervention, there are several important factors that need to be considered.

Which of the following statements is correct regarding transcatheter heart valve implantation?

Choice A is incorrect. In the United States, the CoreValve System (Medtronic, Inc., MN) is the first and only transcatheter heart valve system currently approved by the Food and Drug Administration for valve-in-valve procedures in the aortic position for both high and extreme risk patients who have limited options or may otherwise go untreated1. Because this self-expanding valve can only be mounted in one direction within the restraining sheath, the valve is limited to delivery in retrograde fashion via transfemoral, subclavian, or transaortic access. A 29-mm Edwards SAPIEN XT valve was used in this case "off label" for treatment of bioprosthetic valve dysfunction in the tricuspid position. It was deployed in antegrade fashion via a transfemoral venous approach.

Choice B is incorrect. It is well known that re-operative valve replacement carries a higher risk of morbidity and mortality as compared to initial valve replacement, regardless of the cause of bioprosthetic failure. However, valve-in-valve procedures do offer a less invasive alternative with a 30-day all-cause mortality rate of 4.2%, according to one recent study2.

Choice C is incorrect. In a recent publication, Dvir et al. evaluated a multinational valve-in-valve registry of patients with degenerated aortic bioprosthetic valves undergoing valve-in-valve implantation between 2007 and 20133. The overall 1-year Kaplan-Meier survival rate was 83.2% (95% CI, 80.8%-84.7%). Patients in the stenosis group had increased 1-year mortality in comparison with the regurgitation group and the combined group (P = 0.01). In addition, patients with small valves (≤21 mm) had worse 1-year survival versus with intermediate-sized valves and with large valves (≥25 mm) (P = 0.001).

Choice D is the correct answer. Ideal deployment of a transcatheter heart valve inside a surgical bioprosthetic valve requires the use of fluoroscopic landmarks to identify the sewing ring or "neoannulus". This enables a secure fixation of the transcatheter heart valve without an unnecessarily low position4. Proper sizing of the transcatheter heart valve is also important. Stent internal diameters for surgical bioprosthetic valves are reported by industry as the stent diameter without leaflets. However, when leaflet tissue is mounted inside the stent, the internal diameter is reduced. So, in the case of this patient, the true internal diameter of the 33-mm Medtronic Hancock II is actually 28 mm (not 30 mm, as reported by the manufacturer). For this reason, a 29-mm Edwards SAPIEN XT valve was used.