A 30-year-old female patient with past medical history of alcohol abuse presented to a community hospital after she had collapsed at home. Initial rhythm upon emergency medical service arrival was noted to be ventricular fibrillation (VF) (Figure 1). Cardiopulmonary resuscitation was initiated, and the patient was shocked twice with success, intubated, and transported to the hospital. Upon arrival to the hospital, the patient again developed VF, which was cardioverted successfully, and was started on amiodarone drip. In the interim, the patient also developed hypotension requiring norepinephrine drip vasopressors. The initial laboratory work revealed cardiac troponin I level of 2.7 ng/ml and no electrolyte abnormalities. Baseline electrocardiogram (ECG) showed sinus tachycardia, premature ventricular contractions, and a QTc interval of 420 ms (Figure 2). Also noted in the ECG was the terminal slurring of the QRS in the inferolateral leads, suggestive of a J-wave/early repolarization pattern. The patient continued to have multiple runs of ventricular tachycardia (VT) and VF, requiring electrical shocks and further addition of lidocaine drip (Figure 3). Due to ongoing hemodynamic decompensation, the patient was transferred to the tertiary care center for further management. Of note, the patient's family reported that the patient had had multiple emergency department visits in the past month for difficulty breathing, skipped heart beats, and decreased exercise tolerance prior to this episode. The family also reported that the patient had contact with a sick child a few days' prior, upper respiratory symptoms 6-7 weeks before this presentation, and a recent episode of self-resolved diarrhea. On arrival to the tertiary center, an emergent bedside echocardiogram was performed, which showed ejection fraction (EF) of 6-10% with global cardiomyopathy (Video 1). The patient was taken for emergent coronary angiogram for suspected acute coronary syndrome, which showed normal coronaries (Figure 4) and severely depressed EF (Video 2). While in the cardiac catheterization laboratory, the patient again had multiple runs of VT/VF, requiring 15 shocks. 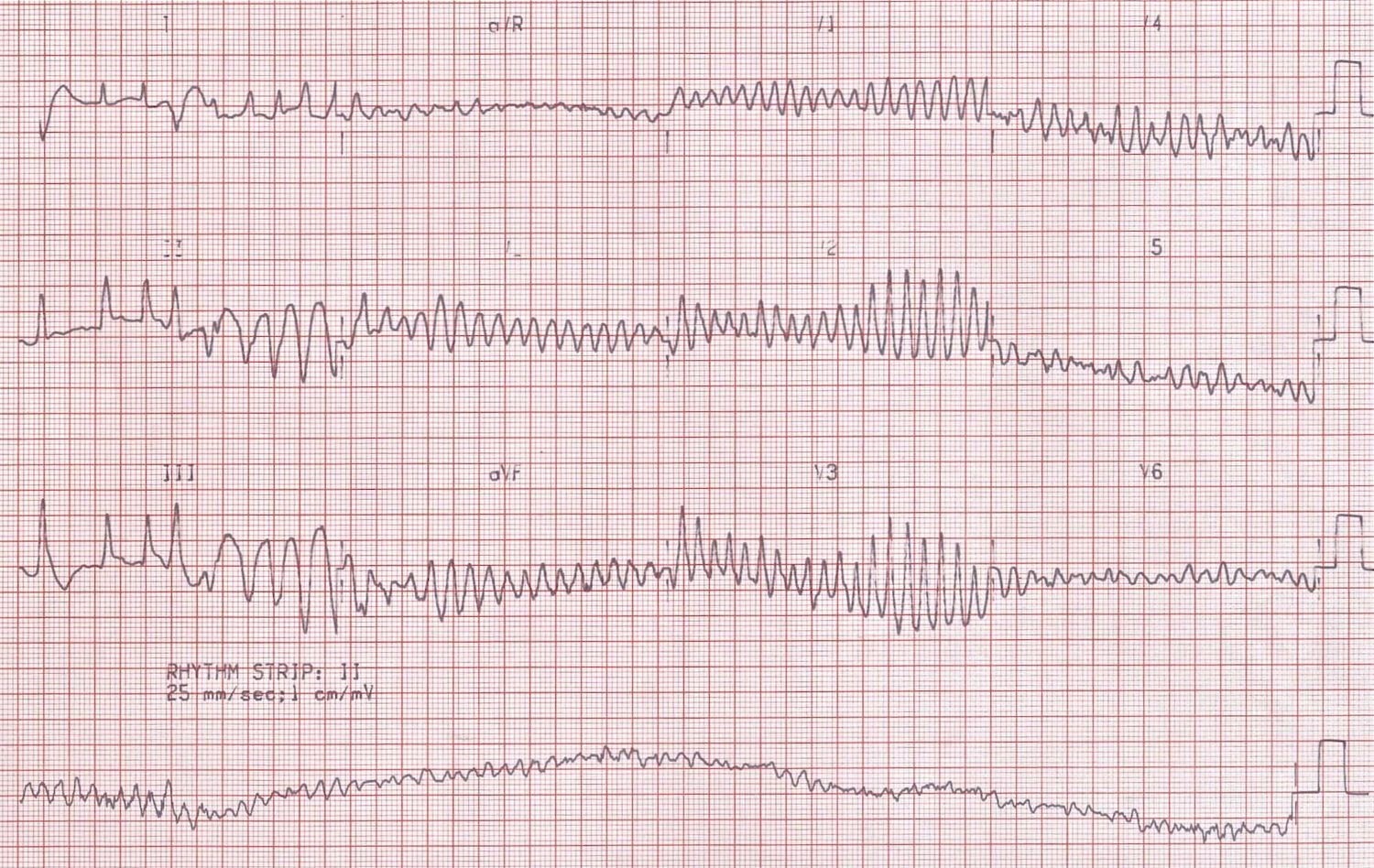 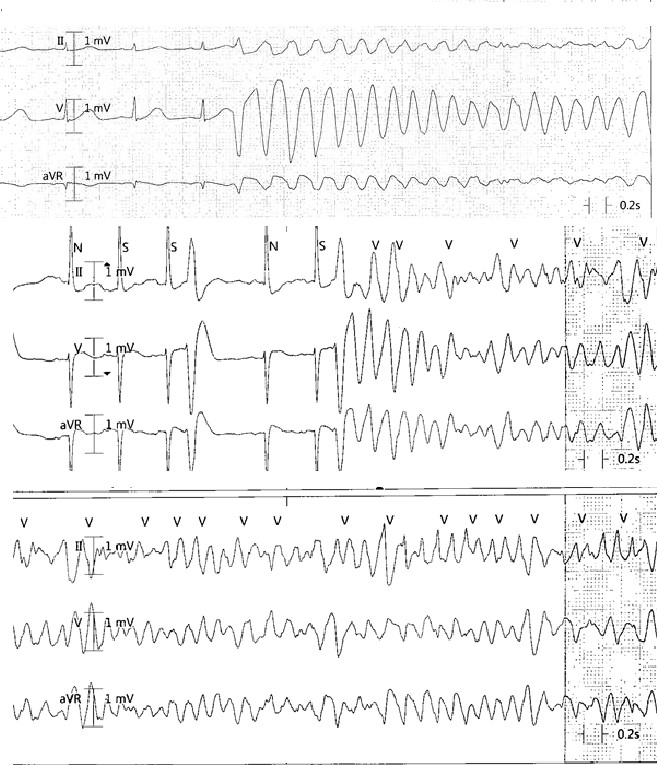 What is the best next step in the management of incessant electrical storm in this patient?

The patient likely has fulminant myocarditis, causing the electrical storm and hemodynamic instability and resulting in cardiogenic shock. This patient would benefit from mechanical circulatory support for achieving hemodynamic stability and controlling the electrical storm. The devices available to provide mechanical support to the left ventricle (LV) include ECMO, intra-aortic balloon pump, Impella (Abiomed; Danvers, MA), and TandemHeart (CardiacAssist, Inc.; Pittsburgh, PA). ECMO is a mechanical device used commonly for circulatory support in cardiac arrest and refractory cardiogenic shock.1 Although ECMO can provide adequate circulatory support to end organs, the main drawback is that it provides no LV unloading.2 The inadequate unloading of the LV results in elevated LV end diastolic pressure, increased myocardial stress, and continued electrical instability.2 Ventricular unloading in this situation can be achieved by using an Impella LV support device. The Impella is a small rotary pump commonly used to treat cardiogenic shock. It is inserted retrograde across the aortic valve and provides ventricular support, increasing cardiac output. The reduction in ventricular loading reduces myocardial oxygen demand and increases myocardial blood flow.3 The patient described in this case received mechanical hemodynamic support with Impella 2.5 and venoarterial ECMO. In addition, the patient was started on high-dose steroids for suspected myocarditis (maximum cardiac troponin level = 5.30 ng/ml). The patient's electrical storm terminated shortly after receiving mechanical cardiac support. Cardiac biopsy could not be obtained to confirm the diagnosis of myocarditis, but a cardiac magnetic resonance imaging performed after clinical stabilization showed subepicardial late gadolinium enhancement involving the anterolateral wall of the LV midlevel segment and mid-wall late gadolinium enhancement involving the inferolateral wall of the LV midlevel segment, suggestive of myocarditis.

Electrical storm is defined as three or more sustained episodes of VT, VF, or appropriate implantable cardioverter-defibrillator shocks in a 24-hour period.4 Management of electrical storm is challenging, and the treatment options are tailored according to the patient's hemodynamic status. Various management options include adrenergic blockade, anti-arrhythmic drugs, VT catheter ablation, anesthetic agents, and mechanical support. Electrical storm activates the sympathetic nervous system, and beta-blockers play a key role in the management of electrical storm.5 Beta-blockers, especially the non-selective agents, have been shown to increase the VF threshold and decrease the incidence of sudden death.4 However, this patient presented with cardiogenic shock requiring vasopressor support and was therefore not considered a candidate for beta-blocker therapy. Amiodarone is widely used in the treatment of electrical storm. When compared with placebo in the ARREST (Amiodarone for Resuscitation After Out-of-Hospital Cardiac Arrest Due to Ventricular Fibrillation) trial, amiodarone improved survival-to-hospital admission rates in patients who had an electrical storm.6 Similarly, lidocaine has often been used for management of ischemia-induced electric storm with American College of Cardiology/American Heart Association guidelines providing Class IIb recommendation for lidocaine use in the treatment of polymorphic VT that is associated with ischemia.7 Other anti-arrhythmic medications that have been reported to be effective in electric storm are sotalol and dofetilide. The patient in this case was already being treated with amiodarone and lidocaine drips without clinical response, and addition of another anti-arrhythmic drug was unlikely to be successful in suppressing these arrhythmias. Furthermore, these drugs can increase potential for pro-arrhythmia and can cause other drug-associated toxicities.

With advancement of mapping and ablation techniques, catheter ablation of VT can be performed more effectively and safely. Several studies have shown promising results with catheter ablation.4 Patients who have episodes of electrical storm despite amiodarone therapy may be candidates for radiofrequency ablation.8 However, this patient's electrical storm was associated with non-arrhythmia-related hemodynamic instability that precluded catheter ablation as the primary management option for this patient. Catheter left stellate ganglion blockade and thoracic epidural anesthesia have also been reported to be effective in suppressing electrical storms resistant to anti-arrhythmic agents and beta blockade. These modalities directly target the nerve fibers innervating the myocardium and reduce the adrenergic tone.9 Further studies are needed to better establish their role in the management of electrical storm before adapting these techniques into routine practice.

YOU ARE HERE: Home > Education and Meetings > When the Storm Strikes Hard: Incessant VT/VF Complicated by Cardiogenic Shock