Editor's Note: This Patient Case Quiz is based on a presentation from the 2017 Care of the Athletic Heart Meeting. Save the date for the 2018 meeting, taking place June 21-23, 2018 in Park City UT.

A 34-year-old man (physically active, mostly resistance training) working in the military (wears a level A hazmat suit) presents for second opinion of a newly diagnosed cardiomyopathy. In February 2014, on routine physical exam, baseline 12-lead ECG demonstrated a complete left bundle branch block. At that time, patient recalled an episode of severe chest pain one month prior that started while exercising and lasted 8-12 hours. In April 2014, complete 2-D echocardiography showed a moderate-severe decrease in LV systolic function with an ejection fraction (EF) of 30% and abnormal septal motion. He was diagnosed with idiopathic nonischemic dilated cardiomyopathy and initiated on carvedilol 25 mg twice daily. Subsequent echocardiography revealed some improvement in EF. He had several cardiac MRIs in May 2014 exhibiting a mildly dilated left ventricle with an EF of 46% without evidence of fibrosis. He also underwent CT coronary angiogram which was normal. EF improved to 51% by March 2015, however, he had not been cleared to return to work.

An oxygen consumption study was performed. 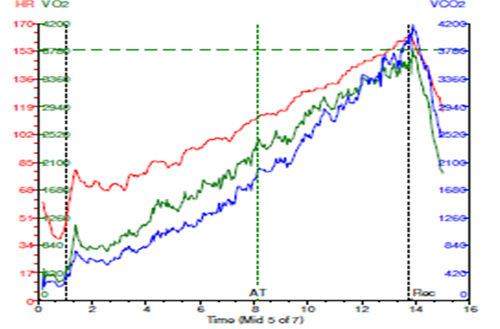 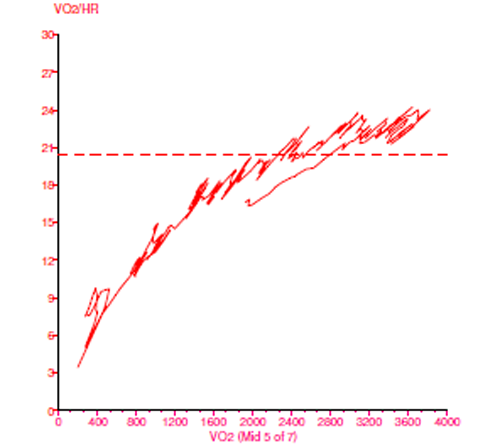 Is there sufficient evidence to demonstrate the patient can safely perform the physical demands of working in a level A hazmat suit?

The correct answer is: B. No, additional testing that simulates the work environment should be performed.

While the cardiopulmonary exercise test in this case example demonstrates a normal cardiopulmonary response to exercise without evidence of cardiac output impairment, it is noteworthy that the study was performed with the patient exercising in shorts and tennis shoes in a cool, climate controlled room. Translating this performance to his ability to work in the hazmat suit is incredibly complex and difficult. This O2 consumption study does not provide sufficient evidence to demonstrate his ability to work in a suit that has a hot, humid internal environment, reduced oxygen supply, and approximately 19 kg of gear and steel-toe boots (research on hot environments with low oxygen is not as substantial as that available on cold environments and low oxygen). The operating point of the Frank-Starling curve has been shown to shift in response to heat and cold stress. Heat stress shifts the operating point closer to the steep rise of the curve, reduces stroke volume, and may lead to orthostatic intolerance in healthy individuals. Therefore, another exercise test wearing the full suit and equipment would provide the necessary evidence for return to work clearance. This was performed and the patient tolerated exercise well as evidenced by 11 minutes of exercise achieving 11 METs with normal exercise hemodynamics. This was in the setting of reaching an internal suit temperature of 104°F. Unfortunately, oxygen consumption was not measured due to the constraints of the suit. The patient was cleared to return to work.

YOU ARE HERE: Home > Education and Meetings > Work Physiology Clearance for Return to Work in a Level A Hazmat Suit