Young Patient with Palpitations on Exertion

A 20-year-old runner was seen in the general cardiology clinic for episodic palpitations and dyspnea on exertion of two-month duration. The episodes of palpitations would last for "a couple of minutes" and were associated with a recent decline in functional capacity for the last month. She denied any exertional chest pain, dizziness, or syncope. Physical examination was grossly normal. Resting 12-lead electrocardiogram is shown in Figure 1. Subsequent to the initial evaluation, an event monitor and echocardiogram were performed. The event monitor (Figure 2) demonstrated an episode of wide complex tachycardia at 185 beat per minute, which correlated with symptoms. Complete 2-D echocardiogram revealed global left ventricular hypokinesis with an ejection fraction of 35-40% and subsequent cardiac magnetic resonance confirmed the presence of mild to moderate left ventricular dilatation with mild global hypokinesis and estimated ejection fraction of 45%. There was no evidence of fibrosis or inflammation. During the initial clinical evaluation, the patient reported a family history of cardiomyopathy in two generations; however, follow-up genetic testing in the patient was unrevealing. No further functional exercise stress testing or stress echocardiogram was performed prior to the referral to electrophysiology for further evaluation of the recorded wide complex QRS tachycardia. After our initial evaluation, the patient proceeded with an electrophysiology study. Decremental atrial pacing resulted in transition from narrow QRS to wide QRS with left bundle branch morphology (Figures 3-5). Programmed ventricular stimulation induced tachycardia with typical left bundle branch block (LBBB) morphology. 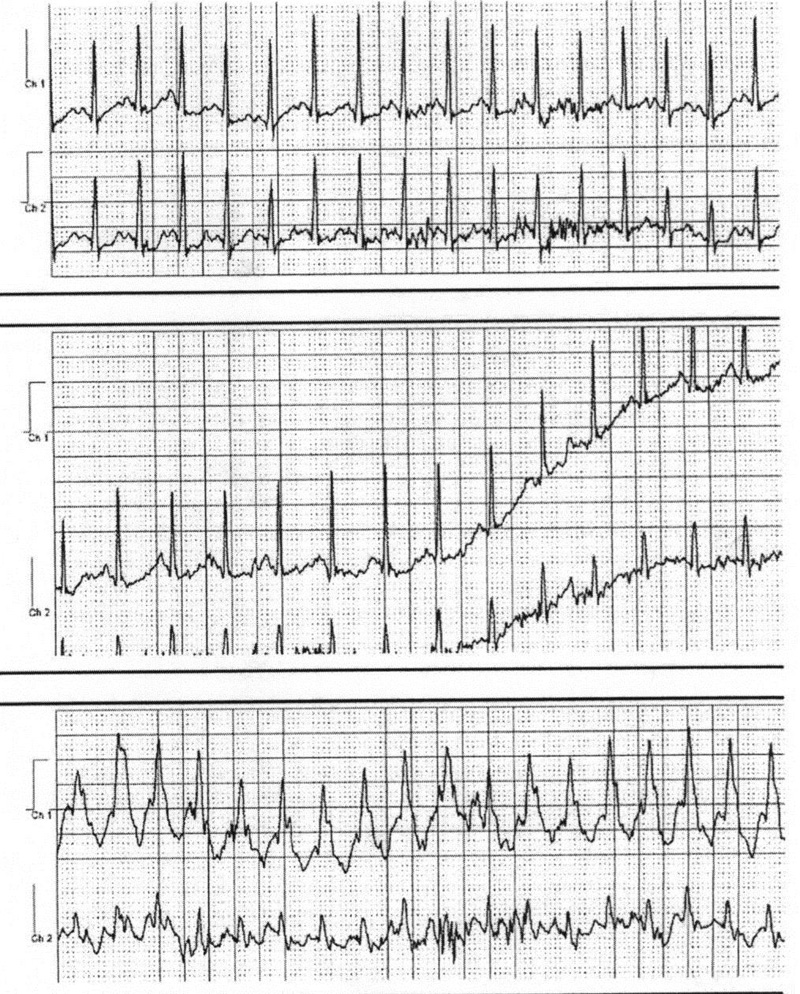 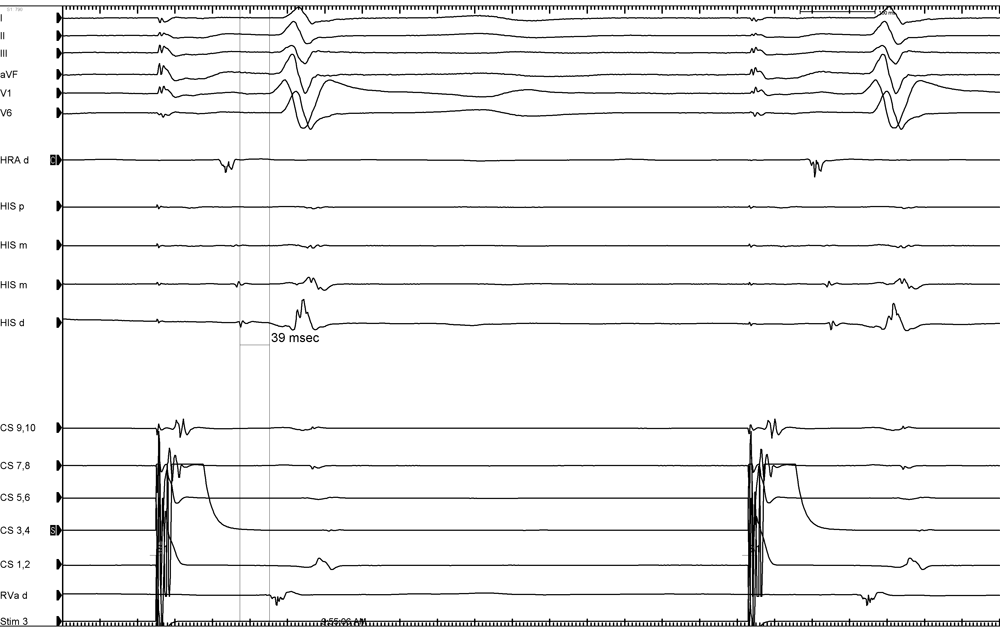 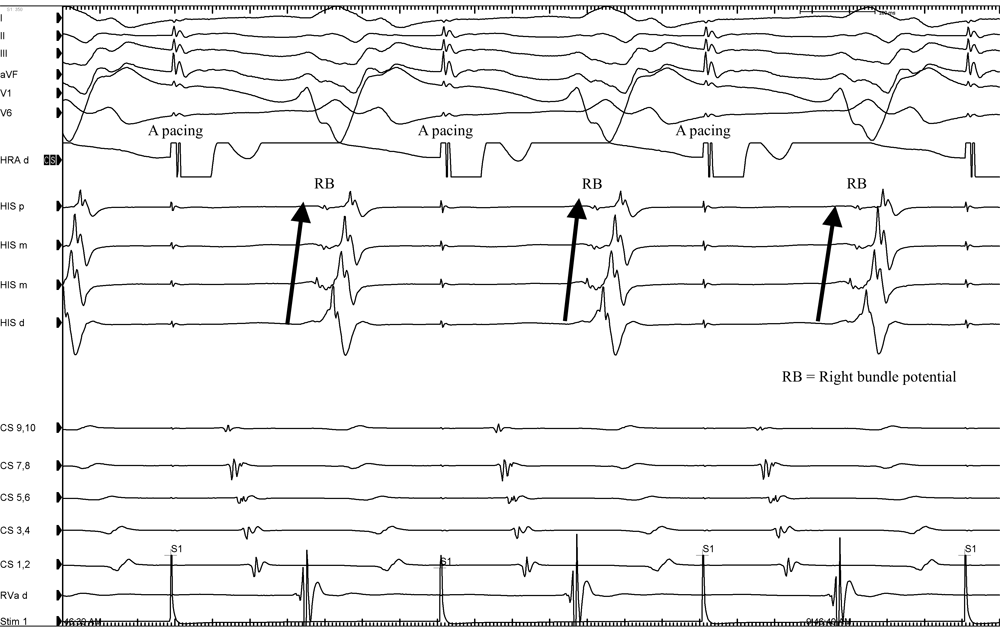 Which of the following is the correct diagnosis?

Figure 3 demonstrates baseline AH and HV intervals. During decremental atrial pacing there was a gradual increase in the AV interval and development of typical LBBB (Figures 4 and 5). This was accompanied by a gradual decrease in the HV interval (finally becoming negative) and change in RBB activation from anterograde to retrograde direction (Figures 5 and 6). This finding is consistent with a decrementally conducting right-sided accessory pathway. Further mapping demonstrated that the pathway inserted near the right ventricular apex. A sharp accessory pathway potential was recorded at the tricuspid annulus at 9 o'clock position (LAO view) (Figure 7). The tachycardia was demonstrated to be an antidromic atrioventricular tachycardia using an atriofasicular pathway in the antegrade direction and the AV node in the retrograde direction. Given her clinically symptomatic tachycardia, the atriofasicular pathway was targeted at the accessory pathway potential site on tricuspid annulus and was successfully ablated using radiofrequency energy.1,2 The patient was later seen in our cardiology office post catheter ablation and underwent repeat 2-D echocardiogram that demonstrated unchanged global left ventricular hypokinesis with an ejection fraction of 40-45%. It was thus our opinion that her presentation was most consistent with an idiopathic dilated cardiomyopathy and she was started on goal directed medical therapy. 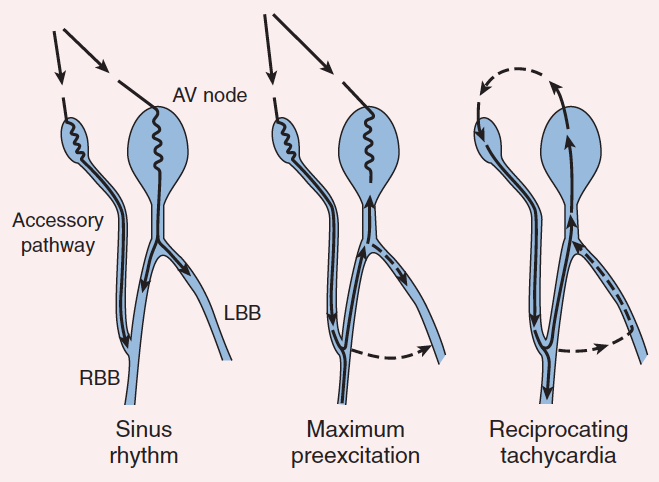 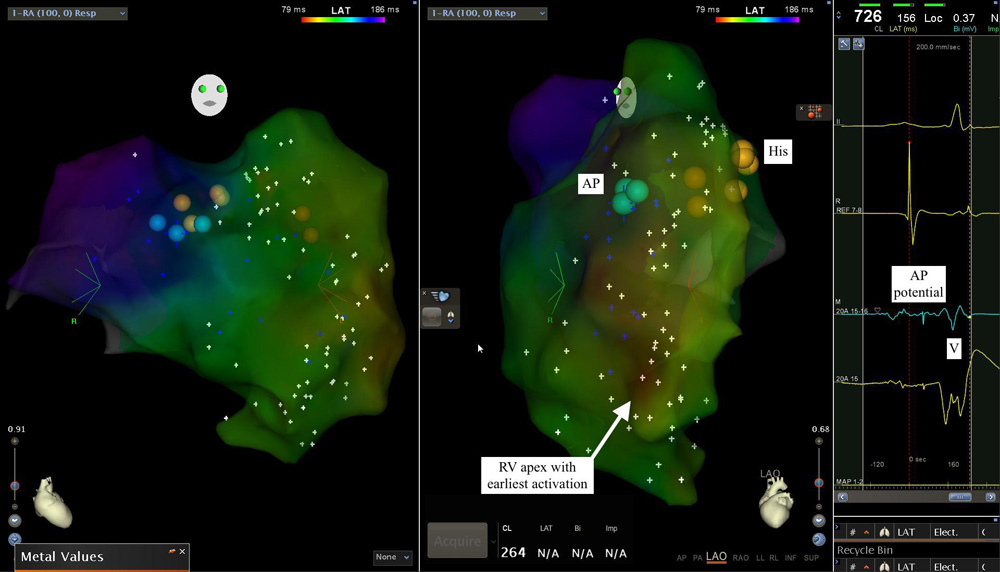 YOU ARE HERE: Home > Education and Meetings > Young Patient with Palpitations on Exertion