A 40-year-old female with a history of hypertension and pulsatile tinnitus developed left-sided neck pain and drooping of her left eyelid following a chiropractic manipulation. An hour following the development of these symptoms, she noticed concomitant weakness of her right upper and lower extremities that persisted for fifteen minutes before spontaneously resolving. However, the persistence of her left-sided neck pain and drooping of the left eyelid prompted her to go to the emergency department (ED) for further evaluation. Her past medical history is significant for hypertension and migraine headaches. She is a non-smoker and takes aspirin and losartan. Her blood pressure at presentation was 130/80 mmHg with a heart rate of 60 beats per minute. Her physical examination showed left sided ptosis and miosis. No other neurological deficits were appreciated. MRA of the head and neck revealed a left distal carotid artery and vertebral artery dissection. She also had irregularities in the right carotid and vertebral arteries but no dissection flap was noted (Figure 1). Treatment with heparin drip was initiated and was subsequently bridged to warfarin on discharge. The patient was referred to our Vascular Clinic, where we identified irregularities again in the right carotid and vertebral arteries in addition to recanalization of the left internal carotid artery on follow up imaging (Figure 2). 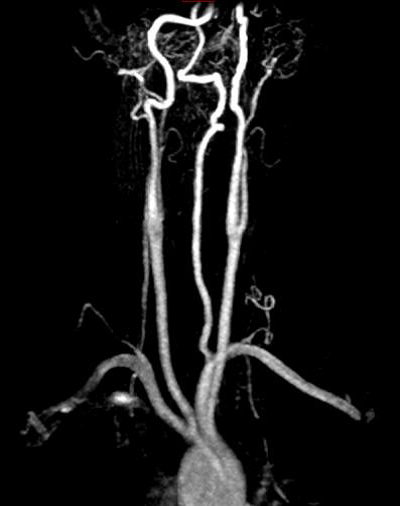 Which of the following conditions is likely the etiology for her pulsatile tinnitus?

The correct answer is: B. Fibromuscular dysplasia.

Tinnitus is a perception of sound in the absence of a physical source of the sound and can be unilateral or bilateral. In most cases, the pathology is in the auditory pathways. In less than 10% of the cases this sound tends to be pulsatile.1 Pulsatile tinnitus is secondary to a pathology in the vascular structures of the head and neck and warrants prompt investigation.

Fibromuscular dysplasia (FMD) is a noninflammatory disorder of the medium sized arteries resulting in stenosis, aneurysm, occlusion, and dissection of the arteries. The disease occurs predominantly in the middle-aged women; however, it has been reported in younger or older people as well.2 Patients with FMD can have many non-specific symptoms such as headaches, dizziness, pulsatile tinnitus or hypertension causing a significant delay in diagnosis. Data from the FMD registry shows that close to 42% of the patients with FMD have an aneurysm and/or arterial dissection.3

Registry data also suggests that up to 32% of patients with FMD report migraine type headaches and up to 27% have pulsatile tinnitus as their presenting symptoms. Pulsatile tinnitus in a middle-aged female patient should warrant a prompt investigation for cerebrovascular FMD as well as other potential vascular etiologies.2 Our patient had both these symptoms for years prior to her presentation at the ED with dissection. We often recommend avoiding chiropractic manipulations to patients with FMD and it is likely that early diagnosis could have led to her avoiding chiropractic manipulation and thereby preventing a dissection and subsequent cerebrovascular event in this patient.

FMD is almost always diagnosed radiographically and is classified by its angiographic appearance as focal or multifocal, with multifocal being the predominant type. MRA of the head and neck in the present patient clearly demonstrated irregular beaded appearance of right middle and distal internal carotid and vertebral arteries confirming the diagnosis of FMD.4 It is likely the dissected left internal carotid and vertebral arteries also had fibromuscular dysplasia; however this could not be confirmed on imaging as the dissection had distorted the appearance of the arteries.

Pulsatile tinnitus can also be appreciated in patients with atherosclerotic carotid artery disease, however it is not as commonly noted when compared to those with fibromuscular dysplasia. The turbulent blood flow in the stenotic segments caused by fibromuscular dysplasia or atherosclerosis can likely cause pulsatile tinnitus on the ipsilateral side. Also, the severely stenotic segment can result in an accelerated blood flow in the patent vessel causing the patient to experience pulsatile tinnitus on the side contralateral to the stenosis.1

Pulsatile tinnitus and headaches are common symptoms in cranial dural arteriovenous fistula (CDAVF) and other malformations. The clinician can appreciate pulsatile tinnitus in cases of CDAVF as a loud bruit in the retro-auricular area.5 These malformations are direct shunts between the dural arteries and the dural or cortical veins. The transverse and sigmoid dural sinuses are usually involved when patients present with pulsatile tinnitus.6 Considering the location of these lesions in the dura mater- CT scans, MRI and MRA may detect these subtle malformations. Therefore, when the suspicion is high, the diagnostic gold standard is digital subtraction angiography.1 Treatment is usually with endovascular embolization, stereotactic radiosurgery or microvascular intervention. A prompt referral to the neurosurgical or neurointerventional services is often warranted.

Idiopathic intracranial hypertension syndrome (IIHS) is a condition of raised intracranial pressure without any apparent underlying pathology. 65% of patients with IIHS present with pulsatile tinnitus.1 Pulsatile tinnitus in IIHS is believed to be secondary to an increased magnitude of the systolic pulsations of the arteries comprising the circle of Willis. These increased pulsations are transmitted to the transverse and sigmoid dural sinuses. The resulting pressure changes convert the laminar blood flow in the sinuses to a turbulent flow causing pulsatile tinnitus in these patients. This condition predominantly affects obese women of childbearing age and is seldom associated with any focal neurological dysfunction. A normal cerebrospinal fluid (CSF) analysis with elevated CSF pressure (greater than 200 mm water) is necessary to make the diagnosis. Patients with this condition often have posture dependent headaches.1

In addition, there are several other conditions such as rare vascular malformations of jugular bulb, vascular anomalies of the middle ear, tortuous course of the carotid artery, glomus tumor of the jugular foramen that can cause pulsatile tinnitus. Pulsatile tinnitus has also been reported in hyperdynamic states such as anemia, thyrotoxicosis, and pregnancy.

In summary, pulsatile tinnitus is a symptom that potentially has multiple vascular etiologies and warrants a detailed history, evaluation and an appropriate radiological study. Often a multidisciplinary teamwork is needed to arrive at a prompt diagnosis.

YOU ARE HERE: Home > Education and Meetings > Young Woman With Transient Ischemic Attack and Pulsatile Tinnitus