How Will the New Supersensitive Troponins Affect Clinical Cardiology? 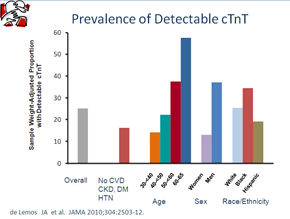 Two studies published back-to-back in the New England Journal of Medicine in 2009 compared sensitive versus standard assays of troponin T and I for detection of MI.1,2 Both studies showed improved accuracy for the newer assays, as reflected in the area under the receiver operating characteristic curve. The enhanced performance was, as expected, due to improved sensitivity that was most notable in the first few hours after symptom onset, with differences narrowing by 6 hours. The improvement in sensitivity was counterbalanced in part by lower specificity for the diagnosis of MI.

Several points merit consideration when interpreting these results. First, MI was only diagnosed with the highly sensitive assays when troponin values were ≥99th percentile cut point, and a rise or fall was seen on serial measurement. Values that were detectable at levels below the 99th percentile cut point were common, but were not considered indicative of MI. Additionally, values that were elevated, but “flat” were not classified as MI. 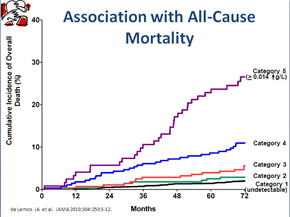 Second, the prevalence of MI was several-fold higher in the populations studied (17% and 23%) than is typically seen among patients presenting with chest pain to U.S. emergency departments or chest pain units. Application of the more sensitive, but less specific troponin assays to a population with a lower pretest probability of MI would result in more false-positive diagnoses with little change in the negative predictive value.

Using a precommercial version of the highly sensitive cTnT assay, the prognostic value of very low levels of cTnT was evaluated in ambulatory patients with chronic heart failure (HF) enrolled in the Val -HeFT trial. cTnT was detectable in 10% of the population with the standard cTnT assay versus 92% with the highly sensitive TnT assay. Risk for death and HF progression increased seven- to eight-fold across increasing deciles of cTnT, and remained strongly associated with these outcomes after adjusting for standard risk predictors and B-type natriuretic peptide (BNP) levels.

Moreover, a follow-up measurement performed 4 months later added prognostic information to the baseline measurement, suggesting that serial measurements of troponin levels with a highly sensitive assay may help to assess disease progression and response to therapy among patients with chronic HF.

We measured cTnT with the highly sensitive cTnT assay in 3,593 patients with chronic coronary artery disease and normal left ventricular (LV) function enrolled in the PEACE trial.3 cTnT was detectable in 98% of patients, and higher levels (but below the limit of detection of standard assays) correlated strongly with cardiovascular death and with subsequent HF, a finding that persisted in analyses adjusting for other risk predictors. Interestingly, cTnT measured by the highly sensitive assay did not correlate with subsequent risk of MI in this population of patients with stable coronary artery disease. 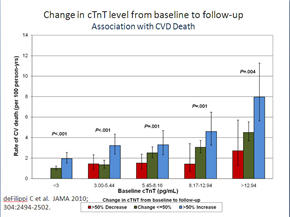 The findings of these two studies suggest the following about using a highly sensitive assay: 1) cTnT is detectable in almost all patients with chronic coronary artery disease or HF, even in the absence of symptoms; 2) levels of cTnT below the threshold of detection of standard assays can predict risk of death or HF in patients with chronic cardiovascular disease; and 3) in the ambulatory setting, higher troponin levels reflect HF risk more than MI risk.

Screening and Risk Stratification in the General Population

Using standard assays, troponin is rarely detectable among individuals in the general population. We previously measured cTnT with a standard assay in ~3,500 subjects from the Dallas Heart Study (DHS), which is a representative population-based cohort with a high proportion of women and African American subjects.4 Using the standard assay, cTnT was detected in only 0.7% of adults 30-65 years of age. However, when detectable, cTnT was associated with structural heart disease (LV hypertrophy or dysfunction, or clinical evidence of HF) or major risk factors such as diabetes and chronic kidney disease.4 These findings suggested a specific adverse cardiovascular “phenotype” associated with detectable cTnT in the population, and raised the possibility that if more sensitive assays were available, troponins may represent intriguing tools for screening of asymptomatic adults for structural heart disease.

Recently, two studies were published that applied the highly sensitive cTnT assay to population-based cohorts to assess screening performance and risk assessment. In the DHS trial, cTnT was detectable with the highly sensitive cTnT assay in 25% of adults, and was ≥99th percentile value (the proposed MI detection limit) in 2% of individuals. Levels were higher in men than women and in African Americans compared with white participants, and increased markedly with age (Figure 1).5 In the Cardiovascular Health Study (CHS), which studied 4,221 elderly adults (≥65 years old) without a history of HF, cTnT was detectable in 66% of participants.6 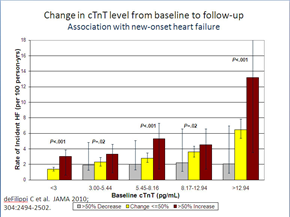 In the DHS trial, cTnT correlated independently with parameters reflecting structural heart disease, including magnetic resonance imaging-determined LV hypertrophy and LV dysfunction, as well as with renal function. In contrast, coronary calcium, and prior MI or angina, were not predictive of cTnT elevation. These findings again suggest that cTnT is a measure of structural heart disease rather than ischemic risk in stable outpatients. Across categories of increasing cTnT, mortality increased >15-fold (Figure 2), an association that remained significant after adjusting for standard risk factors, renal function, CRP, and NT-proBNP.5

In the CHS trial, nonfatal outcomes were also available, and higher cTnT predicted increased HF risk in addition to increased risk for mortality. Importantly, a second cTnT measurement was available in ~70% of participants 2-3 years after the initial measurement. In addition to the baseline level of cTnT, changes in cTnT were independently associated with subsequent risk of death and HF (Figures 3 and 4).6 This finding may be particularly significant, as it suggests that risk identified by higher troponin levels may be modifiable. Future studies will need to focus on whether lifestyle factors or drug therapies that lower cTnT can possibly mitigate associated risk.

Implications of Recent Findings With the Highly Sensitive Assays

YOU ARE HERE: Home > Latest in Cardiology > How Will the New Supersensitive Troponins Affect Clinical Cardiology?