Which Marker Should We Use to Assess Acute Renal Injury 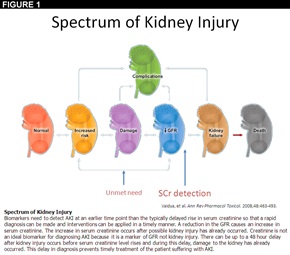 Acute kidney injury (AKI) is a common medical problem, especially in the in-patient setting, and occurs typically in a patient with chronic disease or risk factors for kidney injury (Figure 1). The mortality rate for hospitalized patients who develop AKI is approximately five times higher than for those without AKI.1 Currently, AKI is diagnosed by measuring the increase in serum creatinine, which is considered a delayed marker of deterioration in the kidney function rather than a true reflection of the actual renal cell injury. The estimation of AKI by measuring serum creatinine is limited by the dependency of creatinine levels in the blood on many factors, including age, sex, dietary protein intake, muscle mass, and medications. Furthermore, there is no standardization of creatinine measurement assays across laboratories. Hence, there has been a clear need for more reliable markers of renal function that serve as cost-effective early detectors of acute kidney injury and provide an accurate reflection of renal function, which would expedite the management and improve the prognosis of AKI, or even prevent it.

Research efforts in the last few years have led to the identification of several promising biomarkers of AKI that can be measured in the blood or the urine. Characteristics of an ideal biomarker for AKI include: rapid and reliable increase in response to injury, high sensitivity and specificity for AKI, correlation of measured levels with injury severity and overall prognosis, inexpensive and easy to measure in urine or serum, and applicability across different populations. 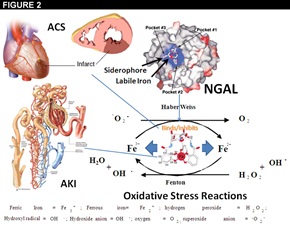 Neutrophil gelatinase-associated lipocalin (NGAL) has been extensively studied as a potential biomarker for AKI. NGAL, also known as lipocalin-2 or siderocalin, was first discovered as a 25-Kda glycoprotein covalently bound to gelatinase in granules of human neutrophils.2 NGAL is a biologic response to the release of labile iron from injured tissues in the setting of ischemia, sepsis, and toxic insults (Figure 2). NGAL is synthesized and secreted by tubular epithelial cells of the proximal and distal segment, and is freely filtered by the glomerulus. Urinary NGAL showed very promising results in early studies, with an area under the receiver operating characteristic curve (AUC-ROC) of 0.998 at 2 hours in pediatric patients undergoing cardiopulmonary bypass who had normal renal function at baseline.3

Serum NGAL was inferior to urinary NGAL in the same study. Inconsistent and less impressive results were obtained from a series of studies that were performed using urinary NGAL in the setting of adult cardiac surgery, percutaneous coronary intervention and critically ill children, with AUC-ROC values ranging from 0.67 to 0.80.4-6 Clinical assays for NGAL measurement are currently undergoing extensive clinical testing, but the above-mentioned variable results have mandated a better clarification and validation of diagnostic performance of NGAL before full implementation in clinical practice. One caveat with NGAL is that constitutive expression in chronic disease states markedly increases the baseline levels; therefore, a relative instead of an absolute value may be needed in the setting of acute on chronic renal injury. While NGAL is clearly the leading protein in clinical development as an AKI marker, there are other markers to consider (Figure 3).

Interleukin-18 (IL-18) is synthesized as an inactive 23 KDa precursor by many tissues including the proximal tubular epithelial cells. Ischemic injury and inflammatory states trigger the intracellular cleavage of the immature IL-18 into the active form, which is then detected in the urine as a marker of injury. IL-18 has been extensively studied in different clinical settings by Parikh et al. In an initial study, the AUC-ROC (comparison of IL-18 levels in acute tubular necrosis [ATN], healthy controls, prerenal azotemia, urinary tract infection, and transplant patients) was 0.95, with the highest levels observed in ATN.7 IL-18 was also studied in cardiac surgery, acute respiratory distress syndrome, and in patients with and without chronic kidney disease, with variable but promising results.8,9 Higher levels of IL-18 appear to correlate with ischemic AKI compared with other etiologies for AKI. It also offers prognostic information, and reflects the severity of illness and mortality at the time of AKI diagnosis. Similar to NGAL, IL-18 has not met the criteria to be used as a marker for AKI based on studies performed to date, although it is commercially available for that purpose. Further studies are required for validation of its use.

Cystatin C, which also has been extensively studied as a potential biomarker indicating a reduction in renal filtration as a result of AKI, is a 13 KDa cysteine protease that is produced by all nucleated cells.10 In one study by Nejat et al, cystatin C was found to precede serum creatinine in detecting AKI in the ICU setting by 1.5±0.6 days.11 Coca et al, in their review of AKI biomarkers, found that serum cystatin C performed well with an ROC-AUC of 0.88-0.97.12 Although cystatin C has been shown to be immune to variations in serum levels compared with serum creatinine, serum levels can be affected by certain conditions such as thyroid dysfunction and corticosteroid use. Another criticism of cystatin C, as with serum creatinine, is that cystatin C is still a functional marker of glomerular filtration rate (GFR) rather than a real tissue injury marker. On the other hand, some studies have shown the ability of cystatin C to predict the need of renal replacement therapy in AKI patients, but other studies have concluded that serum cystatin C has no role in predicting the clinical outcome. Serum cystatin C assays are commercially available, but further evaluations and more comprehensive studies are necessary to validate the use of cystatin C as a marker of AKI.

KIM-1, or kidney injury molecule-1, is type I transmembrane glycoprotein not usually detected in normal kidneys, but is highly upregulated after ischemia or toxic injury. It is considered a marker of proximal tubular epithelial cell injury and reconstruction. Sfter it is released from the injured epithelial cells, it is usually detected in the urine using commercially available enzyme-linked immunosorbent assays. Detection of KIM-1 in the urine was linked to ATN in multiple studies, and has also been correlated with AKI of different etiologies. One study reported an ROC-AUC of 0.90 using urinary KIM-1 for detection of AKI.13 Very promising results were also obtained in studies of cardiac surgery patients, with reasonably high specificity and sensitivity. However, other studies found KIM-1 to have mixed results for predicting AKI, or clinical outcomes such as renal replacement therapy or death. The use of KIM-1 in early detection of AKI is limited by the 12-24 hours delay after onset of AKI before increased levels are seen. Its strength as a biomarker stems from the fact that it was proved to be a more specific marker of certain etiologies of AKI, such as ATN. Similar to the other biomarkers discussed above, KIM-1 requires further evaluation and validation before it is approved for use in clinical practice as an early biomarker of AKI.

Other biomarkers that have been also studied as possible early detectors of AKI include tubular enzymes (e.g. N-acetyl-b-(D)-glucosaminidase [NAG], brush border enzymes), which are released from the brush border of the proximal tubular epithelial cells and indicate tubular dysfunction. As reported by Herget-Rosenthal et al, NAG had the best predictive value of the tubular enzymes studied, with an AUC-ROC curve of 0.81.14 The use of tubular enzymes as markers of AKI has not yet been adopted in clinical use due to mixed results.

Urinary liver fatty acid-binding protein (L-FABP) has also been studied as a possible early biomarker for AKI. In a study by Ferguson et al, urinary L-FABP was significantly increased in 92 patients with established AKI compared to 62 patients without clinical evidence of AKI, and had an ROC-AUC of 0.93.15 L-FABP has also been validated in a number of cohort studies in different clinical settings with good results, indicating that L-FABP may have a potential role in the clinical diagnostic evaluation of AKI.

Recent research studies have provided us with powerful panel of biomarkers for early detection and prognostication of AKI. Each of these biomarkers has its strengths and limitations in defining the onset and prognosis of AKI. Serum cystatin C, IL-18 and KIM-1 were the best in determining the differential diagnosis of established AKI. Urinary NGAL and IL-18 did very well in early identification of injury. A specific subset of tubular enzymes, KIM-1, and IL-18 predicted mortality risk better than the other biomarkers. Based on the above, it seems like each of the biomarkers requires further evaluation with powered multicenter clinical trials before being adopted to clinical practice. Combining these biomarkers into one AKI panel seems an attractive approach for better and earlier detection of AKI, with the potential of improving patient care and outcomes.

YOU ARE HERE: Home > Latest in Cardiology > Which Marker Should We Use to Assess Acute Renal Injury