Which Marker is the Best for Assessing Acute Heart Failure or Does it Matter? 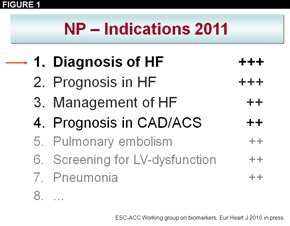 5) Other biomarkers including sensitive cardiac troponins, midregional- proAdrenomedulin, Copeptin, ST2, galactin-3, pro-endothelin, and growth-differentiation factor 15 seem to provide prognostic information in addition to natriuretic peptides. It is currently unknown how the additional prognostic information can be used clinically to improve patient outcome. 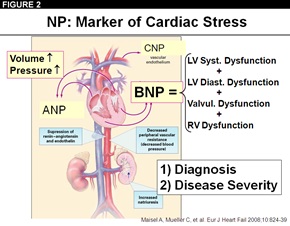 Natriuretic peptides (NPs), as quantitative markers of hemodynamic cardiac stress and heart failure (HF), owe their enormous clinical importance to the fact that HF is a major public health problem, the uncertainty in the clinical diagnosis and management of HF, and their excellent diagnostic and prognostic utility.(1-6) The rapid and accurate differentiation of HF from other causes of dyspnea remains a clinical challenge. After evaluating a patient’s symptoms, conducting a physical examination, and performing electrocardiography and chest radiography, the clinician is often left with considerable diagnostic uncertainty, which results in misdiagnosis and delays the initiation of appropriate therapy.(1-6)

Most clinical data on NPs have been obtained with assays measuring either B-type natriuretic peptide (BNP) or NT-proBNP. Overall, these assays seem to have comparable diagnostic and prognostic utility.(1-6) Recent data suggested that other members of the NP family including midregional proANP (MR-proANP) may have comparable diagnostic and prognostic accuracy.(5,6) In the BACH study, which included 1641 patients, the diagnostic accuracy as quantified by the areas under the receiver operating characteristic (ROC) curve were 0.91 for BNP, 0.90 for NT-proBNP, and 0.90 for MR-proANP.(6)

NPs can be seen as quantitative markers of cardiac stress and heart failure (HF) summarizing the extent of systolic and diastolic left ventricular dysfunction, valvular dysfunction, and right ventricular dysfunction. In general, levels of BNP and NT-proBNP are directly related to the severity of HF symptoms and to the severity of the cardiac abnormality. BNP is a 32-amino acid polypeptide that is co-secreted with the inactive NT-proBNP from the left and the right cardiac ventricle in response to ventricular volume expansion and pressure overload.(7,8) Recent data suggest that left ventricular end diastolic wall stress and wall stiffness may be the predominate triggers of BNP release.(7,8)

Two important principles underlie the clinical use of NPs. First, a NP level is NOT a stand-alone test. It is always of greatest value when it complements the physician’s clinical skills along with other available diagnostic tools. Second, NP levels should be interpreted and used as continuous variables to make full use of the biological information provided by the measurement (like e.g. blood pressure, heart rate, or estimated glomerular filtration rate). 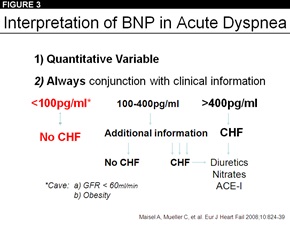 Numerous observational studies including patients presenting with acute dyspnea have validated NPs against a gold standard diagnosis of HF and shown convincingly that NPs have a very high diagnostic accuracy.(1-6) The higher the NP level the higher the probability that dyspnea is caused by HF. The Breathing NOT Properly study included more than 1500 patients and found that adding BNP to clinical judgement enhanced diagnostic accuracy from 74% to 81%. The areas under the ROC curve were 0.86, 0.90, and 0.93 for clinical judgement, for BNP, and for the 2 in combination, respectively (P<0.0001 for all pair-wise comparisons).(3,4) Similar findings were obtained for NT-proBNP and MR-proANP.(1-6,9,10) Moreover, a randomised comparison of a strategy of making NT-proBNP results available to primary care physicians, in addition to patient history and clinical information, reported a substantial increase in diagnostic accuracy for patients with new symptoms that might be caused by HF mainly by “ruling out” HF.(11)

NPs predict prognosis and help to risk stratify patients with dyspnea irrespective of the cause of dyspnea (HF or non-cardiac).(12-14) The NP level quantifies HF severity and accurately predicts the risk of death, both in-hospital and long-term. In contrast, NPs have a very low accuracy in the prediction of heart failure rehospitalization.

To make best use of the diagnostic and prognostic information of NP levels, the clinician needs to understand that NPs are quantitative markers of HF. The higher the NP level, the higher the likelihood that the dyspnea in the individual patient is caused by HF. It has become common to use two cut-off values: A lower one with a high negative predictive value to reliably exclude HF as the cause of acute dyspnea, and a second higher one with a high positive predictive value to “rule in” HF as the cause of dyspnea. For BNP, 100 pg/ml and 400 pg/ml should be used. These cut-off values apply irrespective of age and sex.(2) However, two clinical conditions require adjustment: kidney disease and obesity. In patients with kidney disease and an estimated glomerular filtration rate of less than 60 ml/min, 200-225 pg/ml rather than 100 pg/ml is the most appropriate cut-off value to rule out HF.(2) In contrast, the presence of obesity requires the use of lower cut-off values. In patients with severe obesity (body mass index above 35), a BNP cut-off value of 60 pg/ml to rule out and 200 pg/ml to rule in HF as the cause of acute dyspnea is recommended.(2)

The International Collaborative for NT-proBNP Study defined the most appropriate cut-off values for NT-proBNP.(9) A level of 300 pg/ml should be used to “rule out” HF. Depending on age (<50; 50-75;>75years), 450 pg/ml, 900 pg/ml, or 1800 pg/ml should be used to “rule in” HF. As renal function is closely related to age, no further adjustment for renal function is necessary. Obesity is also associated with lower NT-proBNP levels.(2) It is a matter of debate whether NT-proBNP levels should be adjusted for obesity.

The added value of NP in the management of patients with dyspnea was examined in five randomized controlled trials.(10,15-16) Four out of these five trials showed a significant improvement in patient management with the additional measurement of a NP. The BNP for Acute Shortness of Breath Evaluation (BASEL) study randomized consecutive patients presenting with dyspnea to the ED to either BNP-guided management or standard management without the use of BNP.(15) The use of BNP resulted in a reduction in the time from presentation at the ED to the initiation of the appropriate therapy according to the final discharge diagnosis, a reduction in hospital admission rate, a reduction in the need for intensive care, and a reduction of the time to discharge. Based on these data, the measurement NPs is recommended in all patients presenting with suspected acute HF.

Cardiogenic shock is one specific form of acute heart failure that is necessary to highlight as an important exception for NP measurement, as NPs are not helpful in the differential diagnosis of cardiogenic shock versus other causes of shock, nor do they predict prognosis.(19)

A second NP measurement should be obtained prior to discharge in patients with confirmed acute HF to assess the adequacy of in-hospital treatment. The lower the discharge NP level, the lower the risk of subsequent death. Serial measurements of NP during the hospitalization of patients admitted for acute decompensated HF increase the prognostic accuracy of the measurement at presentation.(20,21)

Other biomarkers including sensitive cardiac troponins, MR-proAdrenomedulin, Copeptin, ST2, pro-endothelin, and growth-differentiation factor 15 seem to provide prognostic information in addition to natriuretic peptides.(6,22-25) It is currently unknown how the additional prognostic information can be used clinically to improve patient outcome.

Multiple important clinical questions can not be adequately addressed by currently available biomarkers including the differentiation of systolic from diastolic acute HF, the detection of isolated right ventricular dysfunction, the detection of ischemic HF, as well as the early detection of those acute HF patients at highest risk for acute kidney injury.(22) In addition, we wish to highlight that NPs and many of the novel biomarkers are powerful predictors of death, but none of them adequately predicts HF readmission.(7)

Ongoing studies with established as well as novel biomarkers are trying to reveal distinct disease subsets within the AHF spectrum with differential response to available treatments.

YOU ARE HERE: Home > Latest in Cardiology > Which Marker is the Best for Assessing Acute Heart Failure or Does it Matter?