Editor's Note: Dr. Deepak Bhatt was the International Co-Principal Investigator of the SAVOR-TIMI 53 Trial. He presented the main results at ESC Congress 2013.

At the European Society of Cardiology 2013 meeting in Amsterdam, two late-breaking clinical trials were presented and simultaneously published in the New England Journal of Medicine. These two studies were the first in a series of large cardiovascular outcome trials of novel drugs used to treat diabetes mellitus. 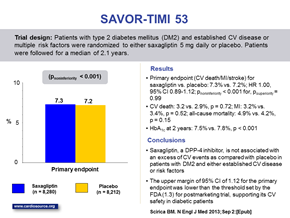 The SAVOR-TIMI 53 trial (Slide 1) was the larger of the two studies. A total of 16,492 patients with type 2 diabetes mellitus and either established cardiovascular disease or multiple cardiovascular risk factors were randomized to receive either the dipeptidyl peptidase-4 (DPP-4) inhibitor saxagliptin or placebo. The overall hazard ratio for cardiovascular death, myocardial infarction, or ischemic stroke was 1.00, with a 95% confidence interval of 0.89-1.12; the p value for non-inferiority was <0.001 and for superiority was 0.99. Similarly, the hazard ratio for a more comprehensive secondary cardiovascular endpoint was 1.02. Unexpectedly, there was an excess in one component of the secondary endpoint, hospitalization for heart failure (Slide 2). While statistically significant, in absolute terms, the excess in hospitalization for heart failure was only 0.7% over two years, and there did not appear to be any significant excess in mortality associated with this finding. Analyses are ongoing to understand better this observation.

The EXAMINE trial (Slide 3) randomized 5,380 patients with type 2 diabetes mellitus and a recent acute coronary syndrome to the DPP-4 inhibitor alogliptin or to placebo. The overall hazard ratio for the primary endpoint of cardiovascular death, myocardial infarction, or stroke for alogliptin versus placebo was 0.96, with an upper boundary of the one-sided repeated confidence interval of 1.16; the p value for non-inferiority was <0.001 and the p value for superiority was 0.32.

Both trials were initially designed in response to the United States Food and Drug Administration (FDA) requirement that new diabetes drugs establish cardiovascular safety in order to remain on the market. Both trials met the criteria laid out by the FDA, which was that the upper bound of the 95% confidence interval for the hazard ratio for ischemic events be less than 1.3. 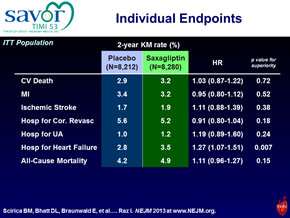 The results of both trials were largely concordant, especially with respect to the primary cardiovascular safety endpoint each trial was designed and powered to test. Therefore, these trials provide reasonable confidence that DPP-4 inhibitors as a class are safe, both from a cardiovascular perspective, and also in general. Nevertheless, it will be important for the ongoing trials of other DPP-4 inhibitors, as well as novel diabetes drugs such as the SGLT-2 inhibitors, to continue their planned mega-trials. It is only with trials of such magnitude that rare side effects may be detected and the full cardiovascular and general safety of diabetes drugs can be established. 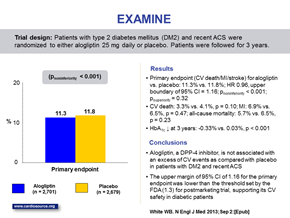 Pancreatitis had been a concern with DPP-4 inhibitors based on observational data. Neither randomized, blinded trial found a significant difference in pancreatitis. Additionally, neither trial found an excess in pancreatic cancer, which had also been raised by some as a concern based on preclinical data. Once again, the value of randomized clinical trials over observational or animal data is demonstrated.

The lack of any hint of benefit on cardiovascular outcomes in either trial is also noteworthy. Does that mean that reduction in hemoglobin A1c does not reduce macrovascular events? Neither trial was optimally designed to test that hypothesis. It would be necessary to conduct a much larger, longer term study. Furthermore, there would need to be a greater contrast between treatment arms than is likely to be attained in trials in which add-on diabetes therapy is allowed, which will probably be greater in the control arm than in the active arm. In SAVOR-TIMI 53, the hemoglobin A1c at two years was 7.5% in the saxagliptin arm and 7.8% in the control arm, p<0.001. In EXAMINE, there was a similar 0.36% reduction in the hemoglobin A1c for alogliptin versus control, p<0.001. In the absence of some pleotropic effect, those differences in hemoglobin A1c would not be expected to reduce macrovascular events over the durations of follow up of these two trials.

Thus, overall these two trials provide reassurance that DPP-4 inhibitors are a reasonably safe therapy to use for type 2 diabetes mellitus. They clearly do not raise myocardial infarction risk, which has been a concern with other classes of diabetes drugs. Cancer rates, liver damage, and fracture risk — which have been associated with other diabetes drugs — were not noted to be significantly elevated in these two trials of DPP-4 inhibitors. The data (and cost) do not support their use as first-line agents, but in patients who need add-on therapy, this class of medications now has a large evidence base upon which physicians can make informed decisions for their patients about which agents to use for attaining glycemic control while weighing the cardiovascular and general safety of diabetes drugs. Both drugs seem to be useful in lowering hemoglobin A1c to target, though neither trial tested nor supports aggressive lowering of hemoglobin A1c in older patients with longstanding diabetes and established cardiovascular disease, consistent with current recommendations for more liberal targets (e.g., <8%) in this population. Furthermore, other approaches will be necessary to reduce actual cardiovascular risk in diabetic patients.

YOU ARE HERE: Home > Latest in Cardiology > New Diabetes Drugs Neither Increase nor Decrease CV Risk in Diabetic Patients