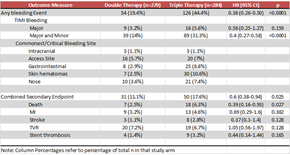 With increasing life-expectancy, the prevalence of coronary artery disease (CAD) and atrial fibrillation (AF) is on the rise.1 Patients with CAD and AF, or other indications for anticoagulation, who undergo percutaneous coronary intervention (PCI), require a guideline mandated period of therapy with dual antiplatelet therapy along with anticoagulants (triple therapy).2 Such patients pose an especially unique challenge in terms of the optimal antithrombotic regimen for clinicians. The sum of the risk in terms of bleeding is considerably larger than its parts when using 'triple therapy'. It is also unclear whether triple therapy provides increased protection against recurrent myocardial infarctions (MI) and strokes.3,4 In the 'What is the Optimal antiplatelet and anticoagulant therapy in patients with oral anticoagulation and coronary Stenting (WOEST) trial', the investigators courageously attempt to swim against the tide of adding therapies upon existing regimens to study if eliminating aspirin from the triple regimen would provide a safer yet efficacious alternative.5

The WOEST investigators performed an open-label, multicenter, randomized trial at 15 centers in Belgium and Netherlands. Adult patients who were receiving oral anticoagulants for an established indication and were undergoing PCI for an obstructive coronary lesion (≥ 75% stenosis angiographically or FFR<0.8) were included. Patients who were unstable (e.g., shock) or those at elevated risk for bleeding (e.g., Prior intracranial hemorrhage) were excluded. All patients were pretreated with a maintenance dose of 75 mg clopidogrel daily for at least five days, a loading dose of 300 mg at least 24 hours before PCI, or a loading dose of 600 mg at least four hours before PCI. Randomization was performed before the PCI or up to four hours after. Patients were randomized 1:1 to either receive 75 mg clopidogrel daily alone or 80–100 mg aspirin daily in addition to the daily clopidogrel. The minimum duration of study drug recommended was one month for patients receiving a bare metal stent (BMS) and one year for those receiving a drug eluting stent (DES) or post acute coronary syndrome. Patients were followed for one year for the primary endpoint of 'any bleeding episode' and a secondary composite endpoint of death, myocardial infarction, stroke, target-vessel revascularization, and stent thrombosis.

The authors deserve the admiration of the scientific community for attempting to address this common but difficult question. If one looks at the trial with a clinician's hat, the fact that we now have clinical trial evidence that dual therapy causes lesser bleeding than triple therapy, without an increase in thrombotic events is reassuring at first blush. It is however critical to evaluate the evidence from a trialist's standpoint to truly understand the validity and depth of the data. The bleeding rates in WOEST were unexpectedly fourfold higher than those estimated in planning the study. While, there is a difference in the 'primary' bleeding outcome, this is driven largely by non-major skin and gastrointestinal bleeding. The trial was underpowered for the secondary 'efficacy' outcome and is especially unable to evaluate the pertinent issue of stent thrombosis given limited follow up. Even so, it is quite perplexing that the rate of the secondary composite efficacy outcome was higher with triple therapy. The high (65%) usage of drug eluting stents and low employment of radial access (26%) probably contributed asymmetrically to higher bleeding with triple therapy. While aspirin, clopidogrel and Coumadin remain the most commonly prescribed antithrombotic drugs worldwide, the results of WOEST cannot be extrapolated to the large cadre of novel antiplatelet and anticoagulant drugs making their way into our armamentarium. In summary, this open-label, two country trial blazes the way for innovative combinations of antithrombotic drugs, is by no means definitive, and like every good study, leaves us with more questions than answers.

YOU ARE HERE: Home > Latest in Cardiology > Use of Clopidogrel With or Without Aspirin in Patients Taking Oral Anticoagulant Therapy and Undergoing PCI