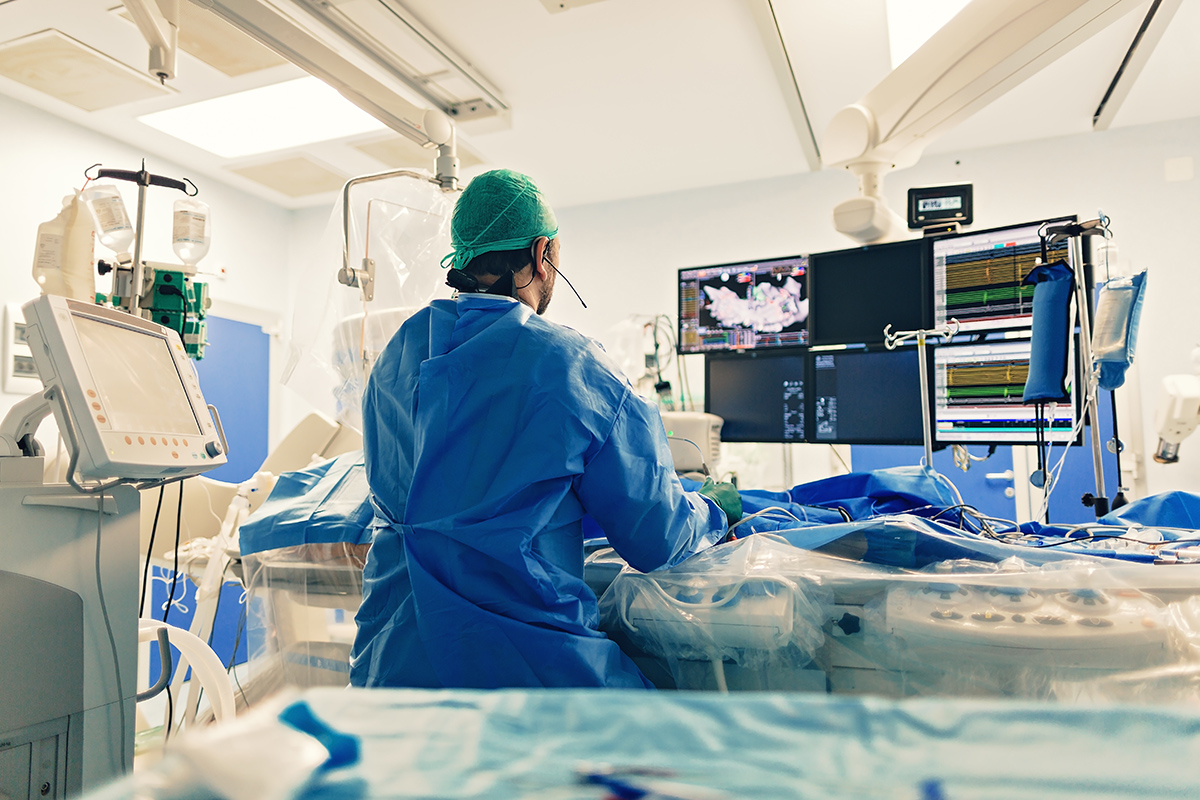 Given the unmet need for a dedicated mitral THV, a multitude of research studies are underway with devices specifically designed for the complex geometry of the mitral apparatus. A significant exclusion criterion from these studies is the risk of left ventricular outflow tract (LVOT) obstruction – a feared complication of TMVR that portends a 62 percent in-hospital mortality.1

Careful preprocedural 3D cardiac computed tomography (CT) planning is essential to define the risk of LVOT obstruction and the need for a preventive strategy. Our practice at Emory first determines the mitral annular plane. Next, one cardiac cycle is reviewed to determine the phase that will represent the narrowest neo-LVOT (typically 40 percent phase).

Once defined, a virtual THV can be placed and oriented based on the predicted path of valve deployment. LVOT surface areas are measured, and patients with a predicted LVOT of <200 mm2 are deemed to be at high risk for LVOT obstruction. An additional measurement is performed at the narrowest area between the transcatheter valve skirt and the interventricular septum – the "skirt neo-LVOT."3 Patients with a skirt neo-LVOT of <150 mm2 are also deemed to be at high risk of LVOT from the skirt THV.

What options are available to treat patients with an elevated risk of LVOT obstruction? Surgical transatrial leaflet resection has been performed but requires cardiopulmonary bypass and is often not an available strategy for a patient who has already been deemed to be at high risk for mitral repair or replacement.

Alcohol septal ablation has been used as both a preventive and therapeutic strategy. Significant limitations of the technique are the need for an adequate septal perforator artery, the risk of damaging additional myocardium in patients who often have an underlying cardiomyopathy, creation of an iatrogenic ventricular septal defect, conduction disturbances, and the need to delay TMVR to allow for myocardial remodeling.

This technique was originally used on a compassionate basis and given encouraging clinical data a 30-patient investigational device exemption trial (IDE) was completed in 2018.2 Full details of the technique have been published previously.2

Briefly, LAMPOON is performed using modifications of commercially available devices. Two transfemoral guide catheters are advanced retrograde through the aortic valve. One catheter is placed in the LVOT and the other is advanced into the left atrium.

Similar with other electrosurgical procedures, a 0.014 wire (Astato XS 20, Asahi, Japan) is insulated in a polymer jacket (Piggback Wire Converter, Teleflex, NC), advanced through the LVOT catheter to the anterior mitral leaflet and electrified to facilitate traversal. This wire is then snared, externalized and the flying-V is created. Once the flying-V is positioned on the anterior mitral leaflet, the wire loop is electrified and laceration is performed. 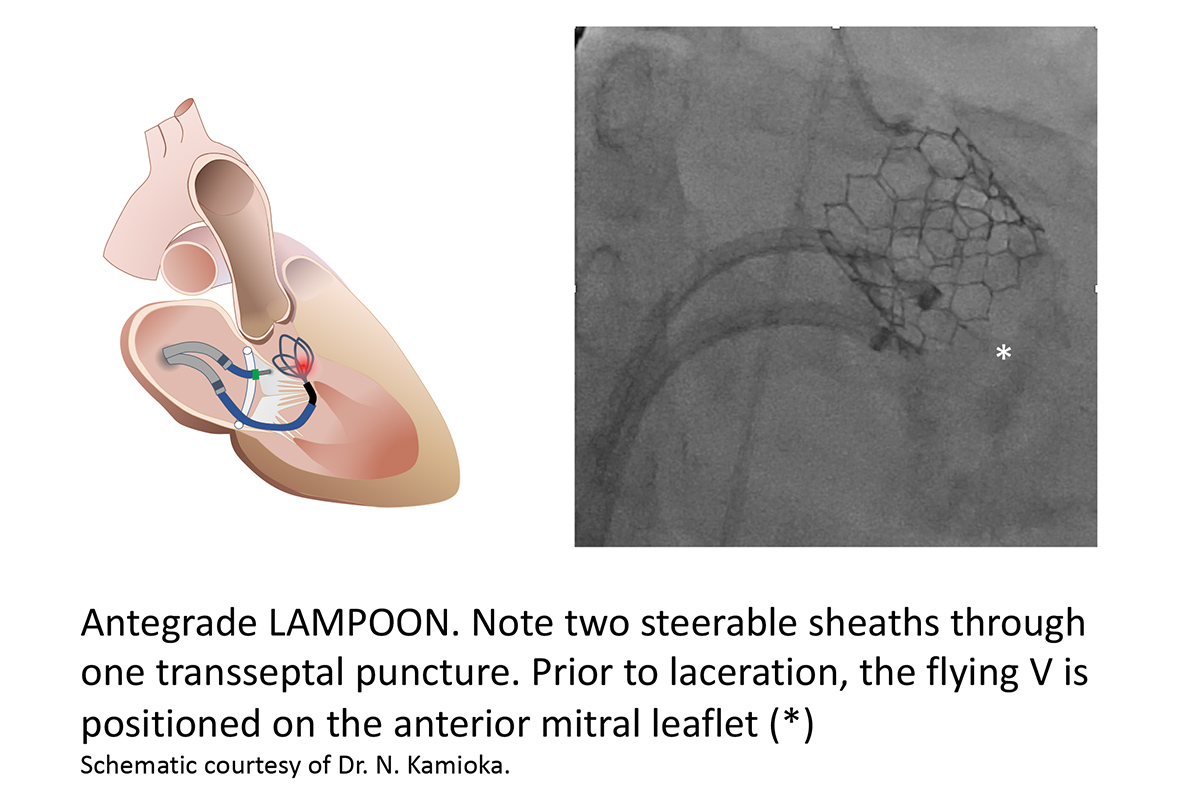 Via the JR4 guide, the insulated Astato wire is introduced, and the tip of the Astato is energized with 50W pure cut power and advanced through the anterior mitral leaflet. The leaflet laceration and TMVR are then performed in the standard fashion. To date, this modification has been performed at Emory eight times. Preliminary results were presented at TCT 2019, with 100 percent successful leaflet traversal, 100 percent midline laceration, 100 percent successful TMVR implantation, and 100 percent of patients with a mean LVOT gradient <30 mmHg.4 Further study is underway.

It is critical to remember that the LAMPOON technique cannot overcome LVOT obstruction from the THV skirt.3 In cases at high risk for skirt obstruction, an additional adjunctive technique must be performed. Alcohol septal ablation followed by LAMPOON has been performed in these situations. Additionally, Emory is studying the use of targeted radiofrequency ablation to perform the Scorpion (Septal correction to prevent iatrogenic left ventricular outflow tract obstruction) procedure.5

In addition to anterograde LAMPOON, there is now a family of LAMPOON techniques including LAMPOON to facilitate implantation of a Tendyne valve (Abbott, Abbott Park, IL),6 ELASTIC (applying electrosurgery to lacerate a surgical Alfieri stitch prior to TMVR)7 and ELASTA-CLIP (applying electrosurgery to selectively lacerate MitraClips (Abbott, Abbott Park, IL) from the anterior mitral leaflet prior to TMVR with Tendyne).8 YOU ARE HERE: Home > Latest in Cardiology > LAMPOON: Addressing Patients With Elevated LVOT to Undergo TMVR