Introduction
Colchicine, extracted from the colchicum autumnale plant, is one of the most ancient anti-inflammatory medications still used nowadays. Its major mechanism of action relies on inhibition of tubulin polymerization and of the inflammasome. Despite its potential gastro-intestinal side effects, colchicine is a safe anti-inflammatory medication that has traditionally been used for the treatment of gout and Familial Mediterranean Fever (FMF). It has recently been shown to reduce the risk of ischemic cardiovascular events in patients with coronary artery disease. In the context of pericardium-related diseases, colchicine has proven useful in the setting of acute and recurrent pericarditis. Its impact on constrictive pericarditis and post-pericardiotomy syndrome remains to be clarified. This expert review will provide an overview of the major available data with regards to the use of colchicine for the treatment of pericardial diseases. These data are summarized in Table 1.

Table 1: Overview of the major available data with regards to the use of colchicine for the treatment of pericardial diseases. CI: confidence interval; PPS: Postpericardiotomy syndrome.

Colchicine Profile
Colchicine is a lipid-soluble drug. It is characterized by a bioavailability of 44%, a peak plasma concentration reached one hour after oral intake, CYP3A4-related metabolism, and predominant excretion by the liver (only 10-20% being excreted by the kidneys). Colchicine should not be administered chronically in patients with an estimated glomerular filtration rate less than 30 ml/min/1.73 m2 or during treatment with a powerful CYP3A4 inhibitor. It exerts its anti-inflammatory action through binding to tubulin and inhibition of microtubule polymerization leading to reduced inflammasome activation and blunted pro-inflammatory cytokine release. Colchicine concentrates preferentially in white blood cells, thus resulting in anti-inflammatory effects at low doses. Colchicine's mechanism of action is summarized in Figure 1. 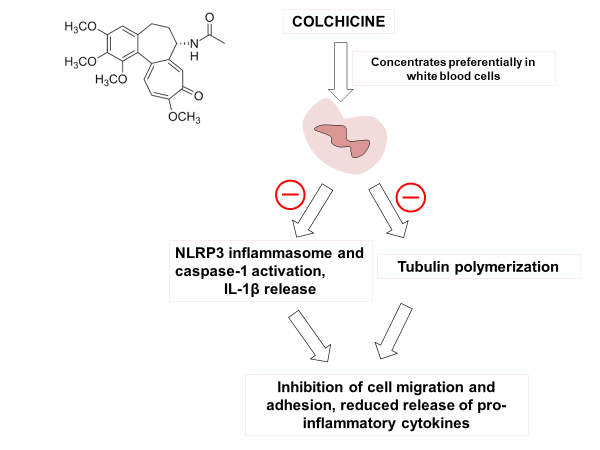 Acute and Recurrent Pericarditis
The benefit of colchicine is well established in acute viral or idiopathic pericarditis as well as in recurrent pericarditis. The COPE (COlchicine for acute PEricarditis) prospective, randomized, open-label trial, which included patients with a first episode of acute pericarditis, showed that colchicine, in addition to conventional anti-inflammatory therapy, significantly reduced symptoms at 72 hours (11.7% vs. 36.7%; p=0.003).1 In addition, the recurrences of pericarditis at 18 months were significantly less frequent in patients under colchicine when compared to placebo (10.7% vs. 32.3%, respectively; p=0.004 and number needed to treat (NNT) to prevent one recurrence = 5).1

The CORE (COlchicine for REcurrent Pericarditis) study was an open-label prospective trial in which patients with a first recurrence of acute pericarditis were randomized to receive either aspirin alone or aspirin plus colchicine (1 mg per day) for 6 months.3 The association of aspirin plus colchicine demonstrated a significant reduction in the rate of recurrent events at 18 months compared with aspirin alone (24.0% vs. 50.6% respectively, p=0.02) after a mean follow-up of 20 months.3

The Colchicine for Recurrent Pericarditis (CORP) study was a multi-center controlled randomized trial involving 120 patients with recurrent pericarditis, in which the association of colchicine plus aspirin/non-steroidal anti-inflammatory drugs (NSAIDs) showed a significant reduction in recurrent events at 18 months in comparison with aspirin/NSAIDs alone (relative risk reduction, 0.56 (95% CI, 0.27 to 0.73); NNT=3).4 In addition, colchicine reduced the persistence of symptoms at 72 hours (relative risk reduction, 0.56 (CI, 0.27 to 0.74); increased the remission rate at 1 week, and prolonged the time to subsequent recurrence.4

Finally, the CORP-2 (Efficacy and Safety of Colchicine for Treatment of Multiple Recurrences of Pericarditis) trial investigated the effects of colchicine on top of conventional anti-inflammatory therapy for recurrent pericarditis, and demonstrated that, in patients with two or more episodes of recurrences, the addition of colchicine to aspirin/NSAIDs was more effective than aspirin/NSAIDs alone in preventing future episodes (relative risk 0.49; 95% CI 0.24-0.65; p=0.0009).5

Postpericardiotomy Syndrome
Postpericardiotomy syndrome (PPS) has been described in up to 40% of patients after cardiac surgery, and may develop within days or months after pericardial injury. The role of colchicine in PPS has been tested in the COPPS (COlchicine for the Prevention of the Post-pericardiotomy Syndrome) study, a double-blind, multi-center, randomized, placebo-controlled trial, where one month of colchicine therapy (started on day 3 after surgery) demonstrated a significant reduction in the incidence of PPS at 12 months compared with placebo (8.9 vs. 21.1%, respectively, p=0.002; NNT=8) without significant side effects.6

The COPPS-2 (COlchicine for prevention of the Post-pericardiotomy Syndrome and Post-operative Atrial Fibrillation) study had a design similar to that of COPPS except that colchicine was started 48-72 hours prior to the index cardiac surgery and was continued for a total of one month after surgery.7 In COPPS-2, preventive colchicine therapy was associated with a significant reduction in the incidence of PPS compared to placebo (19.4% and 29.4% respectively, 95% CI, 1.1%-18.7%; NNT = 10).7 Notably, there were no significant differences between colchicine and placebo for the secondary endpoints of post-operative atrial fibrillation (33.9% vs. 41.7%, respectively) or post-operative pericardial/pleural effusion (57.2% vs. 58.9%, respectively).7

Conclusion
Colchicine is clearly efficacious for the treatment and prevention of acute and recurrent pericarditis and represents the cornerstone of therapy of these pericardial diseases. The safety and tolerability of colchicine has been demonstrated in large randomized cardiovascular trials.

YOU ARE HERE: Home > Latest in Cardiology > The Role of Colchicine in Recent Clinical Trials - A Focused Review on Pericardial Disease