Are PCSK9 Inhibitors the Next Front-line Therapies to Improve Vascular Dysfunction in People with Pro-inflammatory States?

The identification of proprotein convertase subtilisin/kexin type 9 (PCSK9) in 2001 with characterization of its gene in 2003 paved the way for one of the most fascinating discoveries in modern cardiology.1 PCSK9 is the ninth member of the proprotein convertase family and is responsible for transporting the hepatic LDL receptor to its destruction in the lysosome, thus preventing recycling of the receptor to the hepatocyte cell surface and thereby increasing levels of circulating LDL-C.

Its role in cholesterol metabolism was rapidly recognized and led to the development of monoclonal antibodies inhibiting PCSK9 and The Food and Drug Administration (FDA) approval in 2015, based on data from the PROFICIO1 and ODYSSEY outcome studies.2 Beyond its role in cholesterol homeostasis, PCSK9 is present in endothelial cells, vascular smooth muscle cells and immune cells,3 suggesting that PCSK9 may play a role in vascular inflammation and atherosclerosis through mechanisms independent of the degradation of hepatic LDL receptor.

Clinical study findings support the role of PCSK9 in vascular inflammation. Li et al. found that the levels of PCSK9 are associated with the severity of coronary artery disease and vascular inflammation after adjusting for confounding factors.4 In a Swiss cohort of 2,030 patients with acute coronary syndrome undergoing coronary angiography, PCSK9 levels were positively correlated with inflammatory markers.5 In people living with HIV, significantly elevated serum PCSK9 levels were observed and correlated with P-selectin and thrombomodulin, markers of endothelial activation and injury.6

Overexpression of PCSK9 induced pro-inflammatory cytokines IL-1α, IL-6 and TNF-α through the induction of the TLR4/NF-κB signaling pathway.4 The NF-κB signaling pathway regulates vascular inflammatory responses and plays a critical role in atherogenesis.9 PCSK9 also enhances the expression of the endothelial cell LOX (the lectin-like oxidized LDL-receptor 1), which subsequently increases the uptake of oxidized LDL and induces inflammation, once again through the activation of the NF-κB pathway.10

Endothelial Dysfunction, an Early Marker of Vascular Inflammation and Atherosclerosis

Coronary endothelial dysfunction is associated with reduced nitric oxide-mediated vasodilator properties – a pro-inflammatory state that impairs the function and patency of the coronary vessels.11 Abnormal coronary endothelial function is one of the earliest markers of the development of atherosclerosis.12 While endothelial dysfunction is well recognized in the traditional forms of cardiovascular diseases, it is also present in non-traditional cardiovascular inflammatory conditions such as HIV.6

Study of the coronary endothelial response to stressors and to various interventions traditionally required invasive coronary catheterization, limiting its use in stable patients and in longitudinal studies. Magnetic resonance imaging (MRI)-based methods have been validated as providing safe measures of coronary endothelial function.13,14 Such methods are based on the relative (percentage) change in coronary cross-sectional area and coronary blood flow from rest to those during isometric handgrip exercise, a known endothelial-dependent stressor, which in the presence of normal endothelial function results in increases in coronary cross-sectional area and coronary flow. These responses are nitric oxide-mediated, as demonstrated by near complete blockade with L-NMMA, a nitric oxide synthase inhibitor.14 MRI-based non-invasive coronary endothelial function measures offer a safe and accurate alternative to cardiac catheterization, and are easily applicable for the study of endothelial dysfunction in stable, low-risk populations.

The EVOLVE study15 is a single‐center pilot clinical trial, conducted at the Johns Hopkins Hospital, that enrolled stable patients with dyslipidemia, and no prior coronary artery disease (CAD) demonstrated on coronary computed tomography angiogram (CTA), and people living with HIV on stable treatment and suppressed viral loads <100 copies/ml. In both groups. baseline MRI showed decreased or absent coronary vasodilation and increase in coronary blood flow with handgrip exercise, corroborating previous findings from earlier work in another cohort of people living with HIV.6

The EVACS study16 was a double blind, placebo-controlled study examining the impact of PCSK9 inhibition on the atherogenic profile in the peri- and early post-infarction period. Fifty-seven patients who suffered a type 1 non-ST-segment elevation myocardial infarction with troponin level ≥5 ng/ml were randomized within 24 hours of presentation to either a single subcutaneous injection of evolocumab 420 mg or placebo, in addition to standard care including high-intensity statin. LDL-C significantly decreased from baseline by day 1 in the evolocumab group. By day 3, LDL-C levels in the evolocumab group were significantly lower than those in the placebo group and remained lower throughout the hospitalization and at 30-day follow-up.

While only 38% of patients in the placebo group met the American College of Cardiology (ACC)/American Heart Association (AHA) secondary prevention target (<70mg/dL) for LDL-C at hospital discharge, 80% of the participants who received evolocumab did so. In addition, 24% of patients in the placebo group reached the European Society of Cardiology (ESC) LDL-C target (<55mg/dL) versus 65% in the evolocumab group. Significantly lower levels of other atherogenic lipoproteins – apolipoprotein B and non-high-density lipoprotein cholesterol – were also observed in the evolocumab, compared to the placebo group. There were no significant differences in the side effects associated with evolocumab and placebo.

These findings are consistent with reports from other investigators. A recent study from Europe reported that only 40% of patients on statin therapy achieved LDL-C <70 mg/dL after first myocardial infarction.17 In Evolocumab for Early Reduction of LDL Cholesterol Levels in Patients With Acute Coronary Syndromes (EVOPACS), the placebo group (receiving standard care including high-intensity statin) achieved a mean LDL-C level of 77 mg/dL at 4 weeks and 80 mg/dL at 8 weeks. Only 38% of patients in the placebo group achieved LDL-C levels <70 mg/dL, while >95% of patients in the evolocumab group met their target LDL-C at 8 weeks.18 Overall, current data show that achieving secondary prevention cholesterol targets with statins alone during the early post-infarction period are not possible in many patients.

PCSK9 inhibitors are currently primarily utilized in patients with an atherogenic lipid profile who fail to optimize cholesterol with first-line lipid-lowering therapies (statins plus/minus ezetimibe) or those who are intolerant to or have contraindications to first-line treatments.19 Recent clinical data suggest that PCSK9 inhibition improves endothelial function in patients with inflammatory states such as HIV infection and dyslipidemia and baseline dysfunction, which is known to play a key role in the development and progression of atherosclerosis.

Clinical data consistently show that atherogenic lipoproteins remain above secondary prevention targets in a significant proportion of patients receiving statin therapy alone. The potency and extremely rapid onset of action of PCSK9 inhibition, coupled with a favorable safety and tolerability profile, make this an attractive therapeutic strategy to achieve early and aggressive reduction of pro-inflammatory atherogenic lipoproteins in high risk states such as the immediate post-acute coronary syndrome period.

The clinical benefit of such approaches, however, require additional investigation. 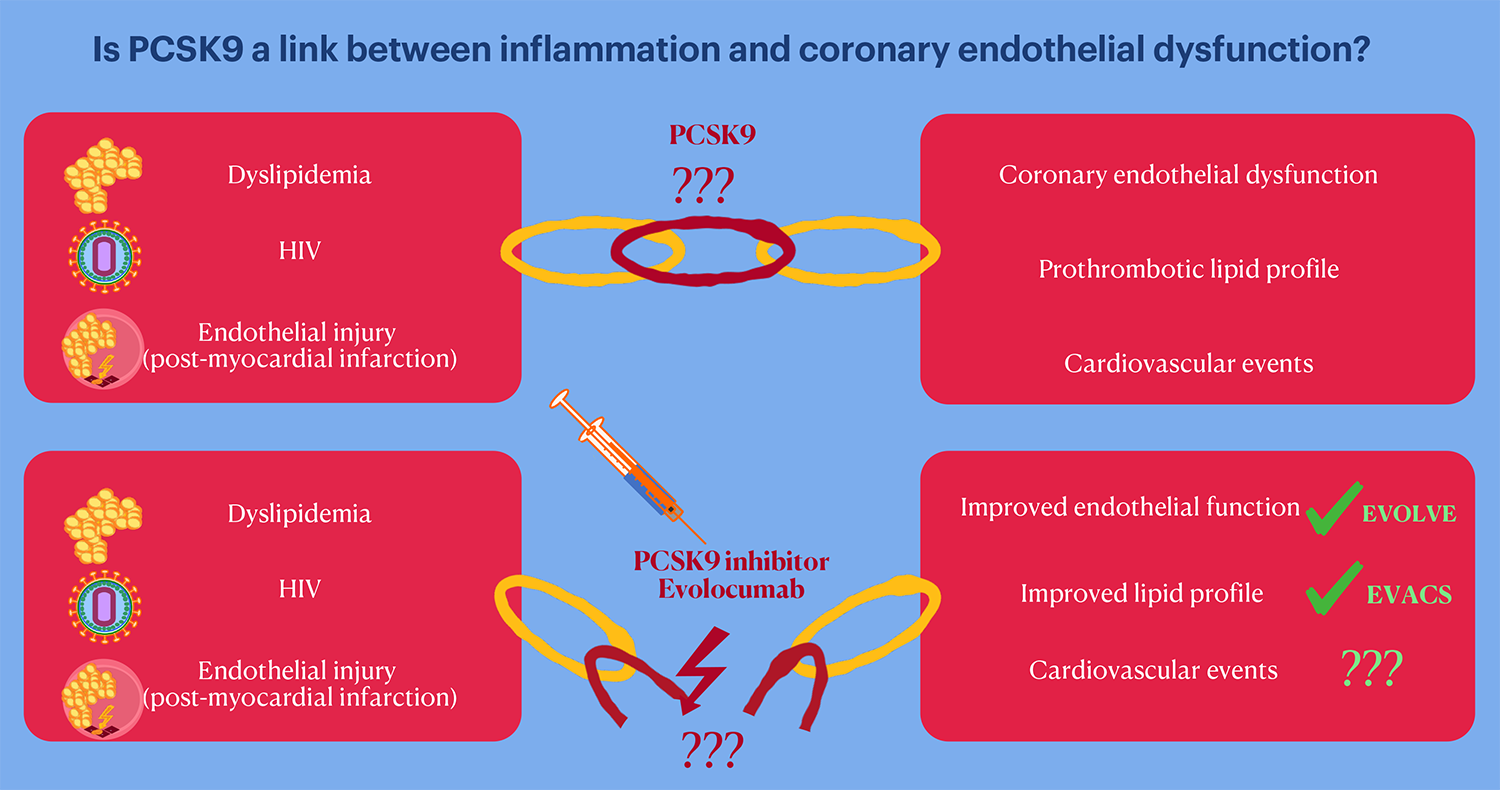 YOU ARE HERE: Home > Latest in Cardiology > Are PCSK9 Inhibitors the Next Front-line Therapies to Improve Vascular Dysfunction in People with Pro-inflammatory States?