Introduction
Pulmonary vein isolation is currently recommended when antiarrhythmic drug (AAD) therapy fails to control symptoms in patients with paroxysmal atrial fibrillation (AF). Although catheter ablation is a Class Ia recommendation after failed treatment with AADs in the current guidelines, it is a Class IIa recommendation for fist-line therapy. However, more recent studies have shown that early rhythm control is associated with better cardiovascular outcomes1 and that earlier diagnosis to ablation times is associated with decreased AF burden. Some studies suggest that early ablation decreases the risk of progression to more persistent AF, which is more difficult to manage.2-5

Study Design
STOP-AF FIRST was a multicenter randomized study with a 1:1 randomization to cryoballoon ablation versus AADs in drug naïve patients.

Inclusion Criteria
Patients who were 18-80 years of age with recurrent symptomatic paroxysmal AF were enrolled at 24 centers in the United States. Key exclusion criteria were

Endpoints
The primary efficacy endpoint was treatment success at 12 months, which was defined as freedom from the following:

The primary safety endpoint was analyzed only in the ablation group and was a composite of the following pre-specified procedure-related serious adverse events:

Results
There were 104 patients in the ablation group and 99 in the AAD group with a relatively early diagnosis of AF (within 1.3 years) and with normal left atrial size and left ventricular function.

Efficacy Endpoint
Freedom from failure was 74.6 % in the ablation group versus 45% in the AAD group (Figure 1). There were only 2 safety events in the ablation group: 1 pericardial effusion and 1 myocardial infarction 7 days after the procedure. There were no significant major pro-arrhythmic complications in the AAD group; however, 15 patients in the AAD group crossed over to ablation due to documented AAD side effects in 10 patients, ongoing symptoms in 4 patients, and atrial arrhythmia detected on cardiac monitoring conducted outside of the trial protocol in 3 patients. 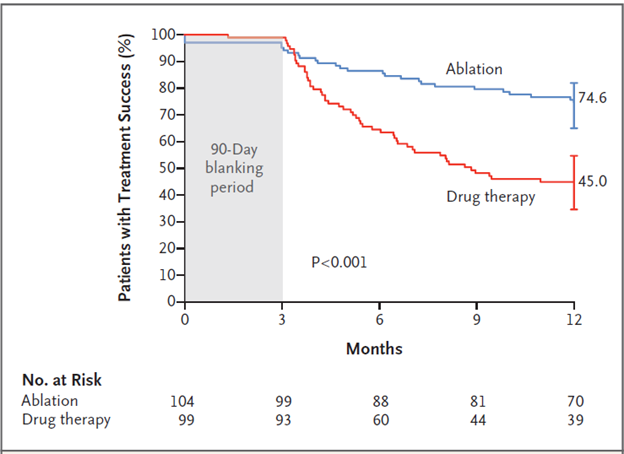 Discussion
In STOP-AF FIRST, initial therapy with cryoballoon ablation was superior to initial therapy with AADs. In the ablation group, 75% were free from primary events versus only 45% in the AAD group. There were only 2 safety events (1.9%) in the ablation group. In the drug arm, 13% discontinued treatment within 12 months and 34% underwent ablation within a year after randomization. These findings highlight the challenges associated with drug therapy for long-term rhythm control. Moreover, there were more than double the number of hospitalizations and emergency department visits in the AAD group versus the ablation group.

YOU ARE HERE: Home > Latest in Cardiology > Cryoballoon Ablation as Initial Therapy for AF: STOP-AF First