In 2015, a cardiac arrest algorithm was published in the Journal of the American College of Cardiology1 that served as a useful tool in risk stratification of patients with ST-segment elevation myocardial infarction who received resuscitated cardiac arrest who would be unlikely to benefit from emergent cardiac catheterization procedure with coronary intervention. Ten unfavorable features were identified through registries and the literature that contributed to the risk estimate.

This paper was widely reviewed, well-referenced, and served as a useful tool in emergency departments. However, users of the tool frequently asked which unfavorable feature carried the most weight or if there were several factors or a combination of factors that contributed to increased mortality and hence hesitation in an emergent trip to the cardiac catheterization laboratory.

Several risk scoring systems have been published over the years,2-4 but the tools were cumbersome and not well-validated. The popularity of the cardiac arrest algorithm1 prompted Kern and colleagues to validate the importance of 8 of the unfavorable factors (excluding end-stage renal disease and non-cardiac causes of arrest) through a retrospective analysis of 2,508 patients in the International Cardiac Arrest Registry and provide a quantitative tool for improved risk estimation. A modification and update to the original algorithm was published in Journal of the American College of Cardiology this week.5

As described in this algorithm (Figure 1), a combination of 3 unfavorable factors—age >85 years, >30 minutes to a return of spontaneous circulation (ROSC), and a non-shockable rhythm—is the strongest predictor of <10% chance of survival. Any combination of 6 of these 7 risk factors (age >85 years, >30 minutes to ROSC, non-shockable rhythm, pH <7.2, lactate >7.0, unwitnessed arrest, and no bystander cardiopulmonary resuscitation) is also associated with a <10% chance of survival. Presence of any 2 of these unfavorable features is associated with >40% survival, and presence of any 3 of these is associated with a <40% survival rate. 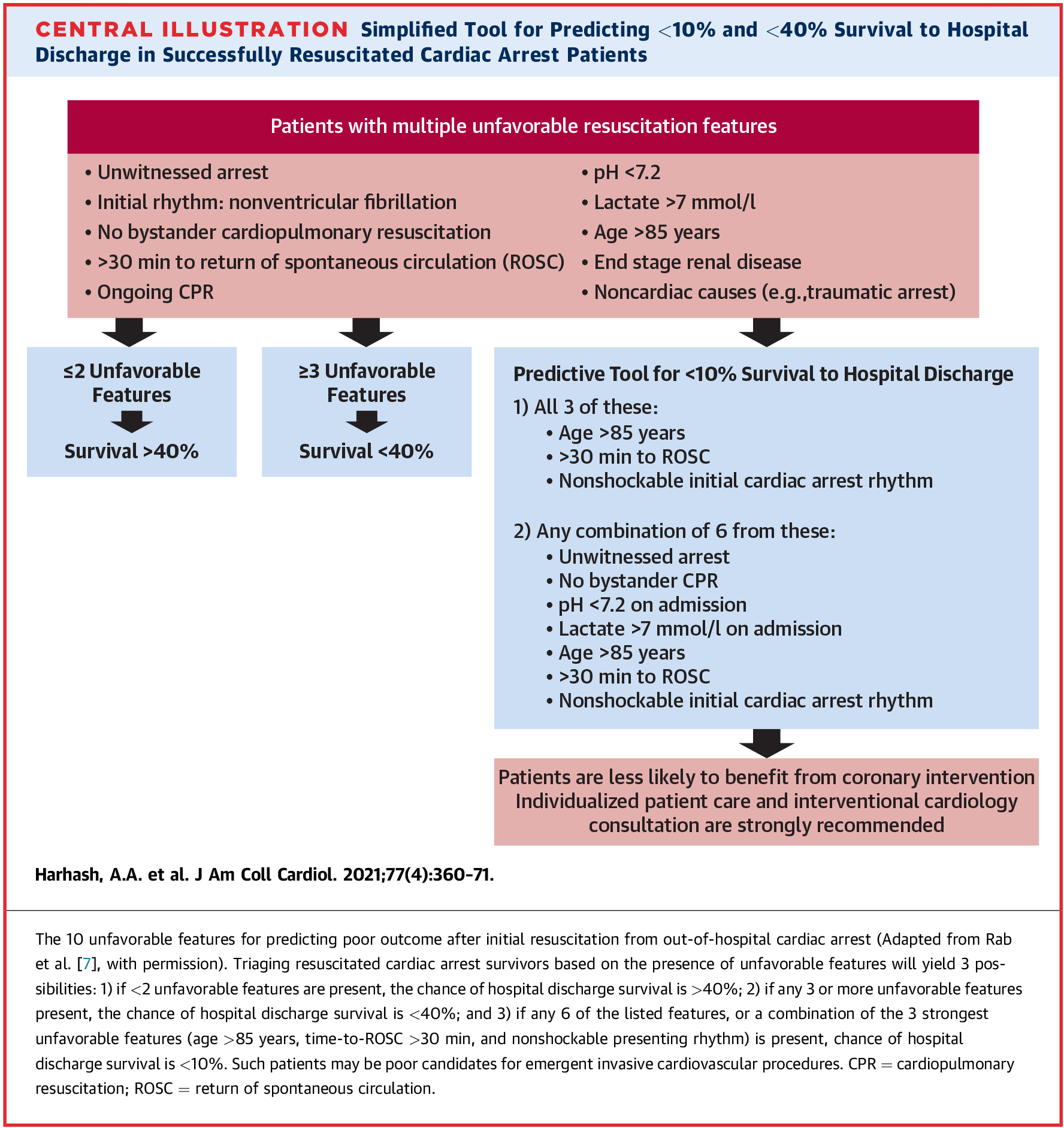 It is important to emphasize that individual patient assessment and interventional cardiology consultation is of utmost importance in stratifying cardiac arrest patients with ST-segment elevation myocardial infarction who have achieved ROSC for emergent cardiac catheterization. The algorithm in Figure 1 is an important adjunctive tool providing a simplified way of estimating risk in clinical decision-making.

YOU ARE HERE: Home > Latest in Cardiology > Know This Predictive Tool for Estimating Survival After Resuscitated Cardiac Arrest