In a recent poll, most responders opted to prescribe icosapent ethyl (EPA only) to a 70-year-old patient with a recent ST-segment elevation myocardial infarction. The second most common answer was to not recommend any n-3 polyunsaturated fatty acids due to insufficient evidence. Few responders chose to add an EPA/DHA combination or over-the-counter fish oil supplement.

Similarly, in STRENGTH (Long-Term Outcomes Study to Assess Statin Residual Risk With Epanova in High Cardiovascular Risk Patients With Hypertriglyceridemiatrial), the use of n-3 polyunsaturated fatty acids (EPA/DHA combination) did not result in a reduction of cardiovascular events in patients with hypertriglyceridemia and high cardiovascular risk. On the other hand, two randomized studies using the highly purified icosapent ethyl (EPA only) showed a significant reduction in cardiovascular events. In the open-label JELIS (Japan EPA Lipid Intervention Study), moderate dose EPA (1.8 g/day) resulted in a 19% reduction in adverse events mainly driven by unstable angina and revascularization. In REDUCE-IT (Reduction of Cardiovascular Events With Icosapent Ethyl–Intervention Trial), high-dose EPA (4 g/day) was compared with mineral oil placebo resulting in a 25% reduction in the primary cardiovascular outcome. The study was criticized for the use of mineral oil as it appears to have resulted in an increase in low-density lipoprotein cholesterol levels in the placebo group. When reviewed by the US Food and Drug Administration, this increase in low-density lipoprotein cholesterol was thought to be insufficient to fully explain the observed benefits of high-dose EPA, and the medication was granted approval.

At the present time, current evidence does not support the use of combination EPA/DHA omega-3 fatty acids in patients with prior myocardial infarction or at high cardiovascular risk. There may, however, be a benefit from EPA-only compounds such as those used in the JELIS and REDUCE-IT trials. 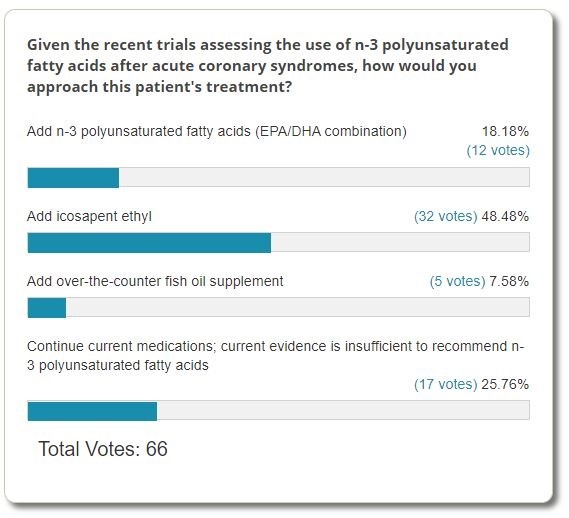 YOU ARE HERE: Home > Latest in Cardiology > Poll Results: Omega-3 Fatty Acids in Elderly With ACS