Atrial fibrillation (AF) is the most common sustained arrhythmia encountered in clinical practice. In addition to reductions in quality of life, functional status, and cardiac performance, AF is associated with an increased risk of stroke and reduced survival. The contemporary management of AF is centered on improving arrhythmia-related symptoms and reducing the morbidity and mortality associated with AF. Over the past 15 years, catheter ablation has emerged as an important non-pharmacological treatment option for highly symptomatic patients in whom antiarrhythmic drugs (AADs) are ineffective or poorly tolerated.1-4 However, these studies were performed in patients who had already failed AAD therapy, weighting the benefit toward ablation. Relatively few studies have compared ablation to AADs as the initial therapy.5-7

Previous studies have attempted to answer whether a population may exist for whom the effectiveness of the procedure would be sufficiently high and the risks sufficiently low that it would be appropriate to offer AF ablation as first-line therapy. Prior studies of first-line radiofrequency catheter ablation have been limited by the use of intermittent noninvasive rhythm monitoring and high rates of cross-over from AADs to ablation (25-28%), blunting the ability to detect a difference between treatment groups.5-7 In aggregate, the 3 randomized studies of first-line radiofrequency ablation reported relatively low absolute success rates (45.5-52.7% freedom from atrial tachyarrhythmia in the ablation arm vs. 27.9-43.9% in the AAD arm) with a low aggregate relative benefit with first-line radiofrequency ablation (relative risk [RR] 0.81 for any arrhythmia; 95% confidence interval [CI], 0.68-0.96; p = 0.01; and RR 0.62 for symptomatic arrhythmia; 95% CI, 0.38-1.01; p = 0.06), which, when combined with the lack of procedural standardization and inconsistent procedural endpoints, have limited the impact of these studies.5-7

The EARLY-AF (Early Aggressive Invasive Intervention for Atrial Fibrillation) trial sought to evaluate the role of cryoballoon ablation versus AADs in the first-line treatment of AF in AAD-naïve patients.11 Patients randomized to cryoballoon ablation underwent circumferential pulmonary vein isolation using a second-generation cryoballoon, with a procedure endpoint of bidirectional block after a 20-minute observation period. Patients randomized to AADs had their AADs aggressively optimized using standardized titration protocols.12 In contrast to previous studies, all patients in the EARLY-AF trial received an implantable cardiac monitor for continuous rhythm monitoring, with all arrhythmia events undergoing independent adjudication by a committee blinded to treatment allocation.

The EARLY-AF study enrolled 303 patients, randomizing 154 to undergo cryoballoon ablation and 149 to receive AAD therapy.12 Among the 152 patients who underwent ablation, complete pulmonary vein isolation was confirmed in all patients, with a median procedure duration of 106 minutes (interquartile range [IQR] 89-131). Among patients randomized to AAD therapy, the most frequently prescribed AAD was flecainide at a median daily dose of 200 mg per day (IQR 125-250).

Figure 1: Freedom From Any Atrial Tachyarrhythmia 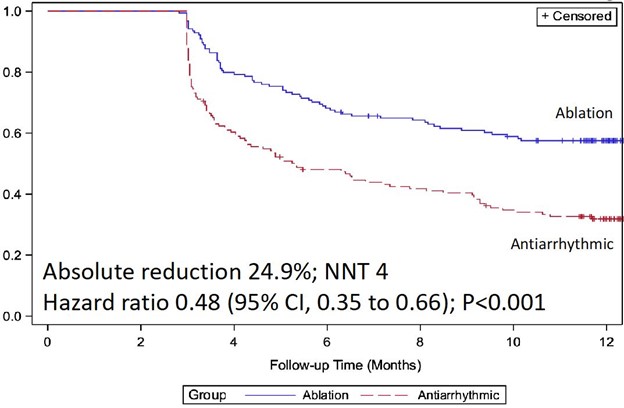 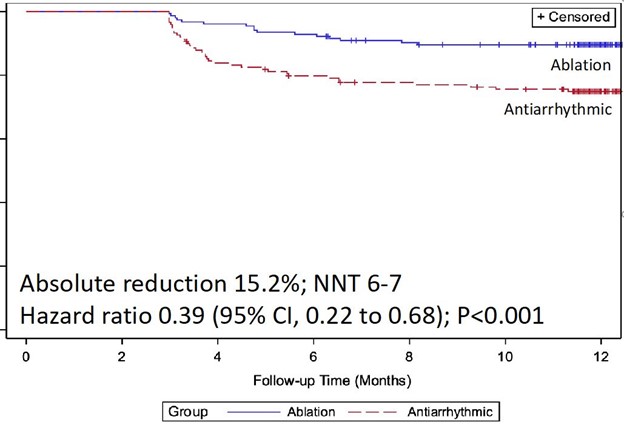 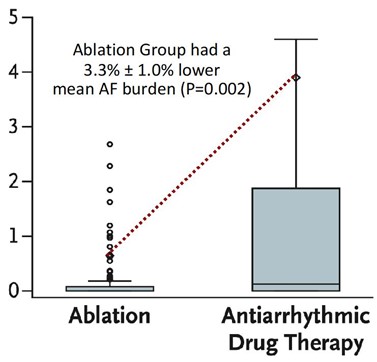 Complementarily, the EARLY-AF trial focuses on the question of how rhythm control can be effectively achieved in highly symptomatic patients with treatment-naïve AF. The EARLY-AF trial has demonstrated that first-line cryoballoon ablation was superior to AADs for the outcomes of atrial tachyarrhythmia recurrence, arrhythmia burden, and quality of life. In terms of arrhythmia recurrence, the number needed to treat was 4 to prevent any atrial tachyarrhythmia recurrence and 6 to prevent symptomatic atrial tachyarrhythmia recurrence. In terms of AF burden, the mean difference between groups corresponded to the equivalent of 1 fewer day with AF per month. In terms of quality of life, the difference between treatments groups more than twice exceeded the minimally clinically relevant difference (i.e., 5 points on AFEQT score). Although the overall outcome of health care utilization was not significantly different between randomized groups, there was a numerical reduction in health care utilization events (cardioversion, emergency department visits, hospitalization) in the first-line ablation group, with a trend toward reduction for hospitalization (p = 0.05).

The design of the EARLY-AF trial included several unique features to address the aforementioned limitations of the previous first-line ablation studies. Specifically, although intermittent noninvasive rhythm monitoring is the most widely used method of ascertaining arrhythmia recurrence, it lacks sensitivity in detecting sporadic arrhythmias (e.g., paroxysmal AF), leading to under-detection of recurrences and introducing misclassification errors that could potentially impact the accuracy and precision of comparative risk estimates. Instead, the EARLY-AF trial relied on implantable loop recorders to precisely determine the presence and timing of arrhythmia recurrence, as well as examine quantitative outcomes such as arrhythmia burden. Second, in an effort to ensure that the treatment comparison was robust, the dose of AADs in the pharmacotherapy group was aggressively up-titrated using standardized protocols over a 3-month treatment optimization period with a goal of complete AF suppression on loop recorder monitoring. Third, the trial employed pre-specified protocols, including the establishment of an independent committee, in an effort to ensure that no patient in the EARLY-AF trial crossed over between randomized groups prior to experiencing a primary endpoint event.

It is postulated that an early intervention may have beneficial effects on progression to more-persistent forms of AF, but this question could not be addressed in the current study because follow-up was limited to 12 months. Additional studies will be needed to determine the longer-term impact of early catheter ablation on the progression of AF, health care utilization, cost-effectiveness, and patient-reported outcomes. In addition, the EARLY-AF trial was performed with a single ablation technology. Although previous studies have suggested similar outcomes with contact-force radiofrequency ablation and cryoballoon ablation,14 the results of the EARLY-AF trial may not be generalizable to the use of other ablation energy sources or technologies. Lastly, the quality-of-life results demonstrated superiority of the ablation strategy over AADs, although blinding of participants to the treatment strategy cannot be achieved without a sham procedure.

A strategy of first-line cryoballoon ablation was superior to AADs for the treatment of patients with drug-naïve AF. Compared to AADs, cryoballoon ablation is demonstrably superior in freedom from atrial tachyarrhythmia recurrence, superior in reduction in AF burden, and superior in improvement in quality of life. These findings are relevant to inform patients, providers, and health care systems regarding the choice of rhythm-control therapy in patients with drug treatment-naïve AF.

YOU ARE HERE: Home > Latest in Cardiology > Cryoablation or Drug Therapy for Initial Treatment of AF (The EARLY-AF Trial)