An Angiographic Risk Score for 12-Month Restenosis in Femoropopliteal Intervention

Paclitaxel (PTX)-coated devices are reliable tools to reduce restenosis risk and improve long-term vessel patency after femoropopliteal (FP)-endovascular therapy (EVT) for patients with peripheral artery disease (PAD).1-3 However, a recent meta-analysis suggested that these devices could possibly increase the risk of long-term mortality.4 Regulators now recommend limiting the use to patients who are expected to be at high risk for restenosis after conventional EVT. However, the classification of patients who are "at high risk" is not well defined. Therefore, this study aimed to identify anatomical features associated with the 12-month restenosis risk after FP-EVT in the current real-world clinical practice, and to develop a novel angiographic scoring system for risk stratification.

The current study used a clinical database called the IntraVascular UltrasOund-SuppoRted Endovascular Therapy in Superficial Femoral ArterY Disease (IVORY) registry. IVORY is a prospective multicenter observational study that registered adult patients in whom intravascular ultrasound-supported FP-EVT was planned for symptomatic atherosclerotic PAD (Rutherford category 1 to 6) between November 2015 and June 2017. Registration was in advance of EVT, and patients in whom bypass surgery and/or major amputation after EVT was originally planned were excluded. The study subjects were enrolled in 33 participating centers across Japan and were followed for 1 year. In total, 2018 limbs from 1,766 patients were enrolled. After enrollment, two patients were excluded due to residual inflow stenosis, another was excluded due to a lack of angiographically significant stenosis, and a further patient had unsuccessful wire crossing. Also excluded were cases treated with drug-coated balloons (n=8) due to the small sample size, those treated with different kinds of stents (n=28), and those not taking two or more antithrombotic drugs (n=179). Consequently, the current study analyzed the remaining 1,799 limbs from 1,578 patients. The study endpoint was 12-month primary patency (i.e., freedom from restenosis) as assessed by duplex ultrasound or follow-up angiography, with a range of ±2 months. Restenosis was defined as a peak systolic velocity ratio >2.4 according to duplex ultrasound or the recurrence of stenosis ≥50% of the arterial diameter, as determined by angiography. The need for any reintervention or major amputation (defined as surgical limb removal above the ankle) within 1 year was automatically counted as restenosis. The risk factors for 12-month restenosis were explored with a generalized linear mixed model with a logit-link function in which interinstitutional and intersubject variability were treated as the random effects. The multiple imputation method was adopted to address missing data. 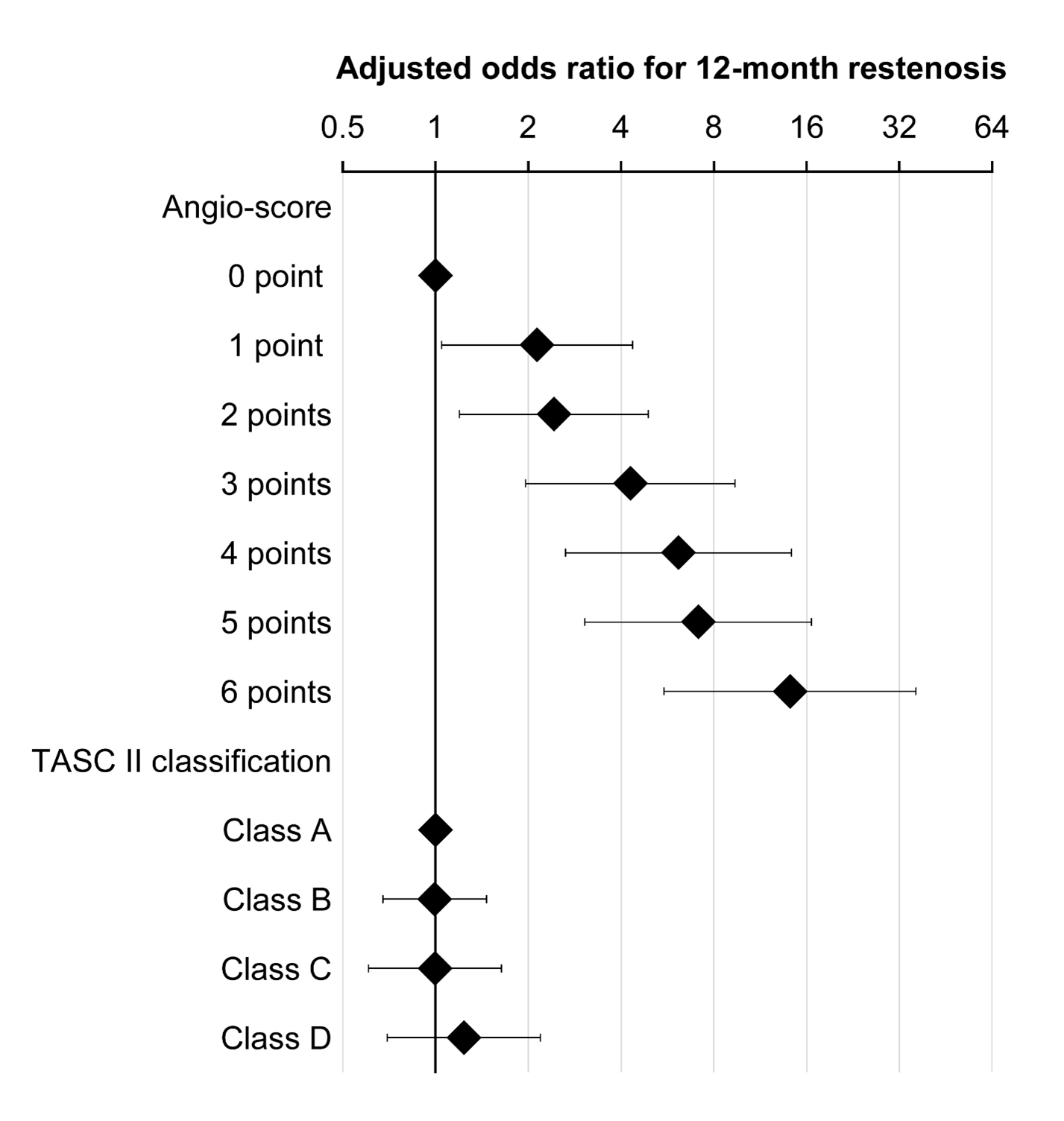 We concluded that a novel angiographic score, which includes reference vessel diameter, lesion length, and CTO, is a useful tool to assess 12-month restenosis risk after femoropopliteal EVT in a real-world clinical practice.

YOU ARE HERE: Home > Latest in Cardiology > An Angiographic Risk Score for 12-Month Restenosis in Femoropopliteal Intervention