The development of progressive sinus bradycardia in response to endurance training is well recognized and frequently used as a marker of physical fitness. The mechanisms underlying this physiology are less well understood. Traditionally, it has been ascribed to higher 'vagal tone', or lower 'sympathetic tone', in athletic individuals.1,2

Problems with the Vagal Tone Hypothesis
The evidence that high vagal tone is solely responsible for training-induced sinus bradycardia is tenuous and indirect.3 It is not possible to directly measure the vagal outflow to the heart in vivo in humans.4 Instead, heart rate variability (HRV) parameters have most commonly been used as indirect surrogates of cardiac vagal tone. Taking this approach is neither trivial nor straightforward. None of the many dozens of available time-, frequency- or non-linear-domain HRV parameters are pure markers of vagal tone to the heart. Furthermore, many of the foundational studies that 'proved' HRV markers are associated with athletic training-induced increases in vagal tone failed to make necessary corrections for the effect of slower heart rates in trained individuals on calculated HRV parameters – one should not directly compare any HRV parameter between two or more distinct groups (e.g. trained and untrained individuals) without compensating for the effect of different heart rates on the calculated HRV.3,5,6

Changes in Intrinsic Heart Rate Suggest Intrinsic SAN Remodeling
Clues to what else other than high vagal tone could lead to sinus bradycardia in athletic individuals have been present in the scientific literature for many years (Figure 1). The 'intrinsic heart rate' remains once both arms of the cardiac autonomic nervous supply have been pharmacologically blocked, classically with atropine and a beta-blocker. Typically it is around 105 beats per minute in young and healthy individuals.7 A significant body of literature exists that shows in both humans and animals, intrinsic heart rate is lower in trained versus sedentary individuals.3 This would suggest that there is something that changes within the sinus node to account, in part, for the bradycardia that occurs in response to training. 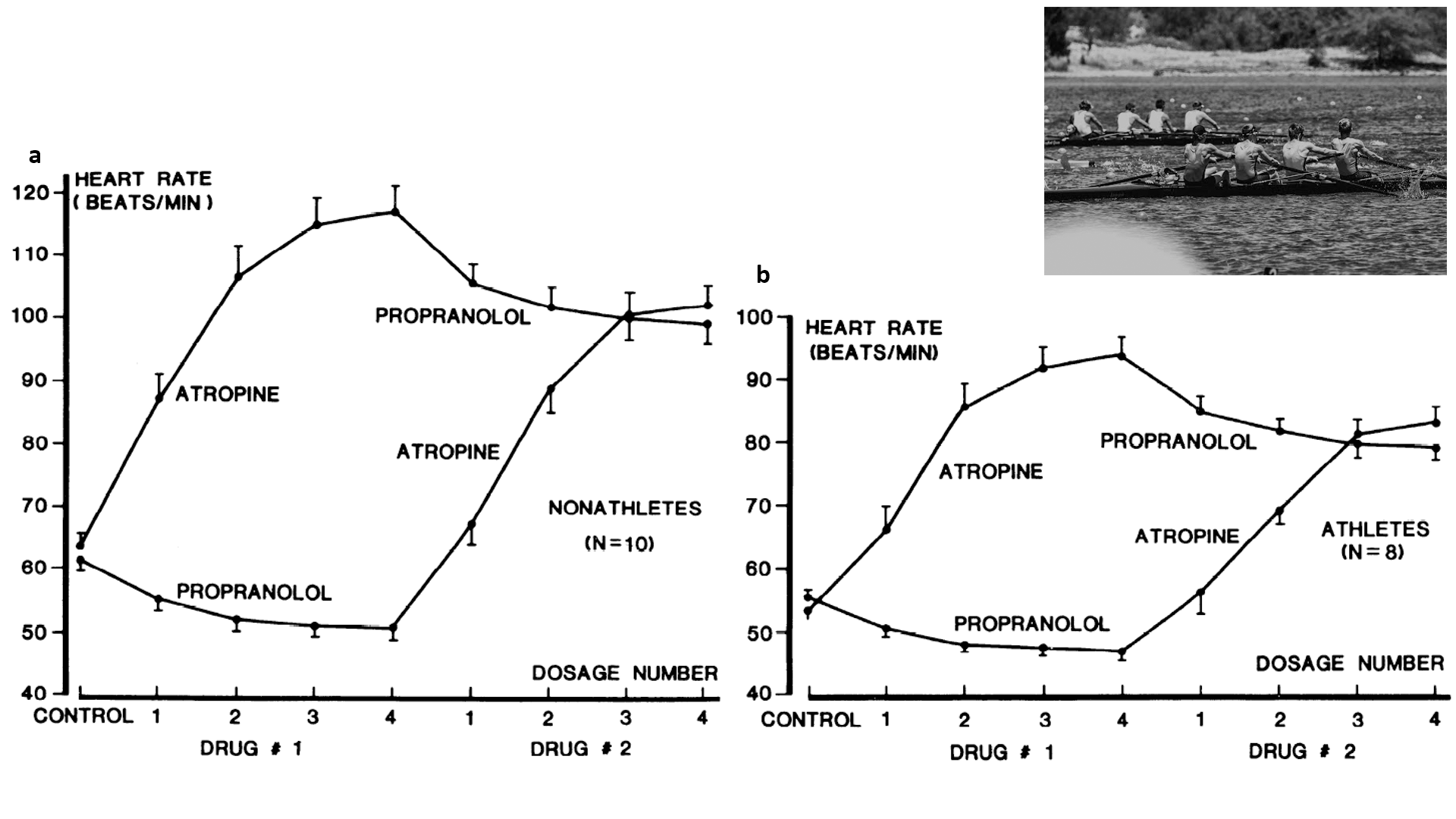 'The Coupled Clock'
Extensive research over the last 50 years has led to the current paradigm of what causes automaticity in the sinoatrial node (SAN).8 Our current and evolving understanding9 revolves around a complex 'coupled clock' system (Figure 2). The first clock is a 'membrane clock' involving time- and voltage-dependent behaviors of multiple SAN membrane ion channels that produce inward and outward currents depending on the phase of the cardiac cycle. This includes the 'pacemaker current' If, so-called because it carries the 'funny current', activated on hyperpolarization, operational throughout diastole and contributing to diastolic depolarization. The second clock is a 'calcium clock' involving spontaneous calcium cycling into and out of the major intra-SAN cell store, the sarcoplasmic reticulum, via ryanodine receptors. The two clocks interact critically with each other through the currency of calcium and are controlled via similar mechanisms of phosphorylation and dephosphorylation to yield clock synchronization/desynchronization. The outcome of these complex interactions yields the full range of heart rates required in vivo by an organism. Remarkable heterogeneity of the cells within the SAN guarantees robustness of this life-sustaining physiologic process.10 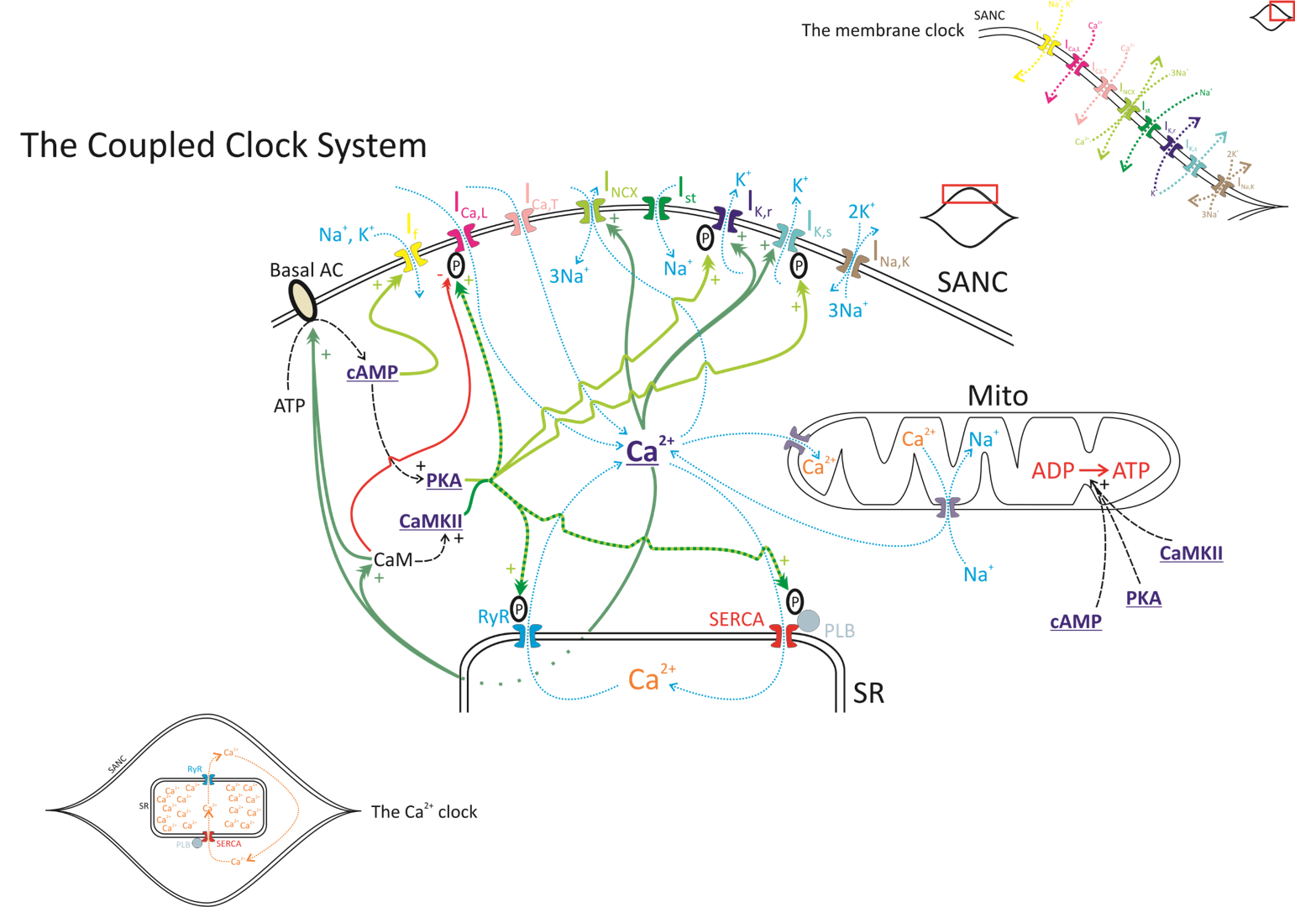 Electrophysiological Remodeling of the SAN as an Explanation for Training Induced Bradycardia
Studying SAN cellular electrophysiologic remodeling involves the use of animal models of athletic training. Using a mouse swimming model and a rat treadmill running model, both of which led to an increase in VO2 max and resting bradycardia, replicating the effects of human training, D'Souza et al.11 showed that the intrinsic heart rate decreased in response to training and that this was related to remodeling (in this case a decrease) in the funny current component of the membrane clock. Furthermore, there was marked remodeling in a myriad of components of the coupled clock , suggesting that the effects of training within the SAN are complex and wide-ranging. Detraining reversed this SAN electrophysiologic remodeling when performed in the acute setting. In a follow up paper,12 D'Souza et al. went on to show that athletically trained humans also appear to have downregulated funny current in their SAN. The bradycardic effect of ivabradine (a direct inhibitor of If) was much less marked in a group of elite cyclists compared to untrained individuals. They used the same animal models as before to show that training increased levels of a microRNA (miR-423-5p) specifically within the SAN, but not in other regions of the heart, and that a short duration of treatment with a targeted antagomir not only blocked expression of miR-423-5p, but also reversed training induced bradycardia and changes in funny current expression, opening the door to the possible development of therapeutics targeted at potential pathological aspects of training induced bradycardia.

Does Physiological SAN Remodeling in Response to Training Ever Become Pathological?
While it is clear that even marked sinus bradycardia (rates in the 20s and 30s) in young athletes is well tolerated at rest, some limited published evidence and clinical experience suggests that the incidence of electronic pacemaker implant is higher in older, veteran athletes who have accumulated many lifetime hours of training than in sedentary individuals.13-15 A combination of electrophysiologic remodeling, autonomic changes, and structural changes within the SAN (including the recognized loss of SAN myocytes16 and increased SAN fibrosis17 with age, which may be accelerated in athletes) may contribute to this to varying degrees, along with polygenic variation in susceptibility (Figure 3). It is tantalizing to suggest that novel therapeutics, including the antagomir approach to restoring normal automaticity discussed above, could have clinical benefit to these individuals from undergoing electronic pacemaker implant, and all of the associated short-, medium- and long-term risks of such a procedure. First, we require a more complete understanding of the complex electrophysiologic and structural remodeling that occurs in the SAN in response to training, along with a better understanding of the relative contribution of the autonomic nervous system to this process. Also unclear are the relative effects of different kinds of training/sport on the development of bradycardia, along with the timing of training (throughout life versus 'late starters'). 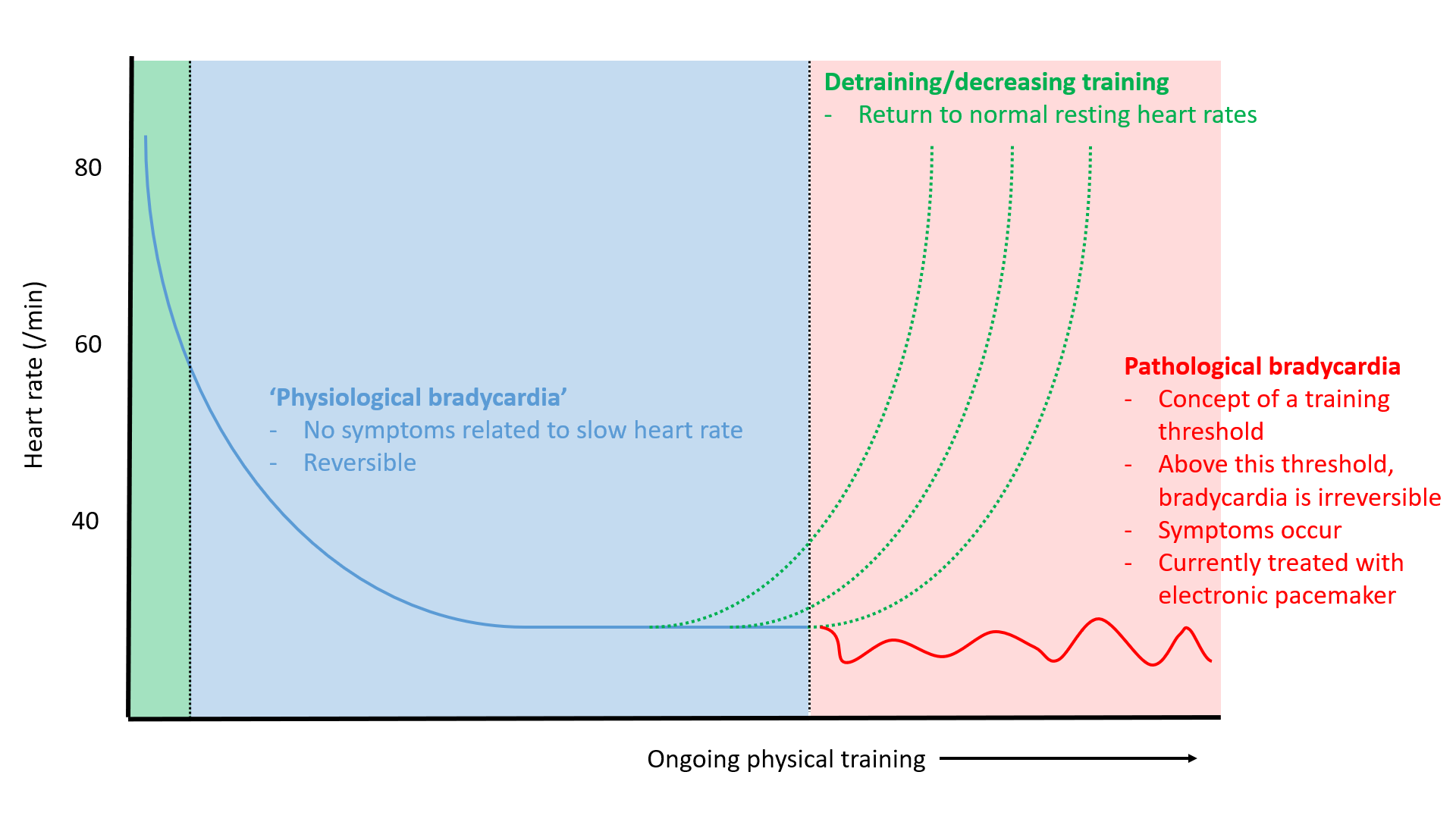