BAD and SAD-MAC: A New Scenario for CLTI

SAD has been associated with poor clinical outcomes in terms of wound healing, time to healing, limb salvage and survival.3-5 CLTI patients may be found to have either BAD, SAD or a combination of both entities. While BAD is usually treatable by means of bypass or angioplasty, SAD is an untreatable disease, leading to the final failure of the vascular distribution system of the foot, and jeopardizing the fate of the limb,6 despite any successful BAD treatment.

Except for a farsighted observation published in 1967 by Ferrier, SAD was never associated with medial artery calcification (MAC).7,8 MAC occurs independently of atherosclerosis and is associated with aging, DM and CKD.9-11 MAC tends to affect the arteries diffusely, appearing as "railroad tracks" along the outline of the arterial wall on plain radiography.12 MAC is a strong marker of future cardiovascular events and death, both in patients with diabetes and CKD.13-18 Moreover, MAC and an elevated ankle brachial index, considered secondary to non-compressible ankle arteries as a consequence of MAC, are associated with clinical manifestations of CLTI, such as foot ulcer, gangrene, and amputation.14-18

Despite this strong association between MAC and CLTI, MAC has been considered by most authors as a "non-obstructive" disease, and the hypothetical "mechanisms of action" connecting MAC and CLTI were supposed to be indirect effects of the arterial wall stiffening: loss of vasomotion and adverse remodeling predisposing to an accelerated vascular aging, atherosclerosis and plaque rupture.9,11,19,20

In our daily practice and applying a standardized angiographic protocol of study,21 we very often observe the coexistence of SAD and MAC in CLTI patients, raising the question if they could be manifestations of the same underlying disease (Figure 1). To answer this question, we investigated the correlation between SAD and MAC in a cohort of 223 patients with 259 CLTI limbs, who underwent treatment between June 2015 and March 2019.6 Mean follow-up was 19 ± 10.8 months. In order to quantify SAD, a previously described angiographic score was utilized,2 whereas for MAC we proposed a new calcium score (Figures 2 and 3). 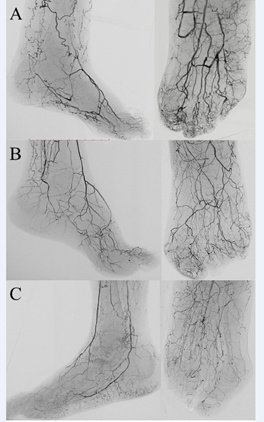 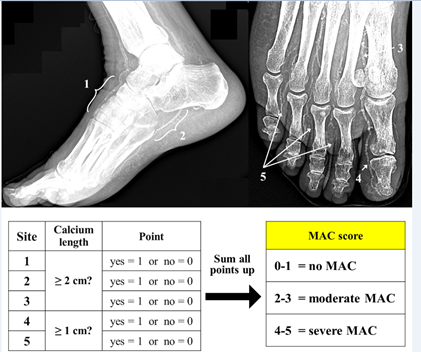 MAC Score is Reproducible and a Powerful Predictor for SAD

The proposed radiographically based evaluation of MAC score was highly reproducible between different observers with a high correlation coefficient (0.96). The distribution of MAC and SAD scores was similar (Figure 4). The sensitivity and specificity of MAC score in predicting SAD was 100% and 98.1% respectively in SAD score group 0 and group 2. For SAD score group 1, MAC score demonstrated a sensibility and specificity of 99.1% and 92.7% respectively.

The localization of PAD tended to be more frequent in the proximal arterial segments in MAC and SAD score groups 0 and more distal in groups 1 and 2. This data supports the hypothesis of two distinct obstructive diseases in CLTI patients: the well-known atherosclerotic BAD, leading to a transmission failure of blood flow to the foot, and the SAD-MAC disease, responsible for the below-the-ankle distribution failure. Below-the-knee (BTK) vessels represent the overlapping land of these two different diseases.

The multivariate analysis demonstrated that MAC scores were independently associated with redo surgical or endovascular procedures and MALEs; a trend close to significance was found for limb salvage.

The main finding of this study is the demonstration that SAD and MAC are two sides of the same coin: a non-atherosclerotic disease spreading to the entire arterial tree and jeopardizing the fate of the limb and of the patient. On one side, MAC causes the "railroad tracks", stiffening the big elastic arteries. On the other side, SAD progressively obstructs the muscular arteries of the foot distribution system, leading to chronic ischemia.

The angiographic evaluation of SAD score is highly difficult. It requires high-definition imaging, contrast dye injections, avoiding movement artifacts, and the final judgement is subjective. On the other hand, a MAC score is easier to obtain, is more reproducible and appears to have the same clinical prognostic power.

Medicine has spent the last 50 years fighting BAD, fed by the "open and endo revolution" that have considered SAD an occasional and unfortunate "no-option" condition. BAD is typically considered an atherosclerotic, plaque-based, focal or multifocal disease, developing from an initial lipid deposition in the intima, and treatable with many powerful weapons: statins, antiplatelets, angioplasty, bypass, etc.

In this study, 44-45% of the patients presented a severe SAD-MAC score, and 29-35% a moderate score, demonstrating how SAD-MAC disease is now a leading actor in CLTI. Today, fueled by age, diabetes, and hemodialysis, we are facing an epidemic of predominantly SAD-MAC-CLTI patients for whom revascularization is not possible and the role of drugs is unclear. It is time to consider SAD-MAC the new target of our efforts and develop new, more appropriate weapons.

YOU ARE HERE: Home > Latest in Cardiology > BAD and SAD-MAC: A New Scenario for CLTI