Aortic Stenosis: Aortic stenosis (AS) is one of the most prevalent forms of cardiovascular pathology in the western world, ranking only behind hypertension and coronary artery disease (CAD).1 Age is an independent risk factor for degenerative aortic valve (AV) disease, with a two-fold increased risk for each 10-year increase in age above the age of 65.1,2 According to one study, the prevalence of AS and severe AS among elderly patients (over 75) is reported at 12.4% and 3.4%, respectively.3 The pathophysiology of AS is characterized by a relatively benign course in patients with asymptomatic disease but once symptoms develop, is followed by a rapidly climbing mortality rate that often exceeds 50%.3 AS is most commonly caused by three etiologies: (i) congenitally bicuspid AV, (ii) degenerative calcification or atherosclerosis of a trileaflet valve, or (iii) rheumatic valvular disease that leads to thickening of the AV leaflets and commissural fusion. Figure 1 depicts both a structurally normal AV and stenotic AV. Individuals with underlying lipid abnormalities including familial hypercholesterolemia (FH) and elevated lipoprotein(a) [Lp(a)] have a higher prevalence of premature atherosclerotic cardiovascular disease (ASCVD) and AS. 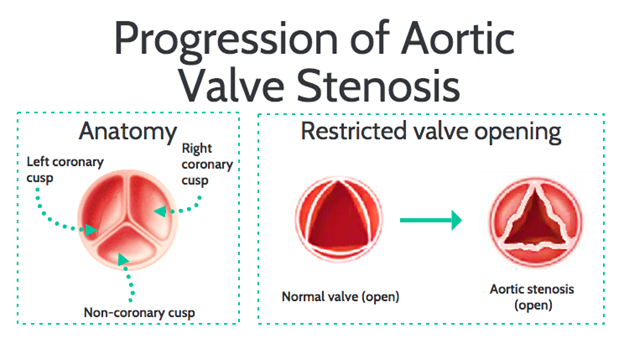 Familial Hypercholesterolemia: FH is a genetically inherited autosomal dominant disorder characterized by lifelong elevations in plasma levels of low-density lipoprotein cholesterol (LDL-C).3 It has an estimated prevalence of 1 in 250 adults. One hallmark of FH is accelerated atherosclerosis due to the exposure to lifelong elevated circulating LDL-C. Suspicion for FH is usually raised with an LDL-C levels ≥190 mg/dL or 160 mg/dL coupled with a family history of early onset ASCVD. Figure 2 depicts the clinical manifestations of FH, which include xanthelesmas, tendon xanthomas, and premature corneal arcus (present at age ≤45 years).

FH remains a clinical diagnosis, but can be confirmed with genetic testing, by looking for pathogenic variants in the genes for the LDL receptor (LDLR), apolipoprotein B, and proprotein convertase subtilisin/kexin type 9 (PCSK9). Patients with untreated heterozygous FH are at approximately 10-20-fold increased risk for premature ASCVD.4 Increased levels of LDL-C, such as those seen in FH, are associated with early manifestations of CAD and AS.5,6

Elevated Lipoprotein(a): Lp(a) is an atherogenic lipoprotein that consists of an LDL particle attached to apolipoprotein(a) [apo(a)]. Roughly 80-90% of an individual's Lp(a) level is genetically determined by autosomal codominant inheritance. Elevated Lp(a) levels are associated with ASCVD and AS. There is a roughly 3-fold increase in the prevalence of AS with elevated Lp(a) levels.5,7 Elevated Lp(a), particularly ≥50 mg/dL, is an independent risk factor for AV calcification and in some cases, rapid progression of AS that can result in the need for AV replacement.6,8 Figure 3 depicts the Lp(a) structure and explains its role in valvular deposition. Elevated Lp(a) is more prevalent in patients with FH and associated with a substantially higher risk of calcific AS in individuals afflicted with both. One Dutch study looking at 8,050 patients found a nearly 6-fold increase in Lp(a) levels in patient with diagnosed or probable FH compared to the general population.9

Figure 3: Lp(a) Molecule and Its Role in Cholesterol Deposition 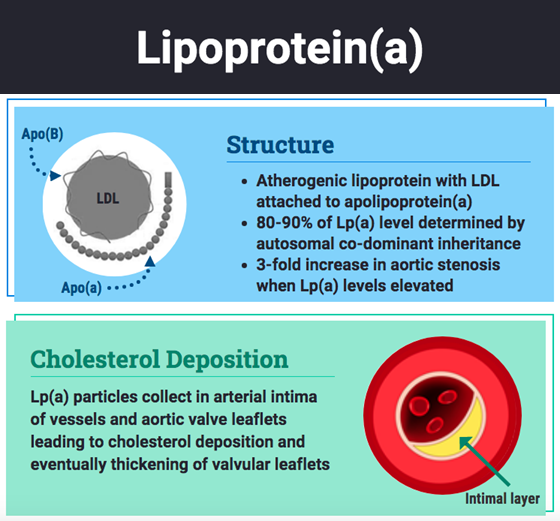 The Intersection of Disorders of Lipid Metabolism and Valvular Heart Disease

Significantly elevated LDL-C levels, as seen in FH, promote early calcification and mineralization of valvular structures via lipoprotein deposition and the formation of cholesterol micro-crystals that commence the calcification process. Furthermore, genetic predisposition to elevated LDL-C has been associated with the presence of subclinical AV calcification and AS in Mendelian randomization studies. In one study of 3,161 Norwegian patients with genetically confirmed FH, the standardized incidence ratio of AS was 7.9. The prevalence of AS is substantially higher in patients with homozygous FH. In a study of 33 young patients (mean age of 26 years) with homozygous FH, 21 patients (64%) had evidence of aortic valvulopathy.5

Several proposed mechanisms link Lp(a) to progressive AS, all of which incorporate the accumulation of lipid and protein components of Lp(a) within the AV. One mechanism suggests a 3-part process: (i) Lp(a) is the major lipoprotein carrier of pro-inflammatory oxidized phospholipids that promote the calcification of vascular cells;10 Lp(a) particles accumulate in the arterial intima of AV cusps leading to cholesterol deposition and thickening (ii) apolipoprotein(a) resembles plasminogen and is thought to promote thrombosis by competing with and inhibiting plasmin's role in dissolving fibrin clots (iii) Lp(a) has been shown to be involved in wound healing by binding to fibrin and traveling to sites of injury. It then may deposit cholesterol at sites of minor injury at the early stages of AV stenosis, enhancing deposition of cholesterol and progressing disease.7

It is important to screen for and diagnose FH and elevated Lp(a) based on clinical history, family history, physical exam, and laboratory data and to recognize the substantially increased risk of ASCVD and AS in these patients. Cascade screening, a mechanism by which close family members of an individual with a diagnosis FH are also screened for FH, is recommended. The goal of this screening is to diagnose and treat FH early to reduce its morbidity and mortality.11 Screening for elevated Lp(a) should be considered in specific high-risk populations including:12

The 2018 American College of Cardiology/American Heart Association (ACC/AHA) Multi-Society Cholesterol Guidelines prioritize LDL-C as the primary target for intervention and begin with initiating a maximally tolerated statin with a goal of lowering of LDL-C by ≥50%. In patients at very high risk for ASCVD with LDL-C levels ≥190 mg/dL, it is recommended to begin high-intensity statin therapy. If the LDL-C level remains greater than 70 mg/dL, the addition of ezetimibe can be considered, followed by consideration of a PCSK9 inhibitor.10 There is a paucity of evidence-based therapies to target Lp(a). Some experts recommend the use of niacin and/or PCSK9 inhibitors, both of which can modestly reduce plasma concentrations of Lp(a).13-15 Novel therapeutics are currently in development to target Lp(a) lowering, however, it is currently unknown whether specifically lowering Lp(a) will translate into reduction in ASCVD risk.16

While lipid- lowering therapy can substantially reduce the risk of ASCVD, large randomized trials of LDL-C lowering agents have not shown a significant reduction in valvular disease progression and this remains an area of investigation.11 Patients with FH and/or elevated Lp(a) should be monitored clinically for the development of AS. If the diagnosis of AS is made, patients should be followed closely for its progression clinically and by echocardiography based on the 2020 ACC/ AHA Guideline for the Management of Patients with Valvular Heart Disease. Table 1 further highlights the guidelines, focusing on diagnostic testing, medical management, and invasive interventions.12

FH and elevated Lp(a) are robust risk factors for ASCVD and AS. While guideline based medical therapy to lower cholesterol has been effective in lowering the risk of ASCVD, this has not yet translated into a reduction of the burden of AS.5 While the early stages of AS may be relatively benign, there is a sharp increase in mortality as its severity increases. Taken together, heightened awareness of the risk in patients with FH and elevated Lp(a), along with making a clinical diagnosis of AS with appropriate follow up and treatment, is crucial.

YOU ARE HERE: Home > Latest in Cardiology > Elevated Lipoprotein(a) in Familial Hypercholesterolemia and its Role in the Progression of Calcific Aortic Stenosis