As women and men can have different presentations and outcomes for the same cardiovascular illness, and much of the foundational cardiovascular research was performed in men, there remains a risk for sex-based disparity in care delivery. With this context in mind, it remains unclear how sex may influence acute pulmonary embolism (PE) symptomatology, in-hospital management, and short-term outcomes, as existing research on this topic has been limited with conflicting results.

Multiple recent studies have found that women with acute PE are older (by 3.7-7 years)1-3 and have higher brain natriuretic peptide (BNP) levels.1,2 Regarding acute PE risk factors, published studies have found both lower3 and similar1 rates of prior venous thromboembolism (VTE) in women, as well as higher1 and similar2 rates of malignancy in women compared to men. Several studies have demonstrated that syncope is a predominant presentation for PE among women, although there have been conflicting conclusions regarding whether other presenting symptoms such as dyspnea, chest pain, and leg symptoms differ between women and men with acute PE.1,2 Massive PE with hemodynamic instability has been found to be more common in women in some studies2,3 but not others.1 The data on sex-based inferior vena cava (IVC) filter use also conflict, with both lower IVC filter use in women2 and similar use3 having been reported. Sex-based differences in outcomes in acute PE have ranged widely in the published literature. Rates of major bleeding have both been reported to be similar between women and men,3 and twice as high in women.1 One study reported a similar rate of recurrent VTE between women and men, as well as a similar cumulative 3-year incidence of all-cause mortality.3 In contrast, multiple studies have found a higher PE-related mortality in women,1,2 possibly attributable to a higher rate of massive PE in women.2

Our retrospective study included 2,031 patients admitted with acute PE to Beth Israel Deaconess Medical Center (BIDMC) between 8/2012-7/2018.4 We used inverse probability of treatment weighting (IPTW) to evaluate the adjusted risk of key outcomes between men and women. In agreement with prior literature, we found that women had a higher mean age, though the age difference (1.5 years) was smaller than other studies have reported.1-3 Women were less likely to have a history of tobacco use, prior VTE, myocardial infarction, or advanced liver disease, whereas women had more rheumatologic disorders and dementia. Therefore, while men had more classic cardiovascular risk factors, women had more traditional VTE risk factors. Dyspnea was a more common clinical presentation for women with acute PE, and hemoptysis was less frequent (Figure 1).4 In contrast to other studies, we did not see any sex-based differences in rates of syncope, limb swelling/pain, or chest pain.1,2 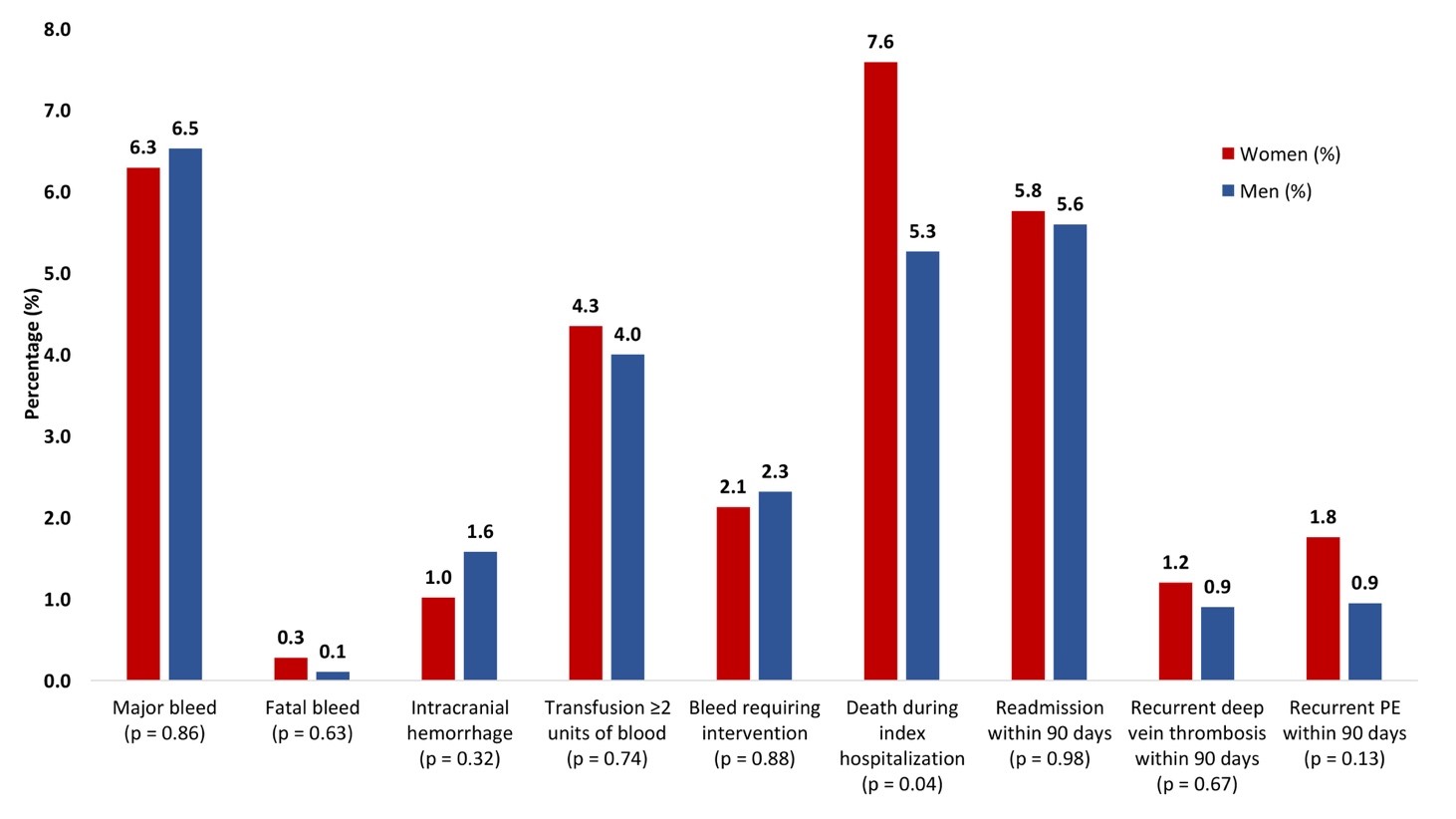 Women in our study had a higher median N-terminal pro-BNP level, which agrees with prior literature, whereas fewer women had abnormal right ventricle (RV) size on echocardiography. Notably, we found no sex-based differences in any inpatient management endpoints, including use of IVC filters or advanced therapies.

Also, of importance, we found that before adjustment, women with acute PE were less likely to survive to discharge, but this difference was no longer apparent after adjustment, suggesting that comorbid conditions, like advanced age and dementia, likely mediated this relationship. After adjustment, there were also no sex-based differences in mortality, major bleeding, readmission, or recurrent VTE (Figure 2).4 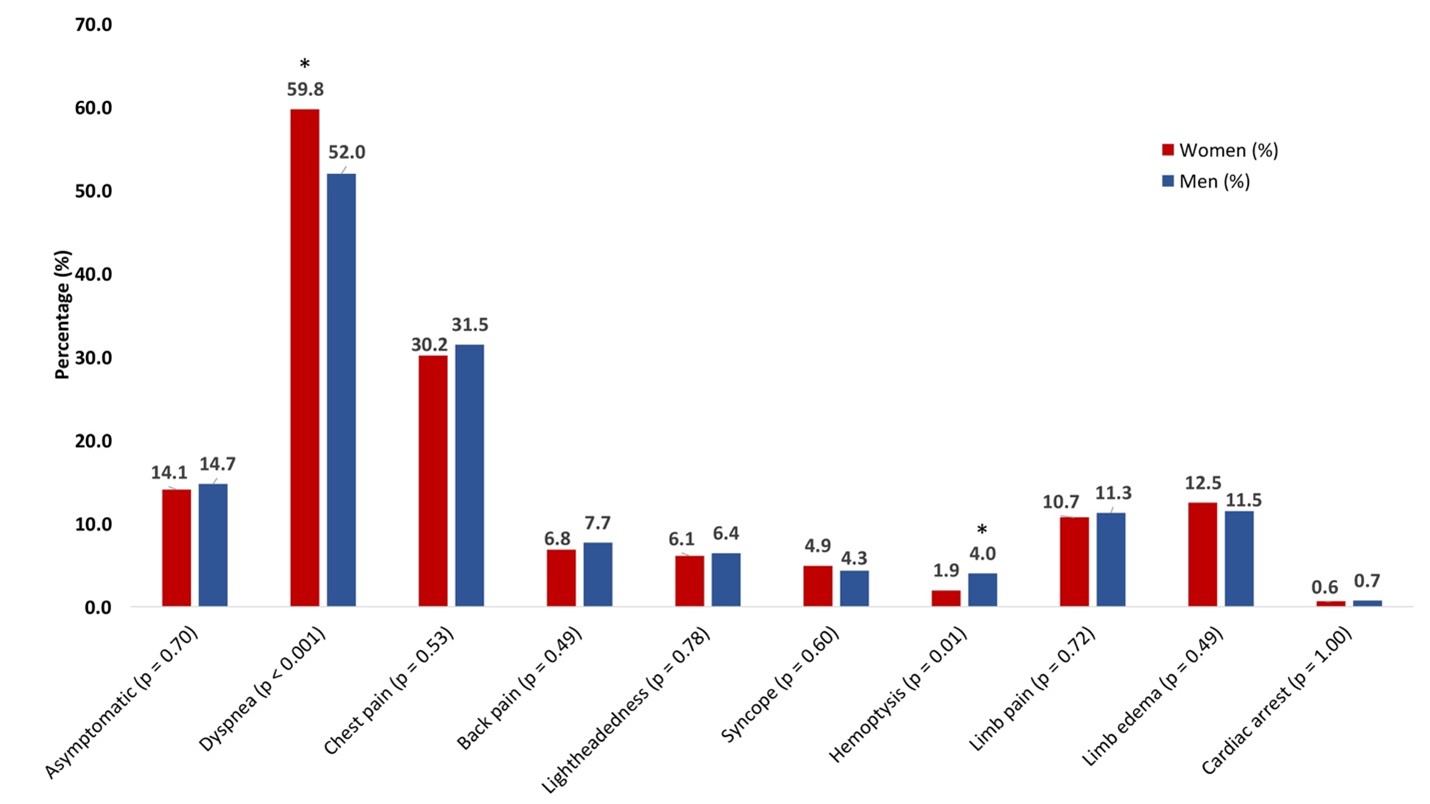 In summary, we found differences in predisposing risk factors for the development of acute PE in women compared with men, as well as variations in presenting symptoms. We found no sex-based differences in PE severity, need for advanced therapies, or short-term outcomes. The published studies on this topic have variable findings, which overall points toward the need for more prospective investigation of this topic to aid clinicians in recognizing significant sex-based differences related to acute PE.

YOU ARE HERE: Home > Latest in Cardiology > Sex-Based Disparities Among Hospitalized Patients with Acute Pulmonary Embolism