The One-Year Results of the JET-ISR Study

Re-intervention on restenotic FP lesions using balloon angioplasty (PTA) alone has a high rate of recurrence of restenosis and repeat target lesion revascularization (TLR).9 Restenotic tissue debulking in FP ISR appears to reduce or delay the need for repeat revascularization and bail-out stenting. In this expert analysis we discuss Jetstream™ atherectomy (JA) as a debulking technique in treating FP ISR.

The application of JA was initially reported by Beschorner et al.10 on 33 patients (40 infrainguinal ISR lesions) treated with the Pathway PV Atherectomy System, the predecessor of the current Jetstream™ system. Primary patency was disappointingly 33 % after 1 year and 25 % at 2 years. Distal embolization occurred in 6% of lesions and bail out stenting was needed in one lesion (3%). Since then, the Pathway System was improved upon with high cutting capability and stronger aspiration system.

Preclinical data was then conducted using JA on FP ISR in overstretched porcine arteries. Data indicated that 2 blade-down runs (each run is from proximal to distal part of the lesion) followed by 2 blade-up runs lead to optimal tissue excision with maximum minimal luminal area gain by the Jetstream™ device11 (Figure 1). This was later validated in a small number of patients with FP ISR.12 Also, preclinical data did not indicate stent disruption which was examined by electron microscopy and high dose radiographs.11

The Jetstream™ -ISR registry was a prospective, pilot registry designed to validate the safety of patients treated with JA for FP ISR.13 In this feasibility study with angiographic core laboratory evaluating stent integrity post-JA, 29 patients (32 limbs) were included. All patients were treated with adjunctive balloon angioplasty (Figure 2). Total lesion length was 17.4 ± 13.1 cm and total treated length 19.5 ± 12.9 cm. Distal embolization occurred in 9.4%. Embolic filter protection was used in half the limbs and macrodebris was noted in 12.5% of filters. There were no new stent fractures or deformities (n=24) as reported by Core Lab. TLR occurred in 13.8% and 41.4% of patients at 6-month and 1-year respectively. Patency rate was 72% at 6 months. 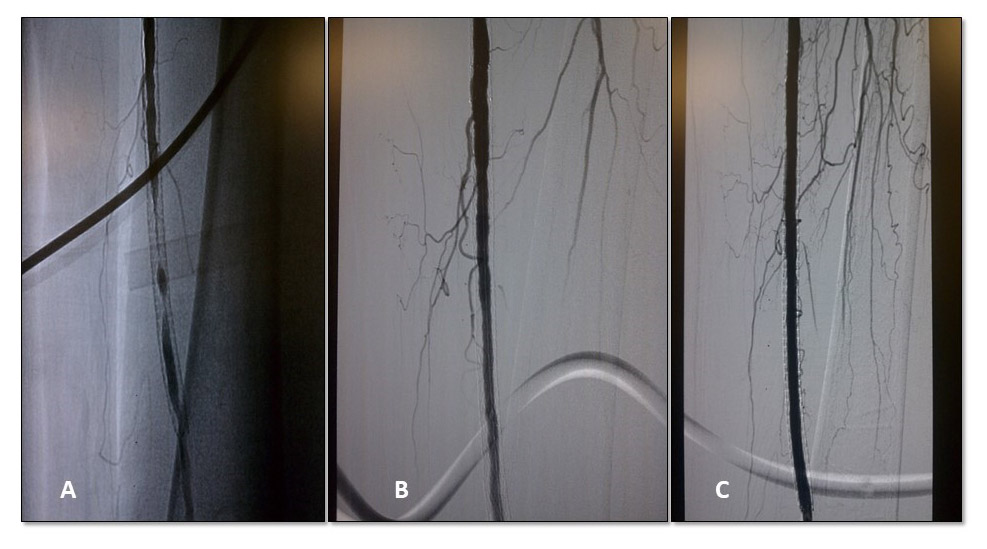 The JET-ISR study14 was a prospective study conducted in 10 centers in the United States and included 60 FP-ISR patients. Lesion length was 19.9±13.5 cm; 33 (55%) were chronic total occlusion (CTO). No drug eluting balloons or stents were allowed. Similar to the Jetstream™ ISR study, core laboratory evaluated stent integrity at baseline, after JA and after final PTA. The primary endpoint was TLR at 6 months with bailout stenting considered as TLR. Secondary endpoints included TLR (without bailout stenting) and clinical patency (no restenosis or TLR) at 1 year.

A meta-analysis of the Jetstream™ ISR and JET-ISR was recently published.18 A total of 92 lesions were treated in 89 patients. Proportional TLR was 21.2%. When this was compared to a performance goal of 37.9% at 6 months with PTA alone, the TLR rate with JA was significantly lower than the TLR rate set for the historic control. Distal embolization occurred in 12.0% (filters used in 76.1% of all cases) and bailout stenting was 8.7%. This data was consistent with laser debulking using EXCImer as seen in the EXCITE-ISR trial. 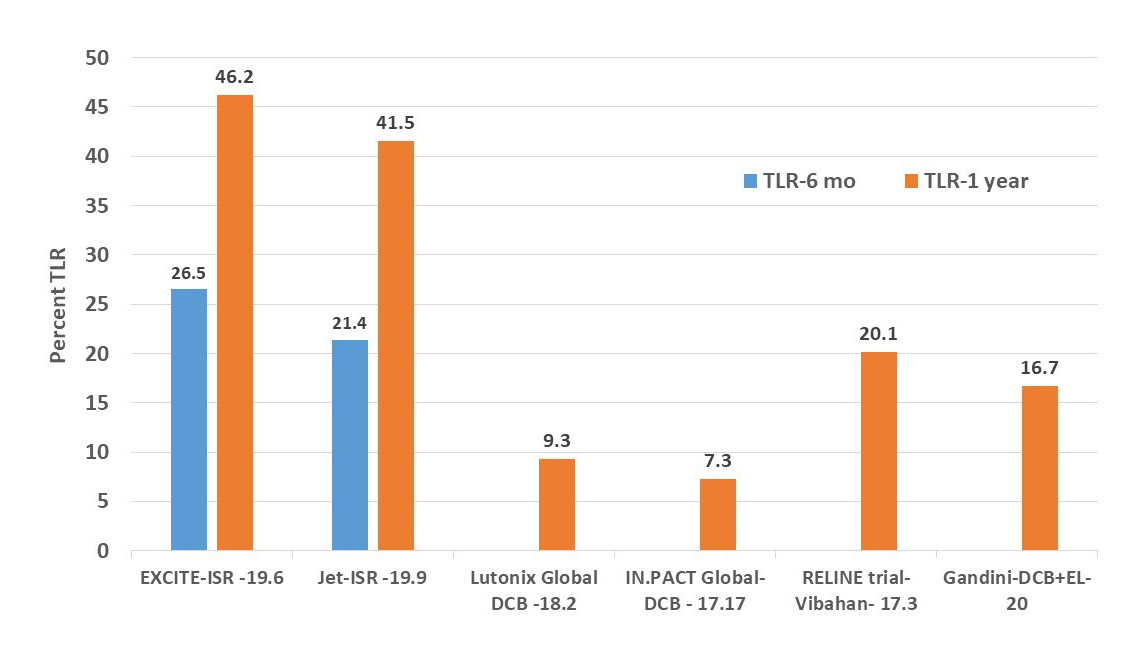 In 48 critical limb ischemia patients with chronic SFA in-stent occlusion19 randomly assigned to laser atherectomy with DCB (n=24) versus DCB alone (n=24), patency at 12 months was 66.7% with laser and adjunctive DCB versus 37.5% in the DCB arm. The JET-SCE study20 was a retrospective analysis that included all comers including de novo disease, restenosis, and in-stent restenosis. In this study, 50 patients received JA alone with adjunctive PTA and 25 patients JA with adjunctive DCB. Freedom from TLR was significantly higher with JA and DCB versus JA and PTA at 12 months (94.7% vs. 68.0%, p = 0.002) and 16 months (94.4% vs. 54%; p = 0.002). The number of FP ISR in this study was small and therefore at this time more data is needed.

JA appears to be safe in treating FP ISR. Stent integrity seems to be preserved but advanced stent fractures (III and IV) at baseline have been excluded from the JET-ISR. Distal embolization remains a problem despite the built-in aspiration system in the Jetstream™ device. Combination therapy is promising with performing debulking and DCB for FP ISR lesions when compared to debulking alone or DCB alone. However, multicenter, randomized data are needed to have level A evidence before the combination therapy can be routinely recommended.

YOU ARE HERE: Home > Latest in Cardiology > The One-Year Results of the JET-ISR Study