Use of DAPT in ACS in the Elderly

Introduction
The randomized clinical trial is the gold standard to evaluate the clinical effectiveness of a therapy. However, the extent to which the results translate into benefits in clinical practice depend on how well the study population in the trial represents real-world patients.

In the PLATO (Platelet Inhibition and Patient Outcomes) trial,1 which has guided the use of a more potent antiplatelet treatment with ticagrelor over clopidogrel since its publication in 2009, a reduction of ischemic outcomes translated into a survival benefit. The median age in the PLATO trial was 62 years, which is about 10 years younger than the median age of patients treated for myocardial infarction (MI) in the real world. In addition to this age difference, elderly patients included in a clinical trial may also differ from real-world patients with regard to type, number, and severity of co-morbidities.

We undertook this observational nation-wide registry analysis to explore whether real-world patients aged ≥80 years with an MI who are treated with ticagrelor compared with clopidogrel derive benefits similar to those seen in the pivotal trial.

Design
This study was based on the near-complete SWEDEHEART (Swedish Web-System for Enhancement and Development of Evidence-Based Care in Heart Disease Evaluated According to Recommended Therapies) nationwide MI registry in Sweden. Elderly patients (≥80 years old) with an MI who were discharged between 2010 and 2017 with a combination of aspirin and either clopidogrel or ticagrelor were included. Patients considered at high risk of bleeding (e.g., treated with oral anticoagulants, prior bleeding events, or anemia) or unlikely to be treated with a more potent antiplatelet medication (e.g., in-hospital coronary artery bypass grafting or dementia) were excluded.

Treatment was not randomly assigned and could hence be affected by selection bias. The main analysis was therefore adjusted for the inverse-probability of treatment weights, which balanced the known covariates in the two treatment groups. The outcomes were assessed at 12 months and based on international classification of disease codes. The primary ischemic outcome consisted of all-cause death, MI, or stroke, whereas the primary combined ischemic/bleeding endpoint also included re-admission for bleeding. All outcomes were also assessed individually. As a sensitivity analysis, the outcomes were assessed in patients <80 years using the same inclusion/exclusion criteria as in the main analysis.

Summary of Results
A total of 14,008 patients ≥80 years was included, with 60% treated at discharge with clopidogrel and 40% with ticagrelor. Between 2010 and 2017, the uptake of ticagrelor increased from 0% to 72.5%. After inverse-probability of treatment weights adjustments, the baseline characteristics were similar in the treatment assignments, with a mean age of 85 years and 26% with prior MI, 22% with prior diabetes, and 31% with ST-segment elevation MI.

Figure 1: 1-Year Outcome With Ticagrelor or Clopidogrel Among Patients ≥80 and <80 Years 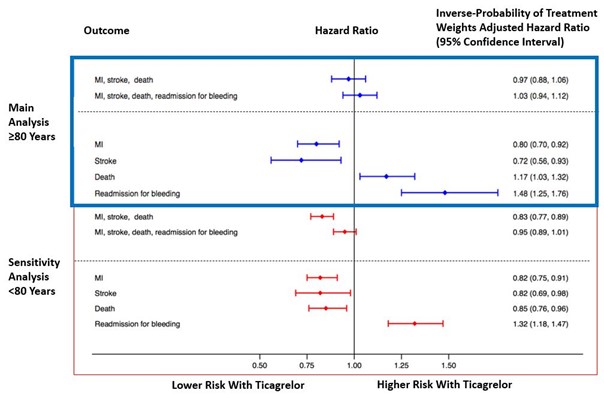 In the sensitivity analysis among patients <80 years, the results differed with a 17% lower risk of combined primary ischemic outcomes but a similar risk of combined primary ischemic/bleeding outcomes. For the individual outcomes, the use of ticagrelor compared with clopidogrel was associated with a lower risk of MI, stroke, and death (by 18%, 18%, and 15%, respectively), whereas the risk of bleeding was increased by 32%.

Practical Implications
This observational analysis indicates that the results from a randomized clinical trial may not easily be translated to certain subgroups of patients in the real world, in whom the same benefit may not always be expected.

Attempts at assessing the effect among elderly has been made previously and was also made in a post-hoc analysis from the PLATO trial.2 In this analysis, patients ≥75 years (n = 2,878) had a benefit similar to younger patients (n = 15,744), and no interaction with age was found. A possible explanation for this difference is that patients treated in the real world differ substantially from patients recruited in a clinical trial. Differences with regard to the number, type, and severity of co-morbidities and the number of concomitant medications could explain the higher risk associated with a more potent antiplatelet treatment. After all, patients who were ≥75 years in the PLATO trial represented 15% of the trial population, whereas elderly patients in the real world make up about a third of all patients with MI.

Supporting our findings of a higher risk of bleeding among elderly with a more potent antiplatelet medication compared with clopidogrel are the results from the randomized POPular Age (Randomized Comparison of Clopidogrel Versus Ticagrelor or Prasugrel in Patients of 70 years or Older With Non-ST-Elevation Acute Coronary Syndrome) trial.3 In this study, 1,002 patients who were ≥70 years and admitted with a non-ST-segment elevation MI were randomized to either a potent antiplatelet medication (95% received ticagrelor) or clopidogrel. The study found that using clopidogrel resulted in a 29% lower risk of bleeding. No difference was seen on the combined bleeding/ischemic endpoint, which the trial was underpowered to study, however.

A limitation to our study was the lack of data on the cause of death. Although we found a higher risk of death with ticagrelor versus clopidogrel in the elderly, it is unknown whether this was related to bleeding events. The results from our observational study can show only associations, and residual bias can still affect and explain the association observed. Furthermore, age is only one factor associated with a higher risk of bleeding, and, as delineated in the definition by the Academic Research Consortium for High Bleeding Risk, bleeding risk is heterogenous and related to various factors.4

In conclusion, the choice of antiplatelet medication in certain subgroups of patients with an acute coronary syndrome, such as the elderly, should be made cautiously. Further studies are needed to find the optimal antiplatelet therapy for each patient, balancing the risks of both ischemia and bleeding.

YOU ARE HERE: Home > Latest in Cardiology > Use of DAPT in ACS in the Elderly