To detrain, or not to detrain? That is the question...

The differentiation of exercise-induced cardiac remodeling (EICR) from potential cardiac pathology is often a clinical challenge. Adaptive structural changes in all four cardiac chambers brought on by intensive athletic training, plus electrocardiographic (ECG) patterns that reflect these changes, can resemble similar appearing features of early forms of various cardiomyopathies, leading to a well-appreciated 'gray zone'.1 We benefit from the generation of data detailing how and to what general degree the dynamic and static components of exercise affect EICR,1-3 plus a growing body of sport-specific cardiac reference data,4-6 to help narrow this zone of uncertainty. Despite these foundational concepts and the use of multimodality imaging to obtain as complete an assessment as possible, a gray zone often still exists in individual cases. In these instances, detraining may be considered to theoretically affect and achieve reverse athletic remodeling to help distinguish EICR from pathology.1 Given the potential negative impacts to an athlete that prescribed detraining may have, including compromising fitness and jeopardizing selection to a team, leading to a natural reluctance of a competitive athlete to follow a detraining program, it is essential to be familiar with the available data describing what detraining can and cannot achieve before recommending this intervention.

Detailed and quantitative data on the impact of detraining on cardiac structure are relatively sparse. The majority of published studies have focused on the effects of detraining on the left ventricle (LV). LV EICR is characterized by a combination of increased LV wall thickness (LVWT) and increased LV dimension.1 Several studies have shown that observed maximal LVWT in highly-trained athletes, including athletes in the National Basketball Association and National Football League, and mixed-sport Olympic level Italian athletes, is 14-15 mm, with an appreciated gray zone in athletes for LV hypertrophy (LVH) of approximately 13-15 mm.2,4,7,8 LV size, especially in elite endurance athletes, is often increased and frequently >60 mm but can reach as high as 70 mm.4,9,10 In detraining studies, for athlete groups ranging from Olympians to recreational athletes, a pattern is observed that training-related LVH will often regress back to pre-training levels within a period of weeks (beginning as early as 4 weeks), while LV dimension may only demonstrate partial regression and this regression may not be appreciated until after a period of years.11-14 In studies of short-term detraining, LVWT has been shown to regress between 8-23% in 1-3 months without a concomitant reduction in LV cavity size.12-14 In a longer-term study of endurance athletes with LV remodeling followed for an average of 5.6 years after detraining, LVWT regressed by 15% with resolution of LVH, while LV dimension only lowered by 7% and the majority of these athletes still had LV size classified as enlarged.11 Mechanisms of LVWT regression, as seen by histopathology in rats and in an MRI study of humans, appears to be a reduction in cardiomyocyte diameter and reduction in intracellular volume induced by detraining.15,16 The recognition of the degree and time course of expected reverse remodeling of the LV is essential if detraining is under consideration. Furthermore, a degree of LVH regression with detraining does not definitively exclude hypertrophic cardiomyopathy (HCM) or other form of cardiomyopathy. Athletes with gray zone LVH must still be followed longitudinally with incorporation of other clinical data including ECG, family history and genetics, and symptom burden, to help exclude the possibility that the observed LVH represents an early manifestation of a cardiomyopathy.

There is a growing appreciation and understanding of right ventricular (RV) EICR, notably in endurance athletes, where observed RV remodeling may overlap with features of cardiomyopathy, especially arrhythmogenic RV cardiomyopathy.3 Similar to the LV, endurance exercise has been shown to induce an increase in RV size and wall thickness.3,17 In addition, studies of the RV in highly-trained endurance athletes demonstrate a slight reduction in RV systolic function, some of which can be acute in the setting of ultra-endurance sport participation.18,19 Fewer studies exist that describe detraining effects on the RV. Limited evidence suggests that there can be normalization of RV systolic function and partial regression of RV enlargement with detraining.14,18,19 Pedlar et al. demonstrated in recreational athletes an 8% reduction in RV area after 8 weeks of detraining that was not appreciated at 4 weeks.14 Given the limited available data and relatively small change in RV size demonstrated with detraining, the use of detraining as a diagnostic tool to evaluate potential RV pathology is not standard of practice or part of current diagnostic algorithms.

Limited data also exist for the effect of detraining on atrial structure. Both left and right atrial enlargement is appreciated in a proportion of well-trained athletes.4,5,20 Detraining has been associated with a modest reduction in atrial size as seen by echocardiography, ranging from 8-12%, after a 4-16 week period of detraining.13,20 Given technical limitations and variability in measuring atrial volumes, and the modest reduction in atrial size observed with detraining, it is not recommended to prescribe detraining as a method to separate EICR from potential cardiac pathology in the presence of isolated atrial enlargement.

There are important complementary data that demonstrate that the effects of detraining are not limited to changes in cardiac structure, as electrophysiologic changes in trained and detrained athletes are also seen. Best appreciated in endurance athletes, paroxysmal atrial fibrillation/flutter (PAF) and ventricular ectopic beats (PVC) can be more prevalent in athletes than age-matched non-athletes.21-23 Detraining has been shown to lessen or eliminate episodes of atrial arrhythmias and lead up to an 80% reduction in PVC frequency in a period of 2-3 months.22,23 This effect of detraining for athletes with PAF can be so pronounced that the European Association for Cardiovascular Prevention and Rehabilitation (EAPC) recommended in 2006 that athletes in the early stages of PAF discontinue training for 2 months to stabilize sinus rhythm,24 though the updated EAPC recommendations in 2020 and the 2015 AHA/ACC sport participation guidelines do not advocate for detraining given advancements in catheter-based ablation therapies for these arrhythmias.25,26 In addition to PAF and PVCs, case reports of athletes with pathologic-appearing T-wave inversions (TWI) provide examples of reversal/normalization of TWI in as early as 2 weeks after detraining (Figure 1).27,28 The clinical significance of TWI in the absence of other identifiable cardiac disease remains uncertain and a short period of detraining may be considered in this occurrence. Similar to athletes with gray zone structural findings, athletes with this ECG pattern should continue to receive longitudinal evaluation to exclude the development of a cardiomyopathy.

The decision to recommend detraining for an athlete must weigh the incremental additive value to the evaluation process against the detrimental consequences that this intervention could have for the athlete. The evidence to support the regular use of detraining in the cardiac evaluation of athletes is relatively weak, but there may be a role in a limited number of cases for short-term detraining to clarify gray zone measures of LV wall thickness, or abnormal TWI in the absence of other identifiable pathology. Expanded generation of sport-specific reference data using multimodality imaging will help further limit situations where clinicians may feel compelled to resort to detraining. For endurance athletes with symptomatic PAF or PVCs, detraining may have a role in rhythm stabilization while longer-term rhythm control strategies are formulated. 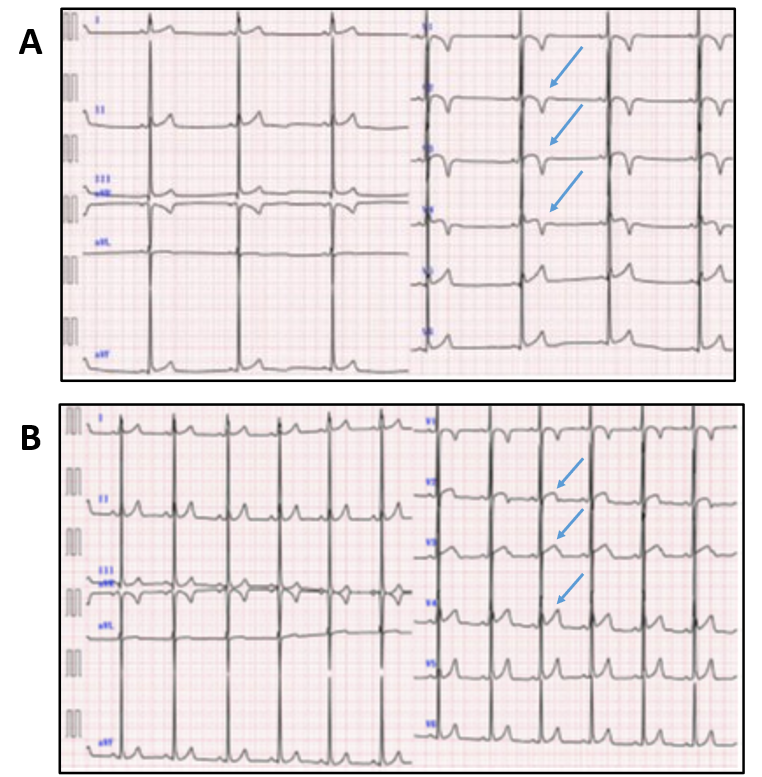 YOU ARE HERE: Home > Latest in Cardiology > Prescribed Detraining: Effects on Cardiac Structure, Cardiac Electrophysiology, and the Athlete