5-FU-Associated Coronary Vasospasm: Who is Really at Risk?

Background
5-FU is the third most common drug used for the treatment of solid malignancies, including adenocarcinomas of the breast, head, and neck and gastrointestinal tract and bladder cancer.1,2 However, it is the second most common drug associated with cardiotoxicity after anthracyclines.1 The most common reported symptom is chest pain thought to be secondary to vasospasm.1,3 The reported incidence of 5-FU-associated cardiotoxicity varies from 1% to 35% due to differences in the sample population, definitions of 5-FU-associated cardiotoxicity, and the varied formulations/administration protocols of 5-FU.4 The goal of this study was to assess the incidence, risk factors, and prognostic implications of 5-FU-associated coronary vasospasm among patients receiving 5-FU therapy at a single center.

Methods
The study conducted a retrospective analysis of all patients who received 5-FU at a single academic center from January 2009 to July 2019. Vasospasm was defined as the occurrence of a typical chest pain syndrome in the setting of 5-FU therapy, associated with either electrocardiographic changes or elevated cardiac biomarkers. Individuals were initially flagged on keyword search for 5-FU and vasospasm and recent diagnosis of myocardial infarction. The charts were then manually reviewed, and the diagnosis of vasospasm was independently adjudicated by two cardiologists. Patients with vasospasm were compared to patients without vasospasm in a 1:2 fashion. Kaplan-Meier methods and log-rank test were used to compare median overall survival and progression-free survival. Furthermore, Cox proportional hazards regression was used to calculate hazard ratios for overall mortality, cancer-related mortality, and progression of underlying cancer.

Figure 1: Study Design and Key Differences Between Patients Who Developed 5-FU-Associated Coronary Vasospasm and Those Who Did Not 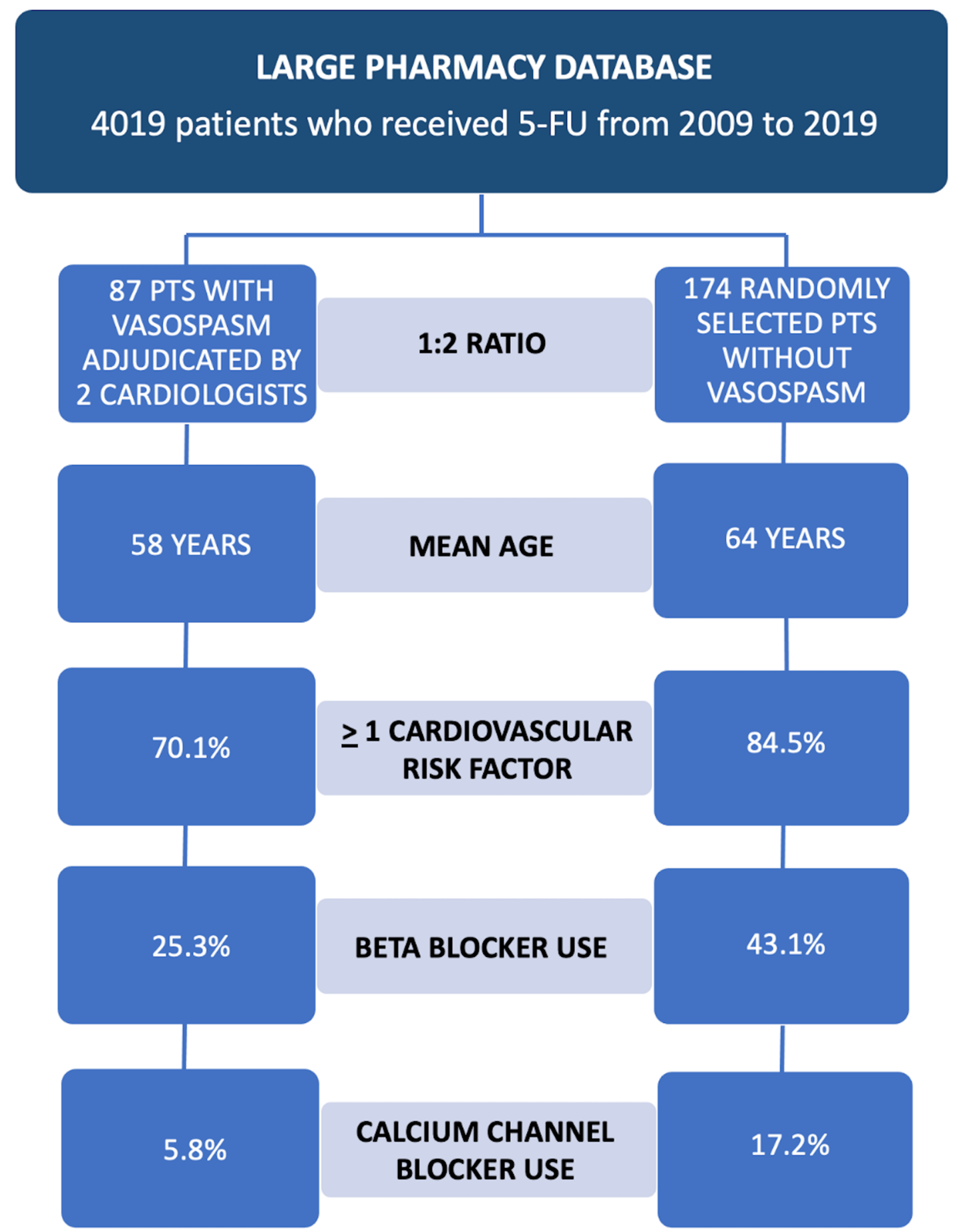 Conclusions
In the largest, single-center report of 5-FU-associated vasospasm, patients who developed vasospasm were younger, had lower rates of traditional cardiovascular risk factors, and received lower cumulative doses of 5-FU.

Perspective
We hypothesize that the lower prevalence of coronary vasospasm among patients with known cardiovascular risk factors is due to the concurrent use of cardioprotective medications such as aspirin, beta-blockers, and calcium channel blockers. However, further research is required to test this hypothesis and study whether the prophylactic use of these medications prior to rechallenging patients with known 5-FU-associated vasospasm is both safe and efficacious.

YOU ARE HERE: Home > Latest in Cardiology > 5-FU-Associated Coronary Vasospasm: Who is Really at Risk?