CASE SCENARIOS
You review your clinic schedule for the day and notice that many of your athletes may require cardiovascular medications:

As a sports cardiologist, it is imperative to be aware of appropriate treatment strategies that will not jeopardize an athlete's eligibility for competition. Specifically, knowledge of the World Anti-Doping Agency (WADA) medication list is paramount to the decision-making process, as well as ensuring that athletes are not taking performance-enhancing substances.

INTRODUCTION TO ANTI-DOPING POLICIES
Prior to 1998, there were no reliable anti-doping laboratory tests for erythropoietin (EPO), though at that time it was known to be a doping agent. A few days prior to the 1998 Tour De France, a crew member of a cycling team was arrested when customs officers found steroids and other doping paraphernalia in his car. This arrest unraveled a scandal that led to police raids, arrests, and protests. Most importantly, it led to the discovery of widespread illegal doping during the 1998 Tour De France.1 In response, the International Olympic Committee founded the World Anti-Doping Agency (WADA) in 1999 with the mission to govern performance enhancing medical procedures and drugs to maintain fairness for professional athletes. Each year WADA publishes an international "Prohibited List" which goes into effect on January first of that year.2 In the United States (US), the US Anti-Doping Agency (USADA) has similar policies to protect the integrity of sport in the US with near universal agreement between the two lists.

It is well known that hormones and anabolic steroids are prohibited in sports; however, many common cardiovascular medications are also on the WADA list. This document will focus on some of these cardiovascular medications, which happen to be frequently prescribed and are considered first line treatments in many conditions. Each league, such as the National Football League or National Basketball Association, sets its own rules and policies on enforcement and testing. The goal of WADA and USADA is to establish a standard that would apply to any team playing outside its league, such as teams playing internationally. Knowledge of the specific league rules is helpful, but more importantly, understanding which drugs are on the list and when the medications are restricted is essential when caring for athletes. The complete list can be found online.

Diuretics
Diuretics are prohibited in all sports, both during training and during competition. Sports in which competition is based on weight categories restrict use of diuretics because of their ability to artificially and temporarily lower plasma volumes; thus, placing an athlete in a different weight category could provide a competitive advantage. Diuretics are also universally banned because they can be used to rapidly reduce detection of some doping agents (e.g., anabolic steroids) prior to anti-doping testing. All diuretics including loop diuretics (furosemide, torsemide and bumetanide), thiazide diuretics, spironolactone, and vaptans are prohibited (Figure 1).3 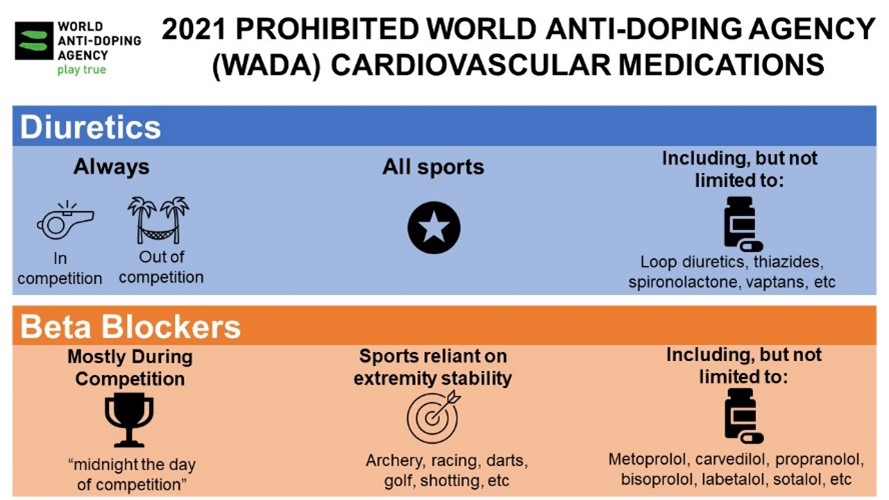 Beta Blockers
Beta blockers reduce sympathetic effects, such as increases in heart rate and blood pressure, which often are heightened during athletic competition. WADA explicitly prohibits beta blockers in sports that are reliant on stability of the extremities, such as archery, racing, billiards, darts, golf, shooting and fishing.4 All beta-blockers, such as carvedilol, metoprolol, atenolol, and propranolol, are included on the list. Beta blockers are allowed in other sports, but not in competition, as described below.

Other Medications
Anabolic steroids, growth factors (e.g., insulin-like growth factor-1, platelet-derived growth factor), certain beta-2 agonists and other hormones (e.g., aromatase inhibitors, anti-estrogens) are always prohibited. Stimulants, opioids, cannabinoids, and glucocorticoids (including prednisone) are prohibited in competition. Clonidine, while listed as a stimulant but often used for hypertension, is an exception and not prohibited.

MEDICAL TREATMENT WITHOUT COMPROMISING ELIGIBILITY
Going back to the case vignettes, with your knowledge of the WADA list and cardiovascular medications, your clinic today goes extraordinarily well. The 50-year-old triathlete is transitioned from hydrochlorothiazide to amlodipine and is appreciative that their dehydration during races should also improve. The 19-year-old soccer goalie would like to avoid invasive procedures and chooses a trial of low dose long-acting diltiazem. The 42-year-old golfer was not aware that his metoprolol was jeopardizing his eligibility and is transitioned to a long-acting nitrate for his stable angina. Finally, the 24-year-old football lineman is started on an angiotensin receptor blocker and scheduled for a sleep study.

YOU ARE HERE: Home > Latest in Cardiology > Cardiovascular Medications on the World Anti-Doping Agency List