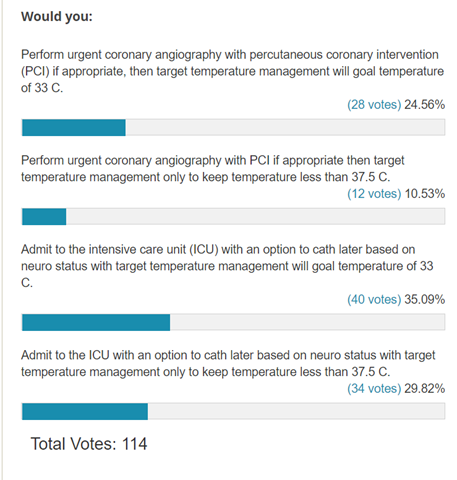 The TOMAHAWK trial is the most recent randomized trial to test whether routine immediate coronary angiography (possibly followed by revascularization) is superior to a deferred approach in resuscitated patients with out-of-hospital cardiac arrest without ST-segment elevation.1 In this trial, there was no benefit of an immediate compared to a delayed strategy for 30-day risk of all-cause mortality. The current findings are consistent with the results of the randomized COACT trial, which also showed no significant differences in clinical outcome among patients with out-of-hospital cardiac arrest between immediate and delayed coronary angiography at 90 days and at 1 year.2 Other randomized trials are ongoing; until their results are reported, routine immediate coronary angiography in resuscitated patients with out-of-hospital cardiac arrest without STEMI does not appear indicated.

Until recently, targeted temperature management was strongly recommended for neuroprotection in patients who remain comatose after resuscitation from a cardiac arrest. However, this recommendation is based on data from earlier trials that had many limitations.3,4 Both trials were small, temperature was not actively managed in the control arm making it unclear if benefits were due to a true benefit of therapeutic hypothermia (TH) or due to the harmful effects of fever in the normothermia group. In an effort to address these limitations, The Targeted Temperature Management (TTM) trial tested two different temperature targets: 33°C versus 36°C, with active temperature management in both groups;5 they found no significant difference in the composite of mortality and poor neurological outcome at 6 months. More recently, the TTM2 trial randomized patients to TH of 33°C versus targeted normothermia (goal temperature: <37.5°C).6 Again, there was no difference in overall survival or survival with severe disability. Some limitations may have affected the results. More than 90% of cardiac arrests were witnessed and approximately 80% received bystander cardiopulmonary resuscitation (CPR), with a high proportion of an initial shockable rhythm, active cooling was actually required in 46% of patients in the normothermia group to control fever, and the total time from patient contact to temperature goal took over 5 hours. Whether earlier, more rapid cooling will result in improved neuroprotection and is a goal of ongoing randomized trials.