MINOCA from A to Z

The prognosis for myocardial infarction (MI) due to coronary artery disease (CAD) has improved over the last decades due to the development of coronary care units and early revascularization strategies.1,2 However, the widespread use of highly sensitive troponin assays and coronary angiography have revealed that a substantial group of MI patients lack significant (≥50%) coronary stenoses. This group is referred to as myocardial infarction with non-obstructive coronary arteries (MINOCA).

The diagnostic criteria for MINOCA have been proposed as 1) fulfilling the universal definition for MI,3 2) having non-obstructive coronary arteries on angiography (<50% stenosis) and 3) no clinically overt specific cause for the acute presentation.4,5

The etiology of MINOCA is heterogeneous and can be divided into coronary, cardiac and extra-cardiac causes. Coronary causes are occult plaque rupture or erosion, coronary spasm, spontaneous coronary artery dissection, coronary embolization, and coronary microvascular disorders. Myocarditis, Takotsubo syndrome, cardiomyopathies, cardiac trauma, and tachyarrhythmias are accounted for as cardiac causes, and stroke, pulmonary embolism, sepsis, renal failure, and hypoxemia are examples of extra-cardiac causes. Therefore, MINOCA should be considered a working diagnosis, warranting further investigation of the underlying cause.4

The prevalence of MINOCA is around 5-10% of all MIs, and approximately one third of patients present with ST-segment elevation on the electrocardiogram (ECG). In comparison with patients with MI-CAD, MINOCA patients are more likely to be younger and female and less likely to have treated hyperlipidemia, although other cardiovascular risk factors are similar. The prognosis of MINOCA was previously perceived as excellent but has later been shown to be serious, with a 1-year all-cause mortality rate of 3.5%. Cardiac magnetic resonance (CMR) imaging has developed into an important tool for further investigation of MINOCA, due to its ability to distinguish normal myocardium from Takotsubo syndrome, cardiomyopathies, and tissue scarring due to MI or myocarditis. Overall, CMR shows myocarditis in approximately 30%, MI in 25%, Takotsubo in 20% and normal myocardium in 25% of MINOCA patients.6 The diagnostic yield has been shown to increase with early and comprehensive CMR imaging, enabling identification of reversible causes of MINOCA such as myocarditis and Takotsubo syndrome.7 The combination of CMR imaging and assessing coronary morphology with optical coherence tomography (OCT) has also been shown to determine the underlying cause of MINOCA in up to 85% of female patients. However, the study cohort was relatively small and strictly selected.8

The investigation of MINOCA needs to be undertaken at two levels. Firstly, disorders mimicking MI need to be excluded. Secondly, the underlying cause responsible for the MINOCA needs to be sought. This is of great importance since failure to identify the underlying cause may result in inadequate treatment and inappropriate information given to the patient. When coronary angiography shows non-obstructive coronary arteries in a patient with MI, the clinical context should be reviewed for overlooked diagnoses i.e., extra-cardiac causes. The coronary angiography should be scrutinized for missed obstructions or dissections, and supplementary left ventricular angiogram or echocardiography performed to reveal wall motion abnormalities, Takotsubo syndrome, or pericardial effusion. Additional CMR imaging is recommended in unclear cases and should be performed promptly, preferably within 2 weeks, to ensure identification of transient causes of MINOCA. Further coronary vascular imaging with OCT or intravascular ultrasound (IVUS), and coronary functional assessment of microvascular function as well as coronary spasm provocation, are recommended if the etiology is not yet established (Figure 1).2,4,5 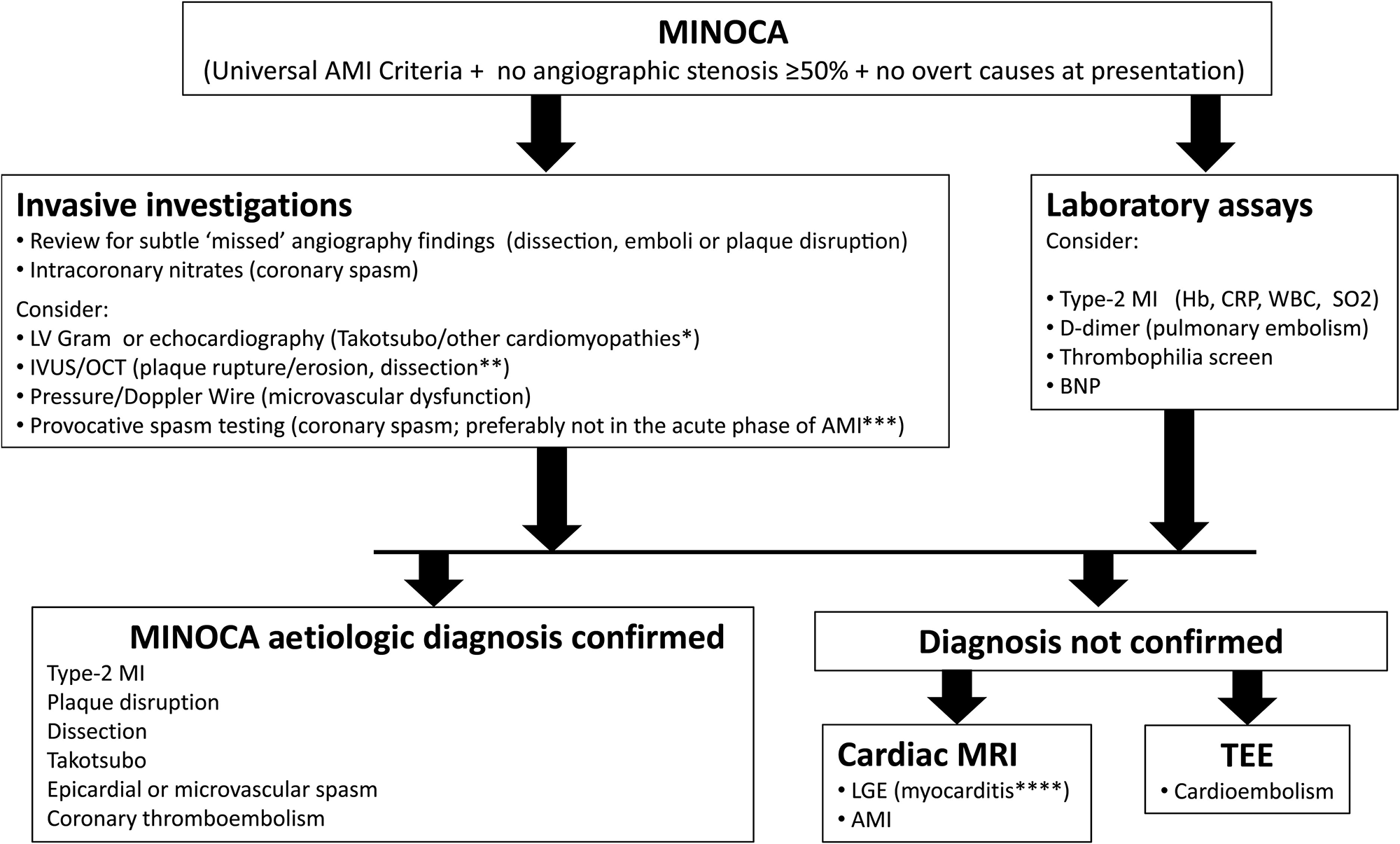 There are so far no randomized controlled trials on secondary prevention treatment for MINOCA. In a SWEDEHEART registry study of more than 9,000 MINOCA patients followed for 4 years, a propensity score model showed significantly reduced major adverse cardiovascular events (MACE) (composite of all-cause mortality, hospitalization for MI, ischemic stroke, and heart failure) in patients treated with statins or angiotensin-converting enzyme inhibitors/angiotensin receptor blockers. Treatment with β-blockers also showed a positive trend, but dual antiplatelet therapy the first year after diagnosis was neutral.9 The results of the study should however be interpreted with caution due to the retrospective observational design with uncertainty in MINOCA diagnosing and risk of residual confounding. There is an immense need for well powered, randomized, controlled trials for the treatment of MINOCA.

YOU ARE HERE: Home > Latest in Cardiology > MINOCA from A to Z