Obesity and overweight are a growing health problem leading to 2.8-4 million deaths every year, the majority relating to cardiovascular disease.1 Strong evidence shows that obesity plays an important role in arrhythmogenesis. Overweight has been associated with the amount of epicardial adipose tissue (EAT), of which the presence and volume is in turn related to atrial as well as ventricular arrhythmias.2 Although a growing body of published data documents the arrhythmogenicity of EAT, the underlying electrophysiological mechanisms are unknown. Based on reported studies, we identified important mechanisms by which EAT modulates cardiac arrhythmogenesis.

EAT refers to the visceral adipose tissue located between the myocardium and the epicardium, enclosed in the pericardial sac. Given the proximity between EAT and cardiomyocytes, the release of free fatty acids (FFAs) from adipocytes in EAT and into the plasma may act as a local and rapidly mobilizable cardiac energy supply (Figure 1). 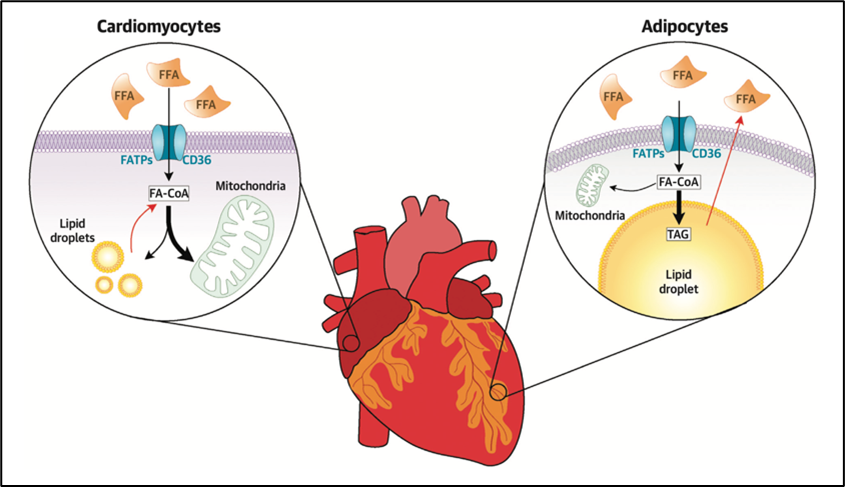 In case of excess intracellular FFAs, the latter can be stored in myocardial cytosolic lipid droplets (LDs).3 Defects in LD formation or exceeding the LD capacity may be linked to an increased risk of arrhythmias.4 Indeed, although the heart preferentially uses lipids as metabolic substrate, lipid overload is toxic, leading to calcium dysregulation, and increased reactive oxygen species (ROS) production in the cardiomyocyte. Both calcium dysregulations and ROS increase the risk of arrhythmias based on the following mechanisms: (1) cytosolic calcium overload and spontaneous release of calcium could lead to delayed afterdepolarizations; (2) ROS can induce early afterdepolarizations and alter electrical coupling between cardiomyocytes, resulting in conduction slowing. Early and delayed afterdepolarizations facilitate triggered activity, whereas conduction slowing facilitates re-entry.

2. Structural Crosstalk Between EAT and Myocardium

Adipocyte infiltration into the myocardium separates cardiomyocytes from each other and creates an anatomical barrier, especially when fibrosis is induced (fibro-fatty infiltrations), forcing the electrical impulse to follow a "zigzag" path (Figure 2) similar to the observations in infarct scar tissue.2 In patients with coronary artery disease, fibro-fatty infiltrations have been associated with conduction delay and electrogram fractionation, increased fibrosis, and lateralization of connexin40, facilitating re-entry.5 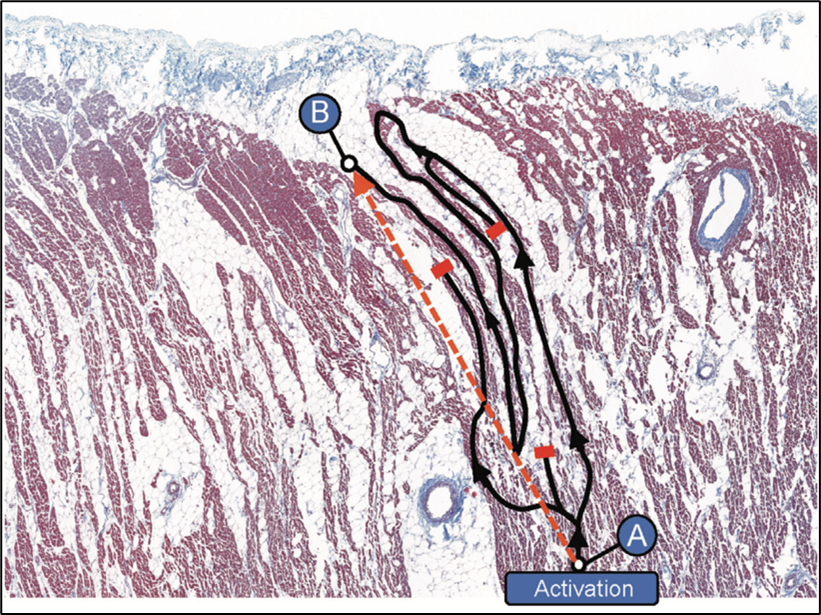 Electrical coupling between EAT cells and cardiomyocytes can facilitate arrhythmias

Adipocytes express gap junctional channel proteins such as Cx43, which are also highly expressed in cardiomyocytes. Whether adipocytes in EAT can electrically couple to cardiomyocytes is unknown. If so, electrical coupling between cardiomyocytes and adipocytes in EAT would result in respectively a depolarization and hyperpolarization of their resting membrane. Depending on the level of cardiac depolarization, its electrophysiological effect can range from increased excitability to (extreme) slowing of conduction or inexcitability (Figure 3). So far, no direct proof of cardiomyocyte-adipocyte coupling has been shown. Looking at studies investigating electrical coupling between cardiomyocyte and (myo)fibroblasts, which have similar membrane potentials as adipocytes, we could expect changes in action potential (AP) shapes (e.g., lower AP plateau levels and shortening of AP duration) and abnormal automaticity. However, further research is needed to understand whether intercellular coupling between EAT cells and cardiomyocytes can influence arrhythmogenicity.

3. Paracrine Crosstalk Between EAT and Myocardium

Cells communicate with each other through signaling molecules, including a variety of soluble factors (growth factors, cytokines, and bioactive lipids), some transported by extracellular vesicles (EVs) that carry various cargo (proteins, lipids, and signaling molecules). Indeed, adipose tissue is recognized as an endocrine organ secreting a large number of cytokines, growth factors, and hormones, known as "adipokines." Studies that have focused on the paracrine effects of EAT secretome on cardiac tissue are methodologically diverse leading to variable results.

Conclusion
In summary, the key mechanisms of arrhythmogenicity of EAT are:

Changes in APD (heterogeneity) and conduction slowing facilitate re-entry. Alterations in calcium dynamics can, besides facilitating re-entry via APD prolongation, also facilitate triggered activity by induction of early and delayed afterdepolarization. EAT is a potential target for prevention of cardiac remodelling and arrhythmias.

Translational Perspective
Several studies have reported a positive association between EAT volume and the duration as well as fragmentation and dispersion of both the P-wave and QRS-complex on the electrocardiogram (ECG). These ECG features reflect atrial and ventricular conduction delay and anisotropic, heterogeneous impulse propagation, respectively. We provide several mechanisms of crosstalk between cardiomyocytes and adipocytes that explain the increased risk of cardiac arrhythmias in individuals with increased EAT. 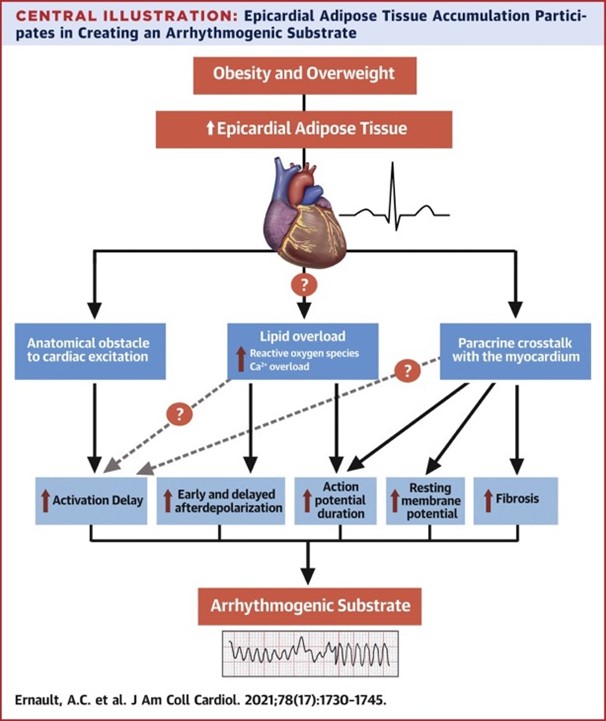 YOU ARE HERE: Home > Latest in Cardiology > Modulation of Cardiac Arrhythmogenesis by Epicardial Adipose Tissue