In our recent poll, we asked respondents the most important factor they consider when deciding whether to perform tricuspid annuloplasty at the time of mitral valve repair. While all factors received at least one vote and should be taken into consideration, the overwhelming majority (82.92%) chose: "Whether the patient has tricuspid valve dilation ≥40mm" (45.12%) or "The patient's grade of tricuspid valve regurgitation" (37.8%). 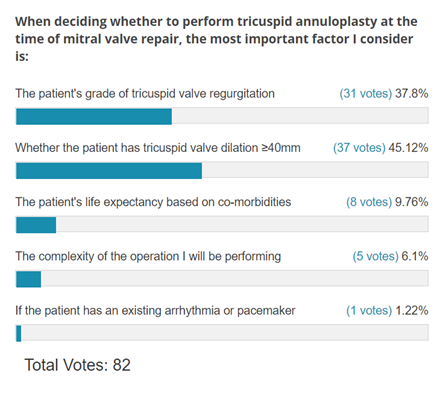 In Gammie et al.'s recent study for the Cardiothoracic Surgical Trials Network (CTSN) Investigators, 401 patients with moderate tricuspid regurgitation or annular dilation (≥40mm) undergoing mitral surgery were randomized to receive concomitant annuloplasty or not. The primary endpoints were reoperation for tricuspid regurgitation, progression of tricuspid regurgitation (by two grades or severe regurgitation), or death.1 The endpoints were less often met in the concomitant valve surgery versus mitral valve surgery alone group (3.9% vs. 10.2%, P=0.02); however, the multivalve surgery group had higher permanent pacemaker implantation (14.1% vs. 2.5%, rate ratio 5.75).1,2 This would make tricuspid annuloplasty more appealing in a mitral repair patient who already has/needs a pacemaker or who would receive benefit due to a predicted longer life expectancy. One should also consider the anticipated bypass time of the operation being performed, as tricuspid annuloplasty will inevitably add to procedure time.

Historically, surgeons have shied away from treatment of functional tricuspid regurgitation during mitral valve surgery due to associated incremental mortality, but new data has shown us that while there may be added morbidity, there is not necessarily increased mortality. In Badhwar et al.'s study, 62,118 patients undergoing mitral valve repair/replacement were analyzed with/without tricuspid valve repair (95% with annuloplasty). They found an increase in permanent pacemaker rates (5.4% vs. 14.7%) and risk-adjusted morbidity (Odds Ratio 1.36), but not risk-adjusted mortality (Odds Ratio 0.99) in the tricuspid repair group.3

Data have led to societal recommendation changes, so now concomitant tricuspid valve repair is a Class IIa recommendation by the European Society of Cardiology (ESC) with moderate regurgitation and a ≥40mm annulus and a Class II indication by the 2014 American College of Cardiology (ACC)/American Heart Association (AHA) guideline update at the time of left-sided surgery with a dilated annulus or prior evidence of right-sided heart failure (with all levels of regurgitation).3-5 Because remodeling of the tricuspid valve can occur over time with left-sided pressure/volume overload despite mitral repair,3 the trend should currently favor concomitant tricuspid annuloplasty.

YOU ARE HERE: Home > Latest in Cardiology > Poll Results: Decision-Making For Concomitant Tricuspid Repair in Patients with Degenerative Mitral Regurgitation