POAF represents the most frequent complication in patients undergoing cardiac surgery,1 with an estimated incidence ranging from 19% to 30%.2-4 Rather than acting as an innocent bystander, its occurrence has been associated with major adverse outcomes, including higher rates of mortality, stroke, heart failure, hospitalizations and costs.3,5 Circumstantial evidence of an association between POAF and postoperative pericardial effusion initially came from three observational studies conducted between 1980 and 1990.6-8 These preliminary findings were subsequently confirmed in a prospective echocardiographic series of 150 cardiac surgical patients by Ikäheimo and colleagues who reported a significantly higher incidence of postoperative atrial arrhythmias among patients undergoing cardiac surgery who developed postoperative pericardial effusion (27% vs. 11% in patients with no pericardial effusion; p<0.05).9

Pericardial Effusion, Inflammation and POAF: What Do We Know?

An increasing amount of evidence suggests that shed mediastinal blood within the pericardial space might have a pivotal role in the development of a highly pro-oxidant and proinflammatory milieu that can trigger POAF through breakdown products, activation of the coagulation cascade, and oxidative burst.4 Such observations have also been indirectly supported by a number of studies showing that surgical drainage of the pericardium in the postoperative period could reduce POAF incidence.10,11

Three factors seem to act as main drivers in the development of such procoagulant and proinflammatory environment within the pericardium: cardiopulmonary bypass, operative trauma, and hemolysis. The first two operate in combination, prompting local recruitment and activation of neutrophils. Hemolysis occurs postoperatively, causing the release of cell-free hemoglobin, which is quickly oxidized to methemoglobin, ultimately recruiting neutrophils into the pericardial space from the surrounding vasculature (Figure 1). Oxidative stress by reactive oxygen species generated by activated neutrophils and leukocytes leads to lipid peroxidation that damages the left atrial surface and peri-atrial epicardial fat pads, eventually triggering POAF.4 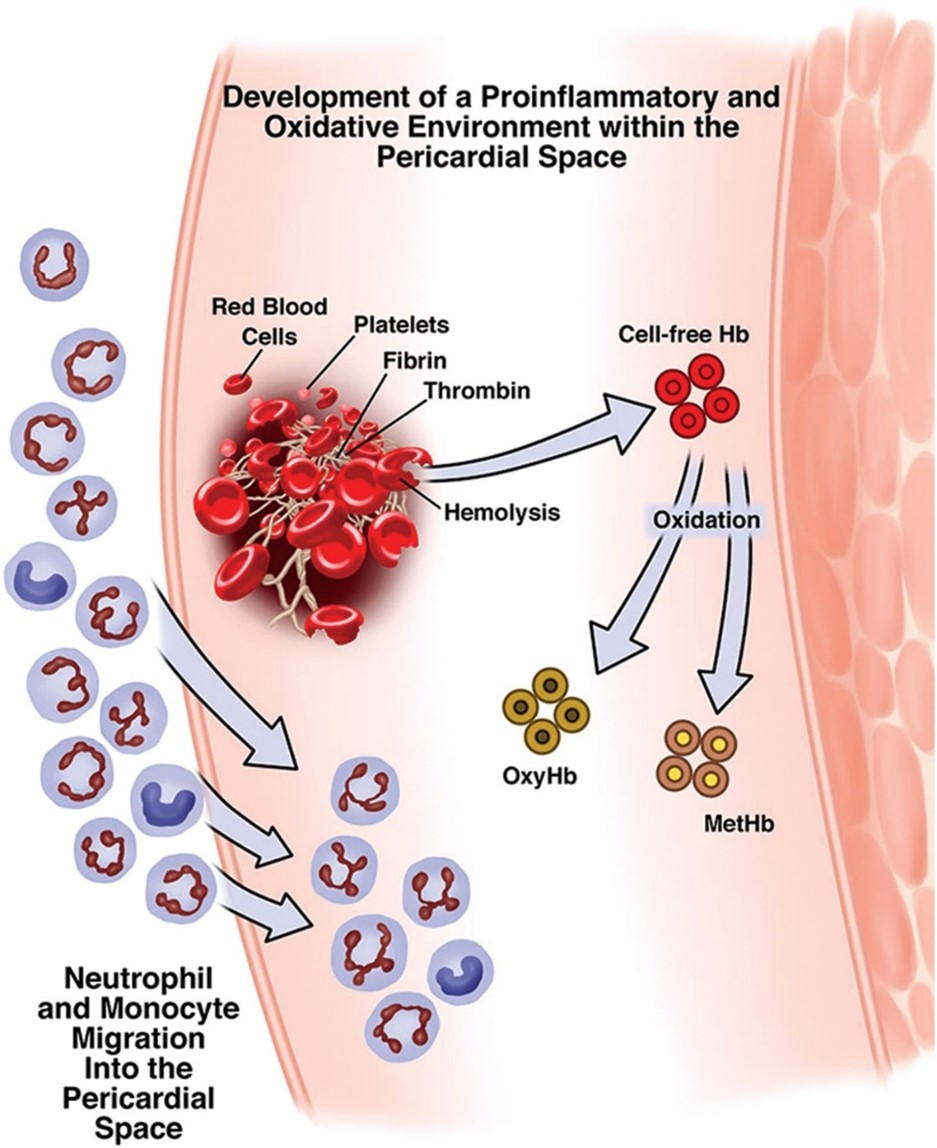 Strategies to prevent shed mediastinal blood from accumulating into the pericardial space, either through placement of additional chest tubes or posterior pericardiotomy, have therefore been considered to reduce POAF incidence.

Posterior Pericardiotomy for Prevention of POAF 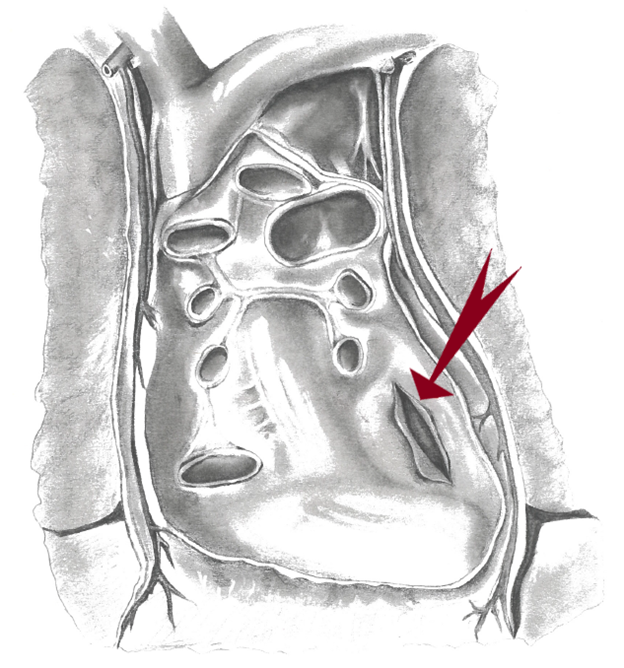 Following these encouraging results, several RCTs have tested the use of posterior pericardiotomy for POAF prevention (mainly in the setting of coronary artery bypass surgery), with the majority reporting a significant reduction of POAF in patients receiving posterior pericardiotomy. These findings have been corroborated by a meta-analysis including 3,425 cardiac surgical patients, which showed that surgical drainage of the posterior pericardium was associated with a reduction of the odds of POAF by 58% (p<0.001).10 However, the methodologic quality of the available trials was generally medium-low, and many were also statistically underpowered. 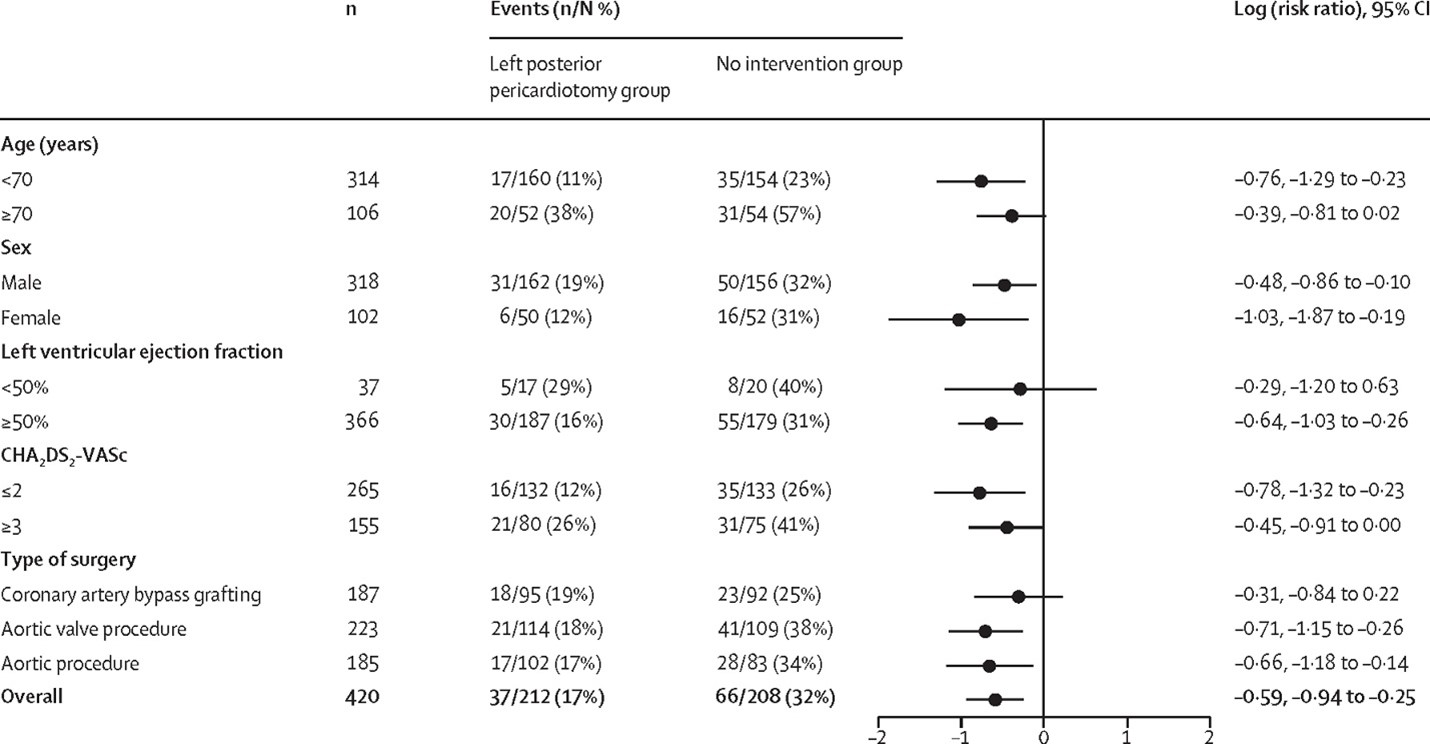 YOU ARE HERE: Home > Latest in Cardiology > The Role of the Posterior Left Pericardiotomy in Reducing Pericardial Effusion and Postoperative Atrial Fibrillation After Cardiac Surgery