Postoperative Atrial Fibrillation: What It Is and Why It Matters
Postoperative atrial fibrillation (POAF) has an estimated incidence of 19-30%,1 making it the most frequent complication in cardiac surgery patients.2 At the systems level, POAF is associated with prolonged hospitalization and increased hospital costs.1 At the patient level, POAF is associated with major adverse outcomes including higher rates of postoperative mortality, stroke, heart failure, and renal failure.1,3

The term POAF generally refers to patients with new-onset atrial fibrillation (AF) occurring during the postoperative hospitalization. However, different expert societies have varying criteria for POAF, which may lead to over- or under-diagnosis, mismanagement, and subsequent increased morbidity.4

The most likely timing of onset of POAF is within 48 hours postoperatively, although it can occur anytime within 7 days of surgery.5 The risk of recurrence after leaving the hospital has been reported to be as high as 28% in the first month post-discharge.6

Accepted Mechanisms of POAF
Despite being a postoperative phenomenon, predisposition to developing POAF is present pre-operatively.7 Patients with structural heart disease may be more susceptible to developing POAF, as changes secondary to valvular disease may create re-entry circuits that trigger arrhythmia.8 Fibrosis or fatty infiltration of myocytes, or connexin remodeling with gap junctional modification, can lead to conduction abnormalities. In addition, chronic stress on the atrial substrate caused by numerous other conditions is associated with POAF (Figure 1).5 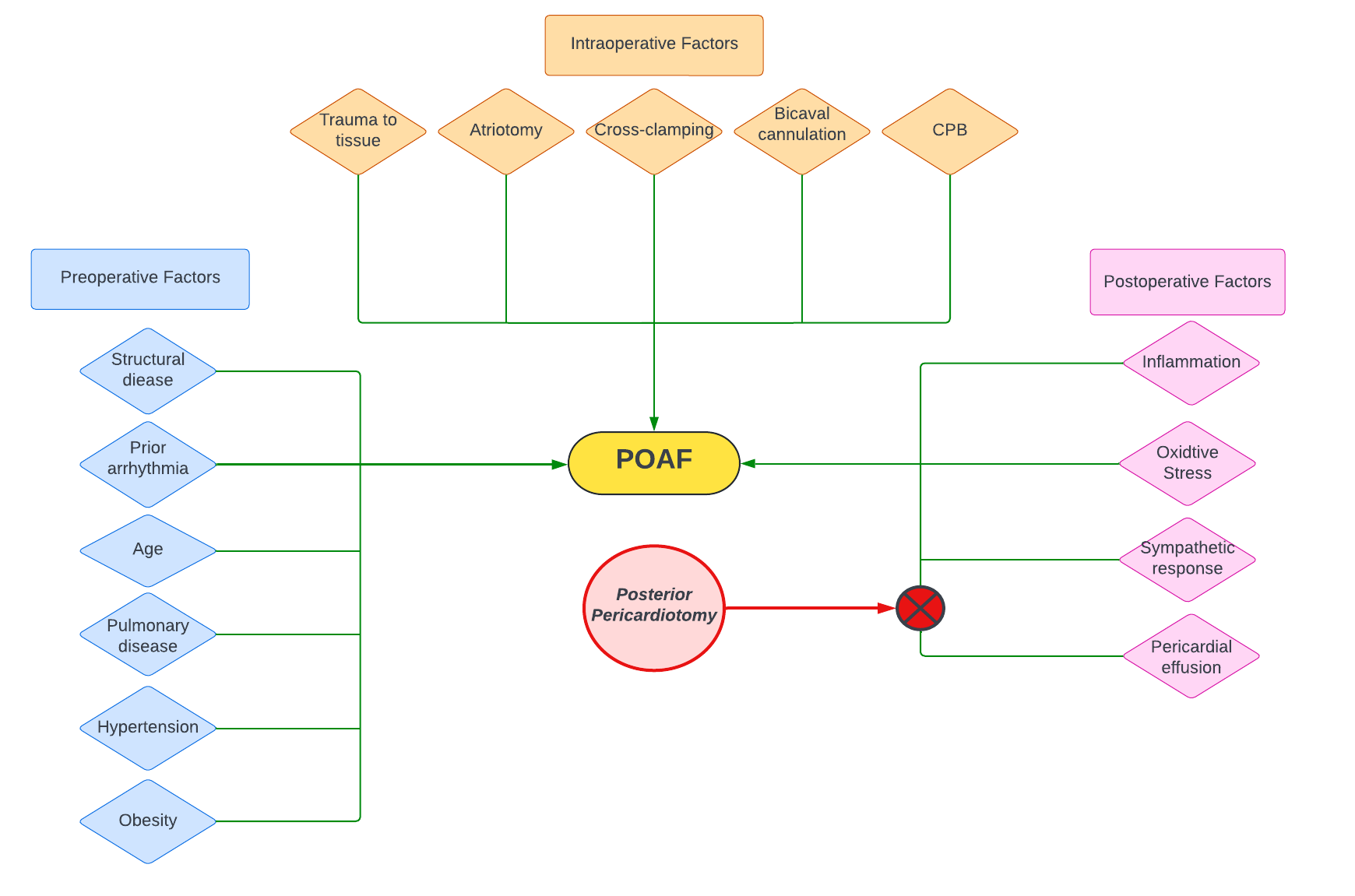 Intraoperatively, surgical trauma caused by direct injury to the heart or cardiopulmonary bypass (CPB) may lead to remodeling of the atria.9 Bicaval cannulation, duration of CPB, and left ventricular venting via the pulmonary veins have all been associated with a higher risk of POAF (Figure 1).5

The postoperative inflammatory response can lead to aberrant conduction, re-entry arrhythmias, and POAF.10,11 Prior studies have demonstrated a correlation between peak levels of postoperative inflammatory markers and the onset of POAF.12 Corticosteroids have been used in an attempt to reduce the incidence of POAF with inconclusive results. Elevated sympathetic tone may lead to increased heart rate and triggered atrial activity; correspondingly, perioperative beta blockade as well as class III antiarrhythmic use have been demonstrated to result in a lower incidence of POAF (Figure 1).13,14

Pericardial Effusion: Role in POAF
Despite the aforementioned medical management, the overall incidence of POAF has remained high.5 This has generated a hunt for other treatable etiopathologies of POAF.

The presence of mediastinal fluid, regardless of the amount, activates platelets and the coagulation cascade, propagating the inflammatory response via neutrophil migration and increased cytokine release (IL-6, IL-8, IL-1).7,17 As discussed above, surgical trauma itself contributes to inflammation and neutrophil recruitment as well.

Neutrophils produce peroxide, which creates reactive oxygen species; reactive oxygen species are also produced secondary to ischemia-reperfusion injury. The oxidative stress pathway ends with lipid peroxidation of the pericardial fat pads and the atria, engendering POAF.18 Pericardial blood clot hemolysis yields cell-free hemoglobin, which is oxidized to methemoglobin; in turn, methemoglobin reacts with peroxide from neutrophils, which is another path to lipid peroxidation.18,19 Overall, the combination of post-surgical blood products, pericardial and atrial trauma, and oxidative stress secondary to pericardial effusion create a potent pro-inflammatory, pro-arrhythmogenic milieu around the heart that may promote POAF.

Intraoperative Drainage of the Pericardium: A Pre-Emptive Strike
The link between pericardial effusion and POAF is strengthened by studies that have shown a decrease in POAF with pericardial drainage. A propensity-matched analysis of 697 cardiac surgery patients demonstrated that active clearance of pericardial blood products led to significantly lower rates of POAF,20 while another study showed that impaired pericardial drainage was associated with a significantly higher incidence of POAF.21

Left posterior pericardiotomy was described by Mulay et al.22 and is a straightforward procedure that creates a 4-5cm longitudinal incision of the posterior pericardium to facilitate drainage of blood products into the left pleural space (Figure 2). 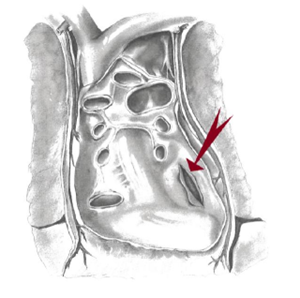 Future Directions
Posterior pericardiotomy is a straightforward procedure that can be performed at time of the index cardiac surgery and may prevent POAF and its negative sequelae (see Figure 1 for graphical summary). However, our trial, while rigorous, was a single-center study. A multi-center study with numerous operators and larger number of subjects will be needed to assure both the efficacy of posterior pericardiotomy and its overall safety prior to its wide adoption as a prophylactic measure against POAF.

YOU ARE HERE: Home > Latest in Cardiology > Pericardial Effusion and Postoperative Atrial Fibrillation