Post ablation pericarditis is a type of post cardiac injury syndrome which results from an inflammatory reaction to the myo-pericardial damage from both radiofrequency catheter as well as cryoablation for atrial and less so ventricular arrhythmias.1 The diagnosis is confirmed, in keeping with the European Society of Cardiology (ESC) guidelines, when two out of the four criteria meet: chest pain improved by sitting up or leaning forward, pericardial friction rub, new diffuse ST-segment elevation, or PR-segment depression on electrocardiogram (ECG), and new or worsening pericardial effusion.2 Available literature describing post ablation pericarditis is limited to retrospective studies and a small number of case reports and series. Therefore, we aim to review the pathophysiology, role of multimodality imaging, established literature, and treatment methods for this specific subset of patient cohort.

Myopericarditis is an uncommon complication post ablation. Radiofrequency (RF), cryoablation, and laser ablation are some of the energy sources utilized for atrial fibrillation (AF) ablation. RF generates a lesion by heat which is transmitted via the tip of a catheter with or without saline irrigation.3 Left atrial balloon is used for cryoablation which freezes each pulmonary vein separately.4 Further, RF ablation technique for ventricular tachycardia (VT) entails either an endocardial or an epicardial approach. Pericardial complications like hemopericardium and symptomatic pericarditis can be witnessed in epicardial approach where an epidural needle is introduced into the pericardial space under fluoroscopic imaging.5

Multimodality imaging plays a crucial role in diagnosis and management of pericardial diseases including post ablation pericarditis. It is often performed to confirm a clinical suspicion and should follow a comprehensive history and physical examination, laboratory investigations, and ECG. Transthoracic echocardiography (TTE) is usually the first imaging modality performed. The cardinal findings of acute pericarditis include the presence of pericardial effusion with or without tamponade, increased pericardial brightness and pericardial thickening.8 When patients present with features of constrictive physiology, the TTE findings include inferior vena cava plethora (a sign of increased right atrial pressure), moderate biatrial enlargement, sudden restriction of ventricular diastolic filling, early diastolic septal bounce, or respirophasic interventricular septal shift. On computed tomography (CT) scan, noncalcified pericardial thickening with effusion suggests acute pericarditis. Additionally, CT scan is an excellent modality for pericardial thickness evaluation in cases where patients present with constrictive pericarditis after ablation. It is also very accurate for detection of pericardial calcification.8 Cardiac magnetic resonance (CMR) is another integral modality which compliments the TTE and CT findings. It provides an accurate anatomic delineation from adjacent structures. The important features of acute pericardial inflammation after ablation on CMR are enhancement of the thickened pericardium or late gadolinium enhancement. Considerable pericardial tissue signal on T2 weighted images (T2WI) corresponding to neovascularization, edema and/or granulation tissue. Features of constriction include the changes like TTE – abrupt halt of diastolic filling, septal bounce, respirophasic shift of interventricular septum, and pericardial thickening. CMR images of different cases of acute pericarditis after ablation procedure for arrhythmias like AF, premature ventricular contraction (PVC) and VT are depicted in Figures 1, 2 and 3, respectively. 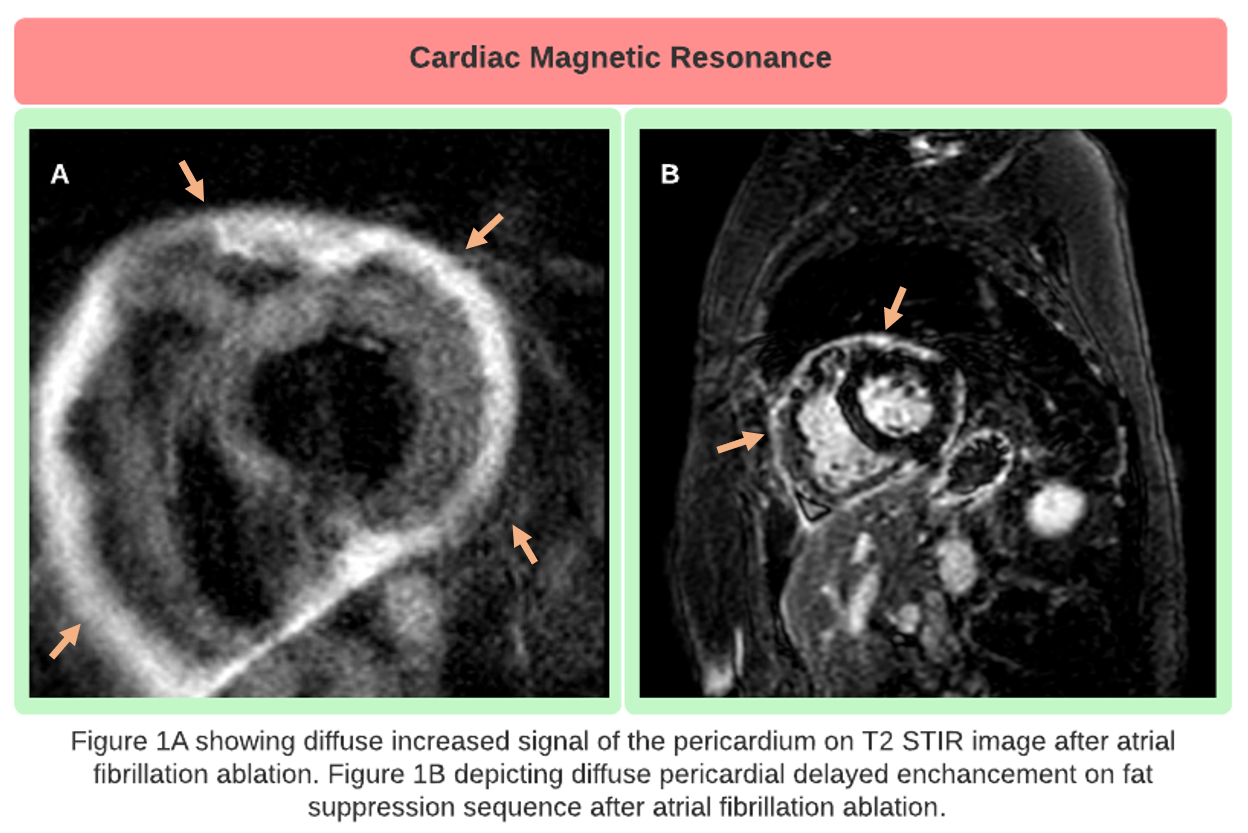 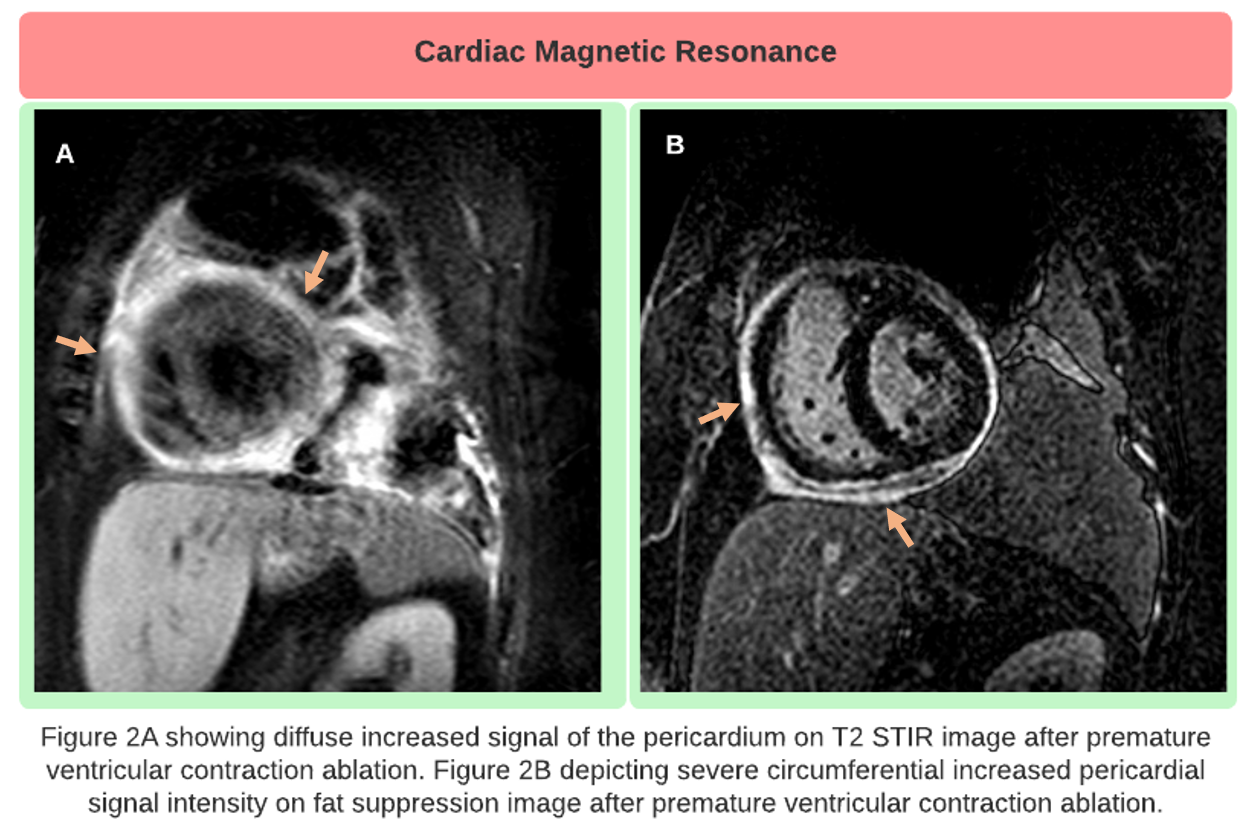 Literature on post ablation pericarditis is sporadic. Nakhla et al., in their single center analysis, demonstrated that 10.2% of patients had suspected acute pericarditis after catheter ablation for AF. Of note, the study definition of pericarditis was post ablation pericardial chest pain treated with anti-inflammatories. Younger patients, more likely presenting with paroxysmal AF, appeared to be most at risk.9 Using a nationwide database, Darmoch et al. showed that 0.8% of patients developed acute pericarditis who underwent AF ablation. The trends of acute pericarditis after AF ablation showed fluctuations but more inclined towards reduction. Interestingly, multivariate analysis reflected female sex and obesity were associated with higher risk.10 In another retrospective study conducted by Mugnai et al., 4% of patients developed acute pericarditis after cryoballoon ablation of AF. It was depicted to be associated with the number of cryoapplications and total freezing time. There was no difference witnessed in AF recurrence rates between patients who developed pericarditis after cryoballoon ablation versus those who did not.7 In a multi-center study conducted by Sacher et al., 121 out of 913 VT ablations underwent epicardial ablation. Acute intrapericardial bleeding was witnessed in 4.5% cases and delayed (>48 hours) complications like major pericardial inflammation and cardiac tamponade were seen in 0.6% and 0.6% cases, respectively.11 Bella et al. reported that 3.7% cases developed cardiac tamponade with combined endo-epicardial VT ablation.12 Additionally, Tung et al. demonstrated a 6.7% rate of pericardial bleeding among 95 patients who underwent epicardial ablation for VT.13 Some case reports have also been established showing the development of acute as well as constrictive pericarditis after ablation for various arrhythmias like AF, PVC, VT, Wolff-Parkinson-White syndrome, and atrioventricular nodal reentrant tachycardia.6,14-17

The management of post ablation pericarditis is usually similar to any other case of pericarditis. The goal of treatment is to minimize the pericardial inflammation. There are many treatment options available like nonsteroidal anti-inflammatory drugs (NSAIDs), colchicine, steroids and steroid sparing agents like azathioprine, methotrexate, and intravenous immunoglobulins.18 NSAIDs remain the mainstay of management for acute pericarditis.19 Oral ibuprofen 600 to 800 mg every 8 hours or oral indomethacin 50 mg every 8 hours are the recommended initial choices. Aspirin 2-4 g/day is recommended in patients with concomitant cardiovascular comorbidities.20 Colchicine is another first line agent used concomitantly with NSAIDs with a recommended dose of 0.6 mg twice daily.2,21 Corticosteroids like prednisone are indicated when the patient is either intolerant or there is any contraindication or incomplete or no symptom resolution with NSAIDs/colchicine.2 Low doses of prednisone (0.2-0.5 mg/kg/day) are recommended with a slow taper which, in turn, should be introduced only with complete resolution of symptoms and normal CRP levels.22 Immunosuppressive medications like azathioprine, methotrexate, and hydroxychloroquine can also be used but more commonly in cases of recurrent pericarditis after ablation. Interleukin-1 blockers, like anakinra and rilonacept have gained momentum recently by showing excellent efficacy. Anakinra has shown to reduce recurrence of pericarditis in colchicine-resistant and steroid dependent pericarditis.23 Recently, RHAPSODY trial showed an outstanding result of rilonacept in treating recurrent pericarditis which eventually got US Food and Drug Administration approval.24 It can also be used as a steroid sparing monotherapy and helps taper off all the other anti-inflammatory agents. On failure of optimal medical management, patients can also be considered for surgical pericardiectomy as a last resort.2

In conclusion, post ablation pericarditis has been observed in clinical settings but is poorly reported. Patients should be meticulously monitored after ablation procedure as early management of acute pericarditis is crucial to prevent complications like recurrence and constriction.

YOU ARE HERE: Home > Latest in Cardiology > Post Ablation Pericarditis