There is increasing evidence that early intervention with rhythm control in atrial fibrillation (AF), most prominently with catheter ablation, can reduce not only the burden of arrhythmia but associated adverse outcomes such as stroke, heart failure (HF) and even mortality.1,2 Pulsed field ablation (PFA) is a non-thermal technology which has the potential to revolutionize the ablation of AF and further drive strategies in patient care. PFA energy's inherent selectivity for myocardium combined with its relative sparing of tissue architecture appears to result in reduced risks of phrenic nerve injury, pulmonary vein stenosis and atrial-esophageal fistula when compared to the indiscriminate tissue injury provided by thermal sources.3-6 Indeed, in early clinical and pre-clinical data it offers comparable if not superior efficacy to conventional techniques with improved safety.7-9

While the promise of PFA has been realized in small studies with experienced operators, the safety and efficacy profile of this technology remains to be proven in a larger scale. The MANIFEST-PF survey aims to summarize a "real-world" experience of PFA in commercial practice after the regulatory approval of the single-shot, pentaspline PFA catheter and compatible generator (Farapulse PFA System, Boston Scientific).10

A survey was sent to all 24 centers in nine European Union countries with experience in PFA with a 100% response rate. Each center contributed from their respective institutional-level patient databases to culminate in a total of 1,758 patients undergoing ablation between March 2021 and January 2022. Patients treated included a mix of paroxysmal (57.5%), persistent (35.2%), or long-standing persistent AF (2.9%) with the majority of procedures (93.5%) being first-time ablations.

Most procedures (82.1%) were performed under deep sedation without endotracheal intubation with (84.9%) spending at least one night in the hospital. The mean procedural time was 65 minutes with an acute vein isolation rate of 99.9% (range 98.9-100%). The rates of major complications were 1.6% consisting mostly of pericardial tamponade and stroke with one stroke resulting in mortality (Table 1). Minor complications reached 3.86% and were mainly related to vascular access. Three "unusual adverse events" were reported including one case of coronary artery spasm, a second involving hemoptysis and a third with a chronic cough which persisted for 6 weeks post procedure. There were no reported cases atrial-esophageal fistulas, pulmonary vein stenosis or persistent phrenic nerve injuries.

MANIFEST-PF suggests that the safety and remarkable acute procedural success demonstrated in the early clinical studies can be achieved across a range of centers and operators in real-world practice. Complications in this series were rare and largely unrelated to the ablative modality employed (vascular access, pericardial effusion).

There are several inherent limitations in this analysis, the most notable of which is that it is a retrospective survey relying on the individual collection of data from each respective center raising potential for under-reporting. Secondly, while rates of acute vein isolation approach 100%, this study offers no insight into the long term success in both durable vein isolation and recurrence of atrial arrhythmias. Finally, the incidence of severe complications attributed to thermal energy (atrial-esophageal fistula, phrenic nerve palsy, pulmonary valve stenosis) are rare and similar complications may not be realized even with the number of patients assessed in this study.11 Additional analyses featuring longer follow up and larger patient populations remain necessary to further validate the success and safety of PF ablation. 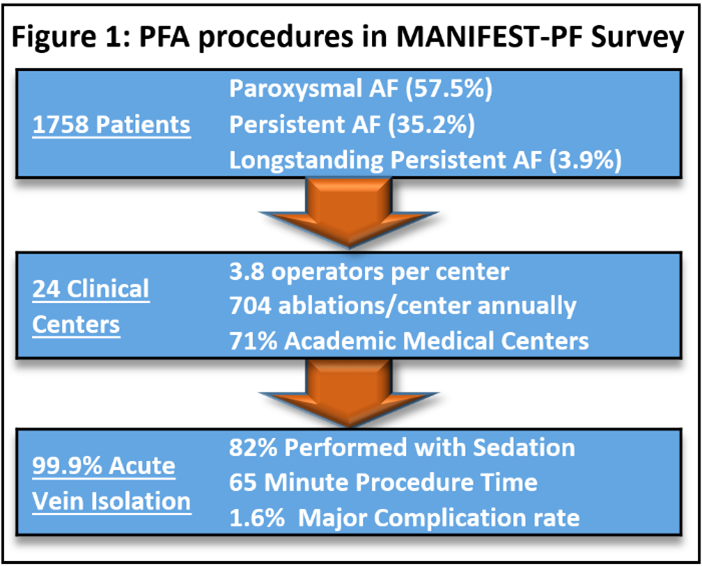 YOU ARE HERE: Home > Latest in Cardiology > Findings of the MANIFEST PF Survey: Real World Experience With Pulsed Field Ablation