A 69-year-old female with a past medical history of severe aortic stenosis, heart failure with preserved ejection fraction and paroxysmal atrial fibrillation on rivaroxaban and diltiazem presented to the emergency department with shortness of breath and lightheadedness. Her vital signs were significant for hypotension. Cardiovascular examination revealed muffled heart sounds and an elevated jugular venous pressure. An electrocardiogram was done which showed atrial fibrillation with rapid ventricular response. The echocardiogram revealed a large pericardial effusion (Image 1 and Image 2) and plethora of the inferior vena cava (Image 3). M mode showed diastolic collapse of the right ventricle. Doppler interrogation of mitral inflow showed >30% change in velocity with respiration. Pericardiocentesis was performed with removal of 650 milliliters of bloody fluid. Her symptoms resolved. Analysis of the pericardial fluid revealed 1.5 million RBCs/μl and 5700 WBCs/μl with 74% neutrophils, 16% lymphocytes and 10% monocytes. Cytology was negative for malignant cells. Repeat echocardiogram showed resolution of the pericardial fluid. Of note, she did not have a prior history of a pericarditis or previous cardiac procedure. 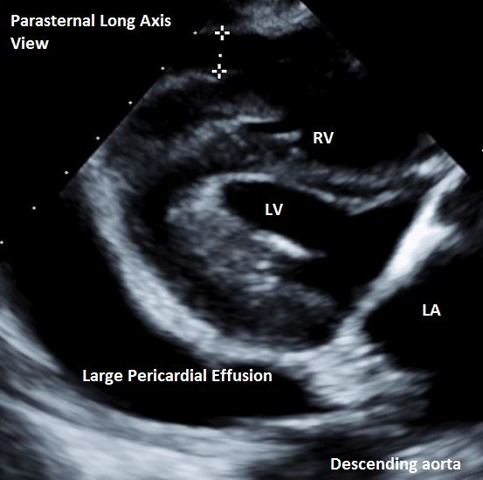 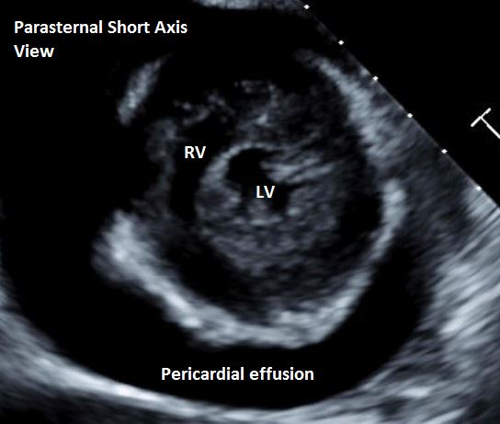 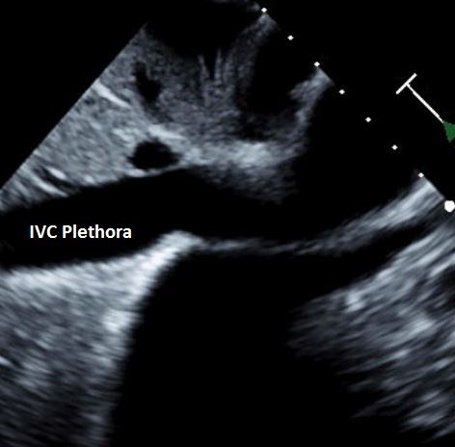 Which of the following predisposed the patient to develop a hemorrhagic pericardial effusion?

The correct answer is: D. Receiving diltiazem along with rivaroxaban

An important point of caution is that in cardiac tamponade that occurs as a complication of aortic dissection, pericardiocentesis may precipitate hemodynamic collapse and death. In such cases, pericardiocentesis should be avoided and the patient should be transferred to the operating room as urgently as possible for surgical repair of the aorta and intraoperative drainage of the hemopericardium. Urgent pericardiocentesis may still be indicated, however, if the blood pressure is too low and vital organ perfusion is compromised, but even in that case, aspiration of only a small amount of pericardial fluid is recommended, just enough to raise the patient's blood pressure to the lowest acceptable value. This minimizes the chances of precipitating a rapid increase in blood pressure, which could induce further extension of the dissection or could also cause the hemorrhage to recur. Hence, in a case of hemopericardium, it is very important to rule out aortic dissection, before making the decision to perform pericardiocentesis.5 In the described case, aortic dissection was ruled out by echocardiography and the hemopericardium was thought to be rivaroxaban-induced in the setting of concurrent use of diltiazem.

Rivaroxaban is an oral direct Factor Xa inhibitor widely used for stroke prevention in patients with non-valvular atrial fibrillation. Unlike warfarin, it is convenient to use, since monitoring its blood level is not required. However, hemorrhage is still one of its major side effects, especially, when combined with other medications that could increase its plasma level. Rivaroxaban is a substrate of the cytochrome P450 enzyme-CYP3A4. Diltiazem is a weak-moderate inhibitor of CYP3A4. Hence, concurrent use of diltiazem with rivaroxaban causes an increased plasma level of rivaroxaban, predisposing the patient to hemorrhagic side effects.6

Hemopericardium with tamponade physiology is an uncommon complication of rivaroxaban use. It is important to consider this diagnosis when patients on rivaroxaban present with symptoms of tamponade especially when there is concurrent use of a CYP3A4 inhibitor such as diltiazem. Some other drugs that are inhibitors of the enzyme are amiodarone, verapamil, dronedarone, conivaptan and certain antifungals, to name a few. Though direct oral anticoagulants (DOACs) are convenient to use, this case illustrates the need to consider drug-drug interactions before prescribing them.

YOU ARE HERE: Home > Education and Meetings > Spontaneous Hemorrhagic Tamponade Associated with Rivaroxaban Use