Deep Venous Thrombosis in a Patient with a Complex Medication Regimen

Venous thromboembolism (VTE) includes both deep vein thrombosis (DVT) and pulmonary embolism (PE). In the United States, up to 1 million individuals are affected annually by either DVT or PE, and each year between 100,000 and 296,000 VTE-related deaths occur in the US, and approximately 370,000 occur in Europe.1 As a result, VTE places a considerable economic and clinical morbidity and mortality burden on the health care system.

When approaching VTE, it is important to first identify whether the VTE is a provoked versus an unprovoked or idiopathic VTE. A provoked VTE is one that occurs secondary to a provocative factor, such as surgery or trauma, whereas an unprovoked VTE is characterized by failure to establish an identifiable provocative factor at diagnosis.2 Unprovoked VTEs frequently lead to investigations of thrombophilias or "hypercoagulable states" to help understand why the patient developed a VTE. According to the most recent American College of Chest Physicians (CHEST) evidence-based clinical practice guidelines, provoked VTE should be treated for three months, and unprovoked VTE requires indefinite treatment as long as the benefit of anticoagulation outweighs the risk of bleeding.

A 47-year-old male with a history of depression, hypertension, and human immunodeficiency virus sustains a left ankle fracture after a skiing injury. A cast worn for four weeks was transitioned to a splint last week. The patient presents to your office with cramping pain in the left calf and swelling for the past day and a half. His medications include citalopram, amlodipine, combination emtricitabine, tenofovir, and efavirenz, and a multivitamin. The patient states his schedule has limited flexibility for frequent blood checks and inquires if he can take one of the "new pills" for treatment. Recent bloodwork taken about two weeks ago demonstrates a creatinine clearance of 140 mL/min, white blood cell count of 7.2 thou/uL, hemoglobin 14.3 g/dL, platelet count 200 thou/uL and liver function panel is within normal limits.

An ultrasound of the lower extremities is obtained to assess for DVT. The images are shown below. 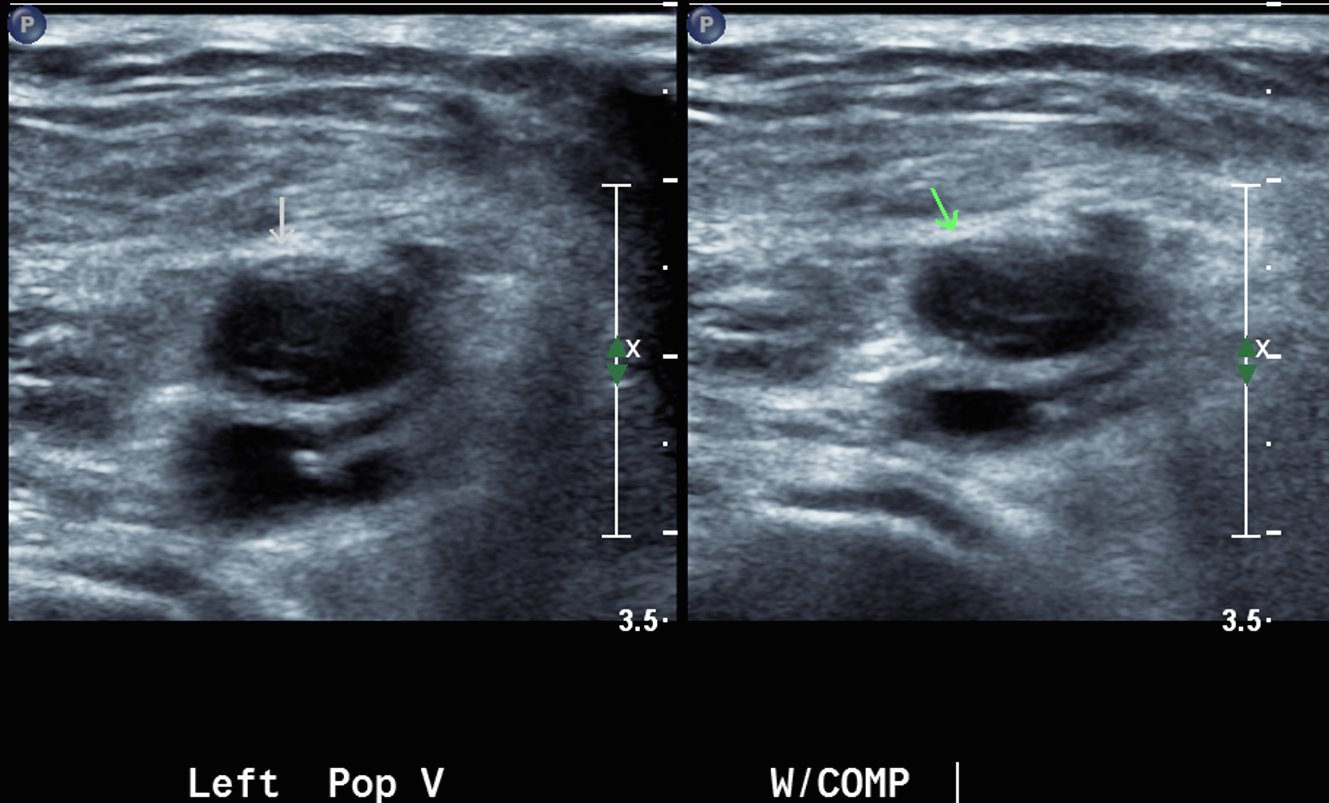 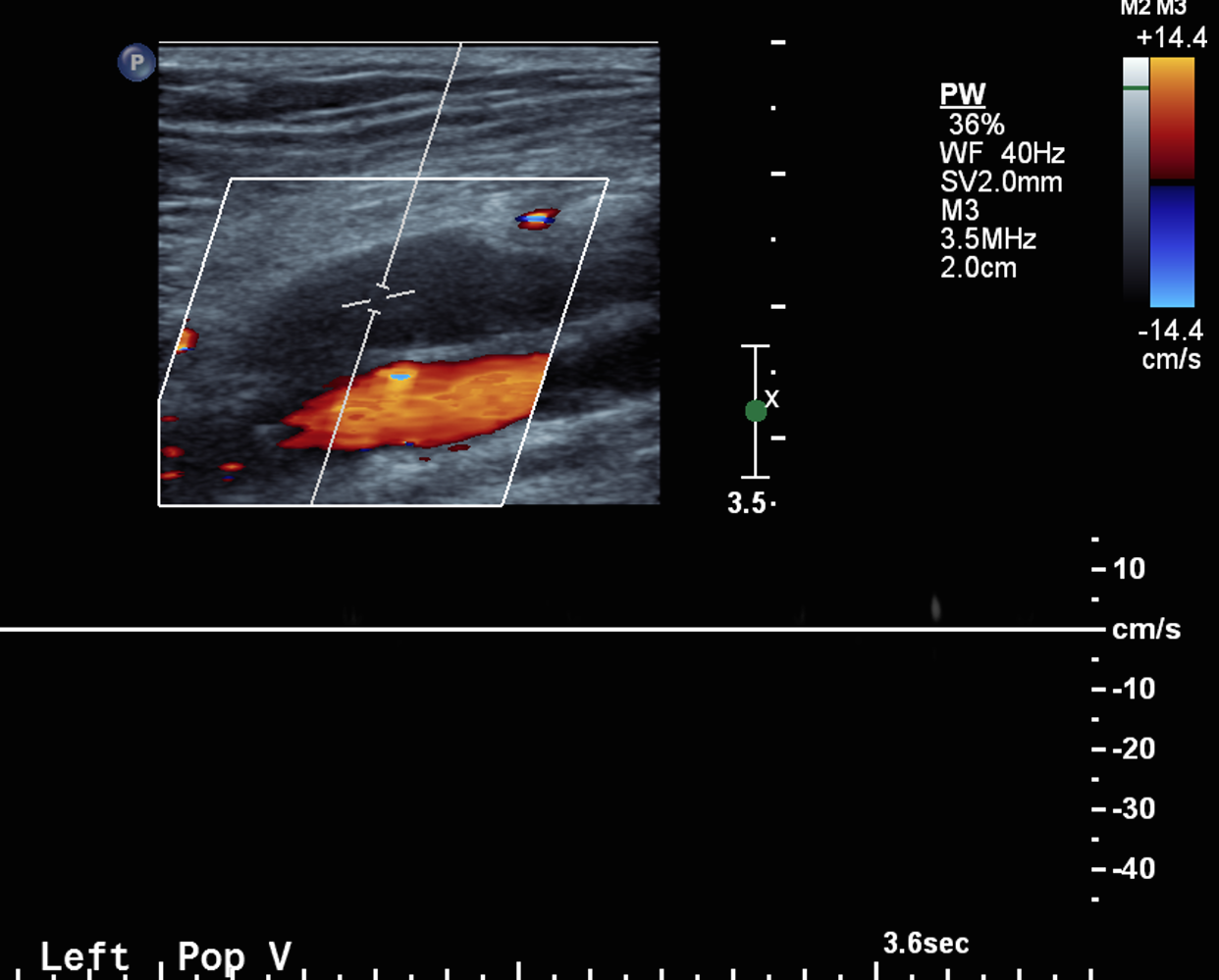 Figure 2 shows a longitudinal view of the popliteal vein demonstrating no flow in the vein by color Doppler.

Which of the following describes is the best course of action for this patient?

The correct answer is: B. Prescribe dabigatran 150 mg bid for anticoagulation after bridging with low-molecular weight heparin (LMWH) for five days.

This patient has a symptomatic acute left popliteal vein DVT, which is considered a proximal DVT. Per the most recent CHEST guidelines (9th Edition, 2012), this patient should be treated for a minimum of three months with full-dose oral anticoagulation for a provoked proximal DVT.3

Option B is correct. Although dabigatran is the best direct oral anticoagulant (DOAC) for this patient (see below), the patient will need to first be treated with a parenteral anticoagulant as "lead in therapy" for at least five days before starting dabigatran.

Citalopram is a selective serotonin reuptake inhibitor and efavirenz is a non-nucleoside reverse transcriptase inhibitor. Both drugs metabolized by the cytochrome P450 (CYP450) enzyme system and caution is advised when using both drugs as they may result in increased citalopram levels, placing patients at higher risk of QT prolongation, cardiac arrhythmias or serotonin syndrome. The only DOAC with no CYP450 interaction is dabigatran, which would therefore be the best choice for this patient. Additionally, dabigatran is the only DOAC with a Food and Drug Administration (FDA)-approved reversal agent available in the United States. Because the original studies of dabigatran for the treatment of VTE were done using a paraenteral anticoagulant to "lead in" to dabigatran (RE-COVER [Efficacy and Safety of Dabigatran Compared to Warfarin for 6 Month Treatment of Acute Symptomatic Venous Thromboembolism] trial),4 this patient would require therapy with either unfractionated heparin (UFH) or a LMWH for at least five days before starting dabigatran. Given the clinical scenario the best option is to start the patient on LMWH at 1 mg/kg bid and then, on day six, begin dabigatran 150 mg PO bid at the time the next LMWH dose would have been due.

The patient should be advised to avoid high-risk activities, such as skiing, skydiving, high-impact sports, operating heavy machinery, etc., while on anticoagulation. The patient should also be counseled that if he sustains any significant impact, such as a motor vehicle accident or head trauma of any degree, he should immediately report to the nearest emergency room. If dabigatran is used, he can be reassured that a reversal agent is available in the hospital for any case of severe bleeding.

Option C is incorrect. Based on pharmacokinetic data, the drug manufacture has recommended adjusted-dose apixaban for patients on strong dual inhibitors of the CYP3A4 and P-glycoprotein 1 (P-gp) system (i.e., ketoconazole, itraconazole, ritonavir, or clarithromycin); however, if other anticoagulants can be prescribed, it would be safer to avoid this combination to help reduce bleeding risk. Inhibitors of CYP3A4 and P-gp augment exposure to apixaban and increase the risk of bleeding. Additionally, it is thought that increased serotonin secondary to inhibition of platelet serotonin uptake contributes to an augmented anticoagulant effect.

If the clinician is still considering apixaban in the above scenario, the dose of apixaban should be decreased by 50% when it is co-administered with drugs that are strong dual inhibitors of CYP3A4 and P-gp. For patients receiving apixaban at a dose of 2.5 mg twice-daily, avoid co-administration with strong dual inhibitors of CYP3A4 and P-gp. The patient should also be advised that although the half-life of apixaban is considerably short (~12 hours), the drug has no FDA-approved reversal agent.

Option D is incorrect. Apixiban is not the best DOAC for this patient, as above. Additionally, apixaban does not require parenteral anticoagulation for "lead in" therapy. It is unsafe to prescribe both a LMWH and apixaban simultaneously as "bridging therapy" as this is not how the drug was intended to be prescribed and doing so will significantly increase the risk of bleeding.

The correct dose of apixaban in the first seven days is 10 mg PO bid, and 5 mg PO bid after seven days.

Option E is incorrect. This patient has an acute proximal DVT and should be treated with at least three months of anticoagulation.

YOU ARE HERE: Home > Education and Meetings > Deep Venous Thrombosis in a Patient with a Complex Medication Regimen