In the United States, the currently available direct oral anticoagulants (DOACs) include dabigatran, rivaroxaban, apixaban, and edoxaban.1 As of 2015, all four agents have been approved by the US Food and Drug Administration (FDA) for the treatment of venous thromboembolism (VTE) and have shown non-inferiority to a vitamin K antagonist in the prevention and treatment of VTE.2-5 Dabigatran is currently the only DOAC that has an FDA-approved reversal agent, idarucizumab, now available for in-hospital administration in the United States.6 Idarucizumab is a monoclonal antibody fragment that binds specifically to dabigatran with an affinity more than 350 times that of thrombin, resulting in neutralization of dabigatran's anticoagulant ability. Clinical trials are currently under way to develop "antidotes" or specific reversal agents for Xa inhibitors such as rivaroxaban and apixaban. While there is no FDA approved reversal agent yet for the other three DOACs, in 2011, Eerenbur and colleagues studied 12 patients and demonstrated that prothrombin complex "immediately and completely reverses the anticoagulant effect of rivaroxaban in healthy subjects;" however, this effect was not seen on the anticoagulant action of dabigatran.7

A 69-year-old female with a past medical history of controlled hypertension, diabetes, dyslipidemia, hypothyroidism, and gastroesophageal reflux disease is admitted for abdominal pain. She is found to have acute cholecystitis and undergoes a laparoscopic cholecystectomy. Postoperatively, the patient has an uneventful course and is on appropriate deep venous thrombosis (DVT) prophylaxis. One week after discharge, the patient presents to your office and complains that her right leg is swollen, warm, and painful. A venous duplex ultrasound is performed in the office. The images are shown below. 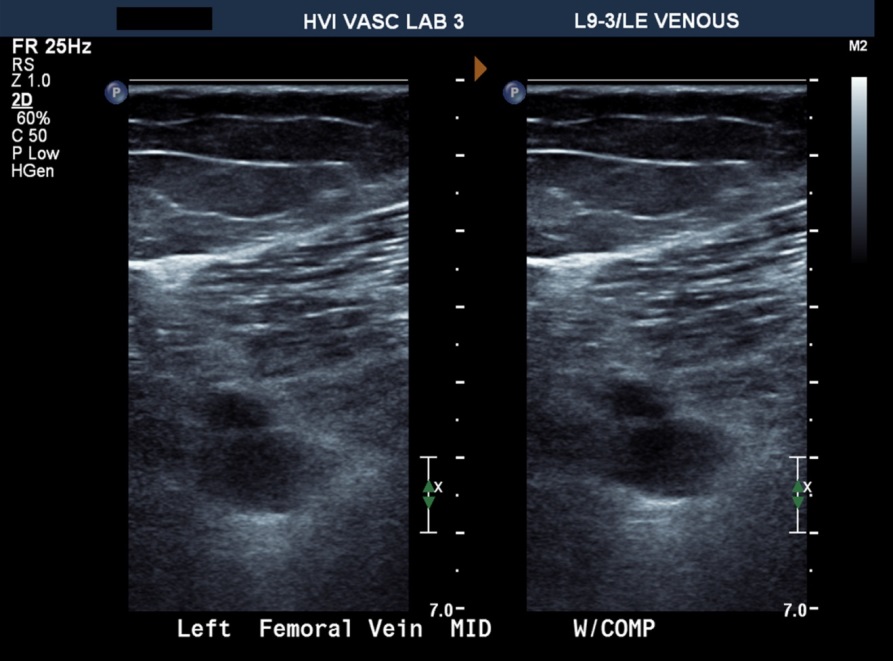 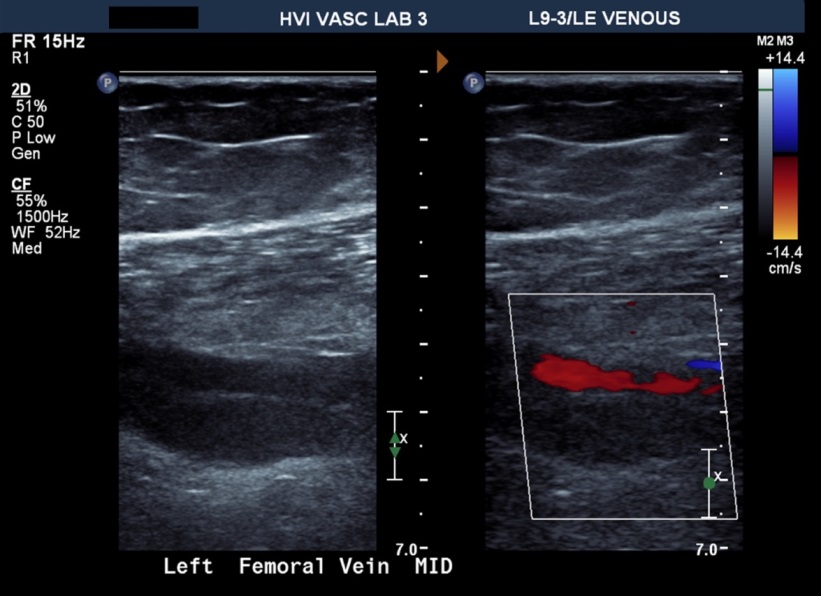 When questioned, the patient denies ever having a gastrointestinal (GI ) bleed, but a doctor told her "a long time ago" that she had an ulcer in her stomach; no esophagogastroduodenoscopy was ever performed. Pertinent laboratories include hemoglobin of 13.2 g/dL, MCV of 90.2, platelet count of 193, creatinine of 1.2, and creatinine clearance of 82 mL/min. Aspartate aminotransferase and alanine aminotransferase are within normal limits.

Which of the following is the best DOAC for this patient?

The correct answer is: B. Apixaban.

Apixaban would be the best DOAC in this patient as the Initial Management of Pulmonary Embolism and Deep-Vein Thrombosis as First-Line Therapy (AMPLIFY) trial demonstrated a 0.44 (0.36-0.55, p < 0.001) relative risk reduction in major bleeding or clinically relevant non-major bleeding in the apixaban versus the control group.4 A note is made that in the AMPLIFY trial patients were treated with anticoagulation with apixaban for six months. The minimum treatment period is three months for a provoked DVT; at three months the risks versus benefits to continue anticoagulation can be re-evaluated, and it is safe to stop it at this time if there is no reason to continue anticoagulation. Apixaban dosing for venous thromboembolism is recommended at a dose of 10 mg twice daily for seven days, followed by 5 mg twice daily for three to six months, despite baseline kidney function. This is in contrast to the dosing recommendation for stroke prophylaxis for atrial fibrillation, in which the usual dose is 5 mg twice-daily, with a decreased dose recommendation of 2.5 mg orally bid in patients with at least two of the following: >80 years of age, <60 kg, or creatinine >1.5.

Although the patient has never had an episode of GI bleeding and has no evidence of microcytic anemia suggesting GI bleeding, given her vague history of a clinically diagnosed ulcer or gastritis in the remote past, consideration should be given that she is at slightly higher risk of developing GI bleeding. Her age (>65-years-old) and borderline kidney function should also be considered. It is crucial when evaluating patients for any anticoagulation, especially a DOAC, to specifically ask about bleeding events and identify the patient's bleeding risk.

Although traditional low molecular weight heparin to warfarin can be used, the question specifically asked which DOAC is the preferred agent. As a vascular specialist, it is crucial to coordinate with surgeons and proceduralists to determine when full-dose anticoagulation can be safely started after a procedure or surgery. It would reasonable to start a DOAC one week after a laparoscopic cholecystectomy in a young patient with less than moderate bleeding risk, but it would be prudent to discuss anticoagulation with the surgeon before prescribing.

With the push for shorter length of stays, the DOACs are an enticing option to discharge a patient more expeditiously. However, the diligent clinician must carefully weigh the patient's bleeding risk after each procedure or surgery against a perceived hospital outcome for length of stay. Patients with moderate or greater risk of bleeding should be observed in the perioperative period, and the decision for timing and intensity of anticoagulation should optimally be managed by a vascular specialist in coordination with the surgical team.

Option A is incorrect. In the RE-COVER (Efficacy and Safety of Dabigatran Compared to Warfarin for 6 Month Treatment of Acute Symptomatic Venous Thromboembolism) trial, a trend was noted for increased GI bleeding in patients treated with dabigatran (53 vs. 35 GI bleeds in dabigatran vs. warfarin groups), and dyspepsia was noted to be of significantly higher prevalence (3.1% vs. 0.7% p < 0.001) in the group treated with dabigatran.2

Option C is incorrect. Although the patient has had a recent surgery, the acute DVT should be treated with anticoagulation. There should always be a discussion with the surgeon about the bleeding risk after surgery. If the patient is still hospitalized, and the surgery more recent, observing the patient in the hospital for a few days on intravenous heparin before starting a DOAC could be considered. If anticoagulation is deemed unsafe or contraindicated, a retrievable inferior vena cava filter would have to be placed before discharge, with plans for removal as soon as the patient could tolerate full-dose anticoagulation.

YOU ARE HERE: Home > Education and Meetings > Venous Thromboembolism, Anticoagulation, and Risk of Bleeding