Measurement of cardiac troponin (cTn) has revolutionized the evaluation and management of patients with suspected acute coronary syndrome (ACS). Recent consensus statements endorse the use of cTnI or cTnT as the biomarker of choice for such application.1 In order to maximize sensitivity for diagnosis of ACS, as well as for superior prognostication, these same consensus statements endorse the use of the lowest cTn cut-off point, down to the “99th percentile” of a normal population as long as the assay used delivers imprecision < 10% at this cut-off point.1 While the most widely-used conventional cTn methods cannot deliver this combination of sensitivity and precision, novel very high sensitivity cTn (hsTn) assays have now been developed; these assays have a greatly improved detection limit (10- to 100-times lower than that of currently available commercial assays) with improved precision.2 hsTn assays are soon to be more widely used. 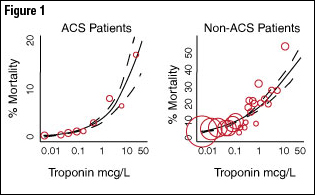 Despite the value of cTn for ACS diagnosis, risk stratification and management, it has become quite evident that non-ACS elevation of the marker is not uncommon. In a recent study examining 69,299 patients admitted through the emergency department(ED), 48% had their cTn measured. Of these, 2,344 patients (3.3% overall, or 7.0% of those that had a cTn measured) had an elevated cTn concentration. Of those with a positive cTn, 42.7% of the patients did not have ACS.3

Given this fact, and the emerging use of hsTn assays, clinicians should understand that cTn is not solely a biomarker of ischemic myocardial infarction (MI), and such clinicians must be well-versed in the differential diagnosis of an elevated cTn value outside of ACS, in order to avoid unnecessary and potentially harmful misdiagnosis and treatment for presumed ACS, while also avoiding delay in the correct treatment for the underlying cause of the elevated value. Indeed, independent of mechanism, non-ACS cTn elevations are most often prognostically meaningful (Figure 1).

The cTn complex is found both in the sarcomere (accounting for ~95% of cTn in the heart) as well as to a lesser extent in the cytosol of cardiomyocytes. In the setting of irreversible myocardial cell injury, the contents of the cTn complex are released into circulation. With older conventional assays, cTnI or T is typically measurable as early as 3-4 hours following myocardial injury. However, when using hsTn assays, a rising (or falling) pattern may be seen as early as one hour after myocardial injury.4 Importantly, the phenomenon of cTn release is independent of mechanism—thus, cardiomyocyte necrosis of any kind—ischemic, infectious, toxic, or otherwise—is not infrequently detectable.

In general, the prevalence of cTn elevation in the general population is low when currently available assays are used. A community-based sample of 3557 participants showed that the frequency of elevated cTnT using was 0.7%,5 and typically associated with risk factors for heart disease or heart failure (HF). Importantly, even minimally elevated cTn levels in asymptomatic, apparently healthy older adults have been shown to be associated with adverse outcomes; having elevated cTn increased the risk of all-cause and cardiovascular mortality two-fold.6

Cardiac Tn is most commonly measured for the evaluation of chest discomfort and in this context, a rising and/or falling pattern of cTn should be interpreted as being reflective of ACS. However, many non-ACS diagnoses should be kept in mind as potential cause for cTn elevation

Both acutely decompensated and chronic HF are associated with elevated cTn values, which may frequently be substantial. Elevation of cTn in the context of HF often occurs in the absence of coronary ischemia, and frequently occurs even in the absence of coronary artery disease. Various mechanisms for HF-related cTn elevation have been proposed, including subendocardial ischemia from wall tension, apoptosis, spontaneous necrosis, as well as inflammation. Linked to ventricular remodeling, elevated cTn in HF should not be discarded as ‘false positive’ as the prognosis associated with elevated cTn in this setting is poor.7

An important non-ACS diagnosis to consider in a patient presenting with chest pain and elevated cTn is acute aortic dissection (AAD). Cardiac Tn is elevated in up to 18% of patients with AAD,8 indicative of the high acuity of illness than specific to aortic dissection itself, although coronary artery occlusion in this setting is well-described.9 Misdiagnosis of AAD may potentially result in incorrect administration of anticoagulation therapy, or lead to a risky delay in the correct diagnosis.10

Another common non-ACS cause of chest pain and cTn elevation is pulmonary embolism (PE).11 The frequency of elevated cTn is 10-50% in such patients,12-13 and may be related to a combination of acute right ventricular strain and injury, hypoxia and tachycardia. Elevated cTn is strongly associated with mortality in acute PE; in a meta-analysis of 20 acute PE studies, patients with an elevated cTn had more than 5-fold increase in mortality (19.7% vs. 3.7%).14

Other relevant cardiac diagnoses that may present with both chest pain and elevated cTn include post-revascularization myocardial injury states, myocarditis (where cTn elevations are common and prognostically meaningful),15-16 acute pericarditis,17 and blunt force trauma to the heart.18

In the context of life-threatening illness, the prevalence of elevated cTn is considerable (table 1). In 1130 patients presenting to an emergency department (ED) without chest pain, the frequency of elevated cTn was 3.6% and was associated with an increased mortality.19 This prevalence increases further in population presenting with chest pain to 4.5%,20 while in critically ill patients without ACS, the frequency ranges from 27% to 55%.21

An elevation of cTn in such situations may in fact have an ischemic origin: a recent study demonstrated that an elevated hsTnT in patients without ACS was strongly associated with the presence and severity of coronary artery disease and heart muscle disease, implying that non-ACS cTn elevation may result from coronary ischemia in the absence of plaque rupture or coronary thrombosis; this situation of supply-demand mismatch is known as a Type II MI.22

Common causes of non-ACS cTn elevation in the acutely ill patients include severe hypertension or hypotension,23 severe upper gastrointestinal bleeding,24 as well as systemic inflammatory response syndrome (with or without acute respiratory distress syndrome); in each case, elevated cTn is often associated with myocardial dysfunction and worse prognosis.25 Severe central nervous system injury due to an acute stroke or head trauma may cause elevated cTn values.26 Lastly, cardiotoxic chemotherapy is well recognized to increase cTn, and when this occurs, it can help to identify a patient at risk for cardiomyopathy.27-28

Troponin elevation in CKD is worth discussion, as the interpretation of elevation of cTn in non-ACS patients may be difficult. Elevated cTn in asymptomatic CKD is common, the frequency which is dependent on the assay (cTnT > cTnI) and cut-off value used. Due to this fact, the specificity of cTn for ACS in this patient population is lower compared with patients without renal disease. This is of course problematic, as the incidence and prevalence of coronary artery disease and ACS is high in this population.

While cTn elevation in CKD necessarily leads to a higher risk for false positive ACS diagnosis, cTn values in this setting are to be taken seriously; a true positive cTn related to ACS in patients with CKD is associated with a heightened risk for mortality29 compared to non CKD patients, while an asymptomatic elevation in cTn in severe CKD is associated with an increased incidence of ACS30 and a 2- to 5-fold increase in mortality.31 Serial measurement, observing for a rise and/or fall of an elevated cTn value in a patient with CKD is recommended to differentiate ACS from non-ACS causes of cTn elevations.

Cardiac Tn elevations have been reported in patients with snake or scorpion bites, and thought to be in part due to myocardial injury by biologic toxins, vasospasm and coagulation abnormalities.28 Elevated cTn levels have been reported to be frequently elevated in asymptomatic athletes who complete endurance exercise. The exact mechanism by which cTn release occurs in this setting remains unknown but may be due to right ventricular injury.32

Elevated cTn values outside of ACS are not uncommon and reflect cardiomyocyte necrosis from a wide array of cardiac, pulmonary and systemic diseases. The growing use of hsTn assays will no doubt lead to more frequent detection of elevated cTn values, thus the topic is timely. The clinician is advised to be familiar with the broad differential diagnosis of an elevated cTn, to avoid false attribution of “acute MI” to a patient without an ACS. Importantly, an elevated cTn in the absence of ACS is most often associated with a worse prognosis and should not be disregarded as a ‘false positive’ result.