As a result of the landmark clinical trials RE-LY,1 ROCKET AF,2 and ARISTOTLE,3 which compared warfarin to a novel oral anticoagulant—dabigatran, rivaroxaban, or apixaban, respectively—the pharmacological options for managing stroke risk in patients with non-valvular atrial fibrillation (NVAF) have expanded. The challenge is to translate these trials into clinical practice. Thus, it is important to understand the patient populations, design, and results from these trials to guide clinical practice.

Clinicians must be aware that patients in RE-LY, ROCKET AF, and ARISTOTLE were highly selected and therefore the trial results may not be applicable to all patients with atrial fibrillation (AF) in their practice.1-4 Baseline characteristics for the study populations are displayed in Table I. 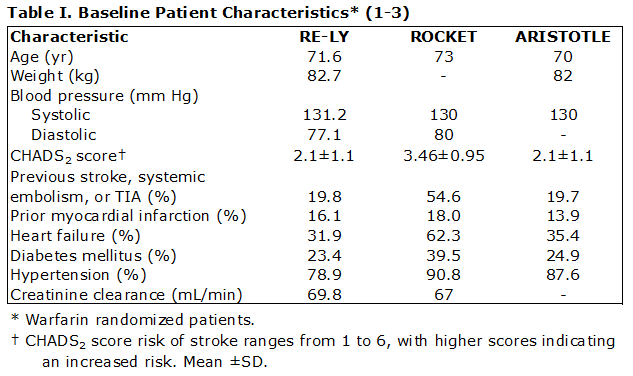 Thus, dabigatran, rivaroxaban, and apixaban have been indicated specifically for non-valvular AF. The rationale for excluding patients with mitral stenosis was the associated high risk, as well as the potential need for surgery or intervention, during the trials. Patients with prosthetic heart valves were excluded based on their existing need for long-term anticoagulation.

Outside of the clinical trials, NVAF has not been well defined. The FDA has attempted to communicate the valvular considerations for these drugs in the prescribing information. Per the FDA, dabigatran is contraindicated in patients with mechanical prosthetic heart valves (as a result of the early termination of the RE-ALIGN study);5, 6 additionally, it cannot be recommended in patients with bioprosthetic valves.7 Valvular considerations are not described by the FDA for rivaroxaban.8 With apixaban, the FDA reports that it is not recommended for use in patients with prosthetic heart valve.9

A clearer definition of NVAF for guiding the clinical use of dabigatran, rivaroxaban, and apixaban is in order, and proposed herein. Based on the clinical trial designs for these agents1-4 and the current FDA guidelines,7-9 NVAF is defined as atrial fibrillation without the presence of hemodynamically relevant mitral valve stenosis or prosthetic heart valve (mechanical or biological). Thus, the presence of mitral valve stenosis or prosthetic heart valve is absolutely contra-indicated with dabigatran, rivaroxaban, and apixaban. Vitamin K antagonists are the only oral anticoagulants approved for long-term anticoagulation in patients with mechanical or biological prosthetic heart valves or hemodynamically significant mitral stenosis.

Patients on hemodialysis or those with a creatinine clearance (CrCl) < 30 mL/min (RE-LY, ROCKET) or < 25 mL/min (ARISTOTLE) were excluded.1-4 Dabigatran blood levels are most influenced by renal function, as 80% is cleared by the kidneys and in proportion to renal blood flow.10 In comparison, renal excretion accounts for 36% of total elimination for rivaroxaban,11 and 25% for apixaban.12

For dabigatran use, CrCl must be >30 mL/min for both the 110 mg BID and 150 mg BID doses. For the 75 mg BID dabigatran dose, only approved in the United States, the CrCl must be between 15 and 30 mL/min.7 For rivaroxaban, with CrCl >50 mL/min, the 20 mg once daily dose is recommended; with CrCl between 15 and 50 mL/min, 15 mg once daily is recommended.8 For apixaban, the recommended dose for most patients is 5 mg BID, however 2.5 mg BID is recommended for patients with serum creatinine ≥1.5 mg/dL.9 Judgment must be used in patients when CrCl approaches borderline levels. Clinicians should opt for safety and consider prescribing warfarin in patients with marginal renal function.13

Monitoring renal function is of particular importance in patients on dabigatran (80% renal clearance). In assessing renal function, the preferred method is creatinine clearance by comparison of plasma and urine creatinine levels. An alternative measure of CrCl can be obtained by the Crockoft-Gault formula, calculated based on plasma creatinine, age, body mass, and gender. Crockoft-Gault derived CrCl is more accurate than estimated glomerular filtration rate (eGFR), and eGFR can lead to higher dosing, putting patients at a greater risk for bleeding.14 The eGFR does not account for body mass and is not valid in patients age ≥ 75 because muscle mass normally decreases with age; eGFR is calculated based on plasma creatinine, age, ethnicity, and gender. Plasma creatinine is influenced by multiple variables such as muscle mass, protein in the diet, gender, and concomitant medications, important considerations for accurately assessing renal function.

Plasma concentration of the novel agents is affected by interaction with the efflux transporter P-glycoprotein (P-gp). Dabigatran etexilate (prodrug), rivaroxaban, and apixaban all act as a substrate for P-gp. Absorbed dabigatran etexilate, as an example, is 'pumped' back into the intestinal tract. P-gp inducers, inhibitors, and competitors all must be carefully considered in the context of the novel anticoagulants.15

Co-administration with P-gp inducer rifampicin is contraindicated with dabigatran, rivaroxaban, and apixaban because it might reduce drug concentrations to sub-therapeutic levels. In general, P-gp inducers (such as carbamazepine and St. John's wort) should be avoided with the novel agents.15, 16

Additionally, proton pump inhibitors may reduce absorption of dabigatran;17 no effect has been shown for rivaroxaban,20 and results are pending for apixaban.

The pro-drug dabigatran etexilate is converted to its active moiety, dabigatran, by tissue esterase. Dabigatran functions as a direct thrombin inhibitor. Dabigatran was compared to warfarin in the Randomized Evaluation of Long-term Anticoagulation therapY (RE-LY) trial, an open label comparison of dabigatran (110 mg BID or 150 mg BID in a blinded fashion) and adjusted-dose warfarin in 18,113 patients over a median follow-up period of 2.0 years.1

In the RE-LY trial, patients were distributed equally across all risk strata (CHADS2 score 0-1, 31%; 2, 33%; and >2, 32%).21 The time in therapeutic range (TTR) for those randomized to warfarin was 64%. Half of the patients were naïve to oral anticoagulants. The primary efficacy outcome was stroke (of any type) and systemic embolism, with any major bleeding being the primary safety outcome. The trial was designed as a non-inferiority trial.1, 4 Key results summarized:

Rivaroxaban is a direct factor Xa inhibitor that can be administered in a once daily dose. Rivaroxaban Once daily oral direct factor Xa inhibition Compared with vitamin K antagonism for prevention of stroke and Embolism Trial in Atrial Fibrillation (ROCKET AF) was a randomized double-blind comparison of rivaroxaban (20 mg daily, 15 mg if creatinine clearance was 30-49 ml/min) to warfarin among 14,264 patients.2

The study population in ROCKET AF was fundamentally different in that patients were selected from a higher stroke-risk strata; those with two or more additional risk factors, compared to only one additional risk factor in RE-LY and ARISTOTLE. Thus, patients in ROCKET AF had a greater mean CHADS2 score (3.46) compared to RE-LY (2.1) and ARISTOTLE (2.1). Warfarin patients had a mean TTR of 55%. The primary efficacy outcome was stroke or systemic embolism, and non-inferiority was the primary hypothesis. The main safety outcome was clinically relevant bleeding.2 Key results summarized:

A direct factor Xa inhibitor, apixaban, was first compared to aspirin in a double-blind study of 5,599 patients deemed unsuitable for vitamin K antagonist therapy (AVERROES),23 which was prematurely terminated due to the clear superiority of apixaban for preventing stroke or systemic embolism in AF. Bleeding risk between the two treatments was similar.

In the Apixaban for Reduction In STroke and Other ThromboemboLic Events in atrial fibrillation (ARISTOTLE) trial, apixaban (5 mg twice daily) was compared to warfarin in a double-blind, randomized trial among 18,201 patients with AF.3 Patients were followed for a mean of 1.8 years. The primary efficacy outcome was stroke or systemic embolism, which was tested for both non-inferiority and superiority. The primary safety outcome was major bleeding. For warfarin treated patients, the TTR was 62%. Key results summarized:

The patient populations studied, design, and results from RE-LY, ROCKET AF, and ARISTOTLE guide the use of dabigatran, rivaroxaban, and apixaban in clinical practice. Pharmacokinetic, dosing, and drug interaction studies with these agents are invaluable. Individual decisions need to be made in individual patients. Each agent has exceeded expectations in clinical trials. The short half-life of these agents requires strict compliance, as missing even a single dose could diminish protection from stroke. Antidotes do not exist for any of the novel oral anticoagulants, however bleeding rates from the clinical trials are either non-inferior or superior to warfarin. The optimal application of these agents has the potential to reduce millions of strokes related to AF.

YOU ARE HERE: Home > Latest in Cardiology > Dabigatran Etexilate, Rivaroxaban, and Apixaban: Translation of Clinical Trials into Practice for Stroke Prevention in Non-Valvular Atrial Fibrillation