Primary Prevention of CVD With a Mediterranean Diet

Multiple observational cohort studies and one secondary prevention trial have documented that Mediterranean-style diets are associated with a substantially reduced risk of cardiovascular disease (CVD). Although there is no uniform definition of a Mediterranean diet, it generally consists of:

The aim of this randomized trial was to examine whether adherence to a Mediterranean diet led to the prevention of cardiovascular events (myocardial infarction, stroke or death from cardiovascular causes).

The primary end point was to measure the rate of major CV events (MI, stroke or death from CV causes). 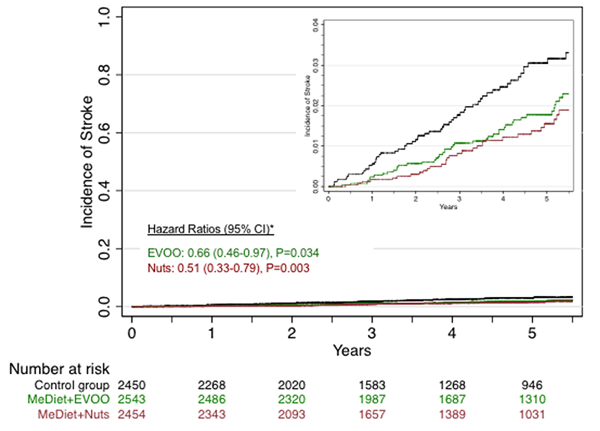 Interim analyses prompted early termination of the trial at 4.8 years. Both MeD diet groups adhered to the intervention per self-reported intake and biomarker test results. As compared with control group, the two groups that received advice on a MeD diet plus EV olive oil or nuts reduced the risk of CVD by approximately 30% & stroke 50%. The multivariable-adjusted hazard ratios were 0.70 (95% confidence interval [(CI), 0.54 to 0.92] with extra virgin olive oil (96 events) and 0.72 (95% CI, 0.54 to 0.96) for the Med Diet Group with nuts (83 events) versus the control group (109 events). At three months after randomization, both Mediterranean Diet groups (extra-virgin olive oil & the mixed nuts) significantly lowered blood pressure.

In older subjects at high cardiovascular risk, a Mediterranean diet supplemented with extra-virgin olive oil or nuts reduced the incidence of major cardiovascular events in the absence of weight gain.

The reduction in CVD was most evident for stroke, an outcome associated with reduction in blood pressure. This study confirmed that unsaturated fats such as extra virgin olive oil or mixed nuts when added to an otherwise cardio-protective diet reduced the incidence of major cardiovascular events in the absence of weight gain. In 2006 Estruch et al. had shown that at three months follow up both intervention groups had a significant reduction in blood pressure compared to the control group.

Saturated-fat intake was similar in all three groups, approximately 9% of energy intake. In the extra-virgin olive oil supplemented group, monounsaturated fats (n-9) contributed the additional four percentage points. In the mixed nuts supplemented group, two percentage points were derived from monounsaturated (n-9) fats and two percentage points from polyunsaturated fats (n-3 and n-6). To improve adherence to dietary intervention, group 1 and 2 participants were provided extra virgin olive oil and nuts respectively. Since all three groups consumed a high fat diet, it is possible that supplementation with extra virgin olive oil and nuts and additional dietary counseling sessions with the registered dietitians were responsible for the outcomes. Dietary advice was also associated with a modest increase in legume and fish consumption in both intervention groups. No other major differences were noted in nutrient intake or food groups between the intervention and control groups.

Limitations of this study include 1) Discrepancy in the protocol on the number of counseling sessions provided by registered dietitians to the two treatment groups versus control group. While the two MeD diet groups received quarterly individualized and group interventions from registered dietitians throughout the study period (4.8 years), the low fat diet control group received only one session per year for the first three years. This lower intensity of dietary intervention in the control group could have led to a bias toward a benefit in the two Mediterranean diet groups, 2) A higher drop-out rate was noted in the control group possibly because they did not receive the same intensity of counseling and support as the two intervention groups, 3) Study results cannot be generalized to the entire world population as the study participants were living in a Mediterranean region and were therefore already following a Mediterranean dietary pattern, and 4) Despite advice to lower fat intake and limit consumption of olive oil and nuts, the total fat consumption in the control group was also high (37% of energy intake) versus 41% in the two intervention groups.

Observational studies have shown that Mediterranean-style diets and olive oil are associated with reduced risk of stroke. An accompanying commentary by Appel and Vanhorn stated "Reductions in blood pressure probably contributed to observed reductions in cardiovascular disease. However, the effects of the interventions on known blood-pressure determinants (i.e., weight and dietary sodium and potassium intake) are unknown. Policymakers already recommend consumption of a Mediterranean-style diet on the basis of a persuasive body of evidence from observational studies. Our sense is that the policy implications of the PREDIMED trial relate primarily to the supplemental foods. A Mediterranean-style diet with increased consumption of mixed nuts or substitution of regular olive oil with extra-virgin olive oil has beneficial effects on cardiovascular disease". However, many unanswered questions remain such as 1) Will the benefits of extra-virgin olive oil and mixed nuts accrue to persons consuming other diets?, 2) Does high consumption of extra-virgin olive oil and mixed nuts lead to weight gain?, and 3) Can the benefits of extra-virgin olive oil and mixed nuts occur at lower doses?

YOU ARE HERE: Home > Latest in Cardiology > Primary Prevention of CVD With a Mediterranean Diet