Get to Know Your Leaders | The year was 1971. For the first time, an inner-city Chicago high school chess team captain earned his place in the Illinois State Chess Championship Tournament. A few years later, that same student – as an undergraduate at the University of Chicago – became the last University of Chicago tennis team captain to play in the Division II NCAA Championships. 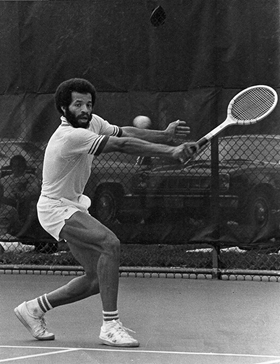 That student was Kim Allan Williams, Sr., MD, FACC, who jokes that in his day there was no Division III.

“My favorite hobby has long been tennis – playing, coaching and supporting the Grand Slam tournaments,” he says. This year, he earned a pin commemorating his 35 years of service to the United States Professional Tennis Association. However, Williams eventually went on to do big things beyond tennis – ultimately in the field of medicine.

This year, Williams can add ACC President to his long list of accomplishments both on and off the tennis court as he takes the reigns March 2015 at ACC’s Annual Scientific Session in San Diego, CA.

“Now my passion for imaging hearts with cardiac computed tomography and nuclear seems to have overtaken tennis a bit,” he says. “There are fewer sore joints with the newer hobby.” This “new hobby,” which is an outgrowth of his 34-year career as a cardiologist, was born decades ago as a child on the south side of Chicago, IL. “Access to health care was a struggle for me as a child,” he says. “That became my career goal – improving inner-city health.”

After completing his undergraduate education in 1975, Williams went on to attend medical school at the University of Chicago’s Pritzker School of Medicine where, due to those early memories of health care access issues in Chicago, he initially targeted inner-city private practice as his career path. Under the influence of medical school mentors who described the “importance of working in a field in which your aptitudes lie,” Williams modified his focus to cardiology.

He then completed his internal medicine residency at Emory University, and overlapping fellowships in cardiology, clinical pharmacology and nuclear medicine at the University of Chicago. He was on faculty from 1986 to 2010, progressing up to professor of medicine and radiology, and director of nuclear cardiology at the University of Chicago’s Pritzker School of Medicine. In 2010, he became the Dorothy Susan Timmis Endowed Professor and chair of the division of cardiology at Wayne State University School of Medicine in Detroit, MI. Three years later, Williams assumed his current position of James B. Herrick Professor and chief of the division of cardiology at Rush University Medical Center in Chicago.

Williams’ first exposure to the ACC was more than 30 years ago at the ACC’s 35th Annual Scientific Session in New Orleans, LA. He was a first-year cardiology fellow and eager to learn. “The excitement of new science and intense learning was almost overwhelming,” he says. “I returned from the meeting armed with new information about the diagnosis and treatment of heart disease that I could deploy immediately at the point of care.” Since that meeting in 1983, Williams has taken on numerous leadership and volunteer roles within the College, including serving as chair of the Cardiac Imaging Committee, the Cardiovascular Imaging Collaborative, the Coalition of Cardiovascular Organizations and the Cardiac Imaging Council. He has also been an ACC delegate to the American Medical Association since 2000.

However, Williams believes his ACC involvement has truly reached a pinnacle as he takes on the role of ACC President. “It’s always an honor to be selected by your colleagues for leadership in any position, but the opportunity of leadership within ACC is the highest privilege to which I could have ever aspired,” he says. “That, of course, is balanced by a sense of responsibility and awe at the sheer magnitude of what needs to be accomplished by the College in cardiovascular care and education, both domestically and internationally.”

He calls it a privilege to play a role in helping the ACC achieve its goals and says that the goals he has for his presidential year are not personal in nature. Instead, he plans to take the opportunity to further the College’s mission to improve heart health. He says that “we have developed strategies around population health, both domestically and internationally, enhancing member value, transforming care and maintaining both quality and access in the coming era of value-based purchasing, increasing our digital tools to personalize education, and shaping the future of public health policies through advocacy at the state and national levels.”

When it comes to the landscape of cardiology, Williams believes that it is “at a crossroads – with cardiologists in the crossfire, and certain subspecialties, like cardiac imaging, in the crosshairs.” The biggest challenges Williams sees facing the field of cardiology today include delivering higher-than-ever-before care with declining reimbursement and rising costs, training the next set of physicians and scientists with declining grant funding and potential graduate medical education cuts, and maintaining access to diagnostic testing for our patients. “Patients in the U.S. are living longer, and decreasing mortality increases the prevalence of heart disease,” he said. “The challenge is to improve efficiencies in care pathways, while focusing more on prevention.” He adds that “[cardiologists] are often characterized as mopping up the water on the floor while the sink continues to overflow. We need to turn off the spigot.”

To meet these challenges Williams believes that the College has an immense opportunity to help both patients and cardiovascular professionals. “The ACC has a deep well of programs and processes, including training guidelines, registries, clinical expert documents, appropriate use criteria, sub-subspecialty sections and educational venues,” he explains. “The College is therefore well-positioned to work with legislators and regulators during this upcoming transformation from volume-to-value, while preserving patient access to guideline-driven appropriate care, which the ACC continues to help define.” He adds that the College will continue to refine education and training to improve care and lower costs.

“One cannot accomplish these positive changes for the future without considering the next generation of cardiovascular professionals who will receive the torch of leadership in the coming years.” Williams urges future leaders to make an impact by getting involved, learning the issues, and in turn, creating usable solutions. “The ACC has a track record of excellence and innovation that is unparalleled,” he says. “When decisions are made, they are made with the principle of ‘leading with the patient,’ that is, putting what is best for our patients first.” Williams adds that with this in mind, “the next set of leaders will create the innovations that we will need for the next generation, and that other specialties can follow.”

Although Williams is a lifelong athlete, esteemed clinician and respected leader, perhaps most importantly, he is a father and husband. “I had four children until last May, when I married Amy Williams, PharmD, and now we have six,” said Williams. “Together we have three boys and three girls: three physicians, one U.S. marine, one insurance marketing manager and one college student.”